There's a great deal of "almost there" going on here right now.  It's been "almost autumn" for the last couple of weeks.  Cooler mornings, sometimes cooler days -- and sometimes days in the twenties Celsius -- from low to high!

All the while the leaves are turning, the grass has stopped growing, the geese are trying to figure out which way is "south" -- but my cherry tomatoes have refused to believe it's not summer!  Believe it or not, I picked these yesterday -- September 29 -- in central Alberta, Canada, Zone 2a to 3 (depending on who you ask).  Go figure! 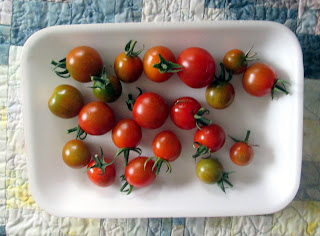 All that aside, I'm getting there with "Growth Chart" -- perhaps the most ambitious piece I've got on the go at the moment.  This is not just due to size, but also to the fact it's intended to be a 2022 Xmas gift!  So as mentioned in my last post, I focused on it for the better part of a week last week.  Here's where I left it on August 22nd: 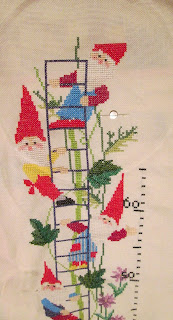 and here's where it is now: 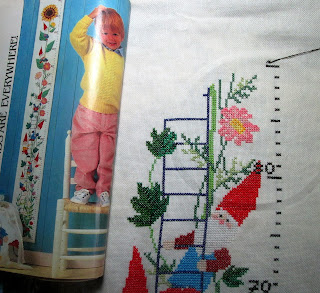 Lest you get your gnomes confused, the fellow with half a hat in August now has a full hat, and has discovered leaves and flowers growing behind, around and above him.  The next gnome goes on that blue step to the left of the ginormous pink blossom -- in about 10 days from now.

With a few days left in September, I turned to the September "Back to School" mini-bouquet from Jeannette Douglas -- the 9th installment of her free informal SAL for 2022, which I'd not even touched.

These are delighfully tiny and colourful stitches, so I finished it up yesterday (Sept. 29): 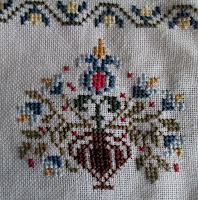 And here's what it looks like next to its mates: 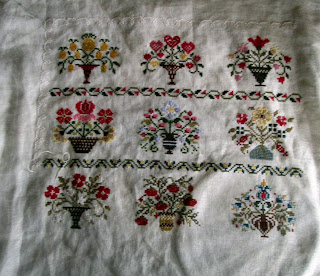 There's another border running horizontally below the bottom three; I've done just enough of it -- plus the border on the left side -- to enable me to place the October motif properly.  Coming soon!  😉

What next?!  Well...it's less than 3 months till Xmas now, and for those of us who give hand-made gifts, that means "Get a move on, eh?!"

So...I've returned to the "Quaker du Japon" from Jardin Prive, starting now on a rather large motif that's pretty much dead centre in the piece. Here's the model photo (from Traditional Stitches shop site, which is where I bought the pattern): 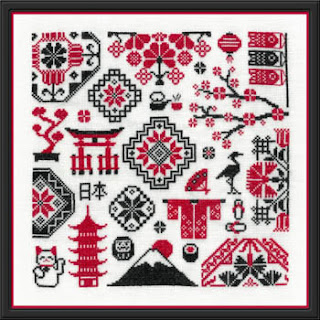 See that BIG red and black motif in the centre?  Yep!  That's the one on which I'm working!  I'm about 1/4 of the way around the outer two black borders.  Having started at the top, I'm now making my way counter-clockwise around the design.  That's because I'm working from left to right across the piece, so I've positioned each motif based on what's either above it or to the left of it.

And because I've got at least 2 more stitchy gifts to make for Xmas, I've started one of those too -- for my son's lady friend, who likes to bake.  It's one of a trio called "The Kitchen Counter Series" from Hands On Designs.  This one is entitled, "Lick the Bowl".  Delightful!

Remember all the samples I described in my last post?  Well...live and learn.  None of them -- no, not one -- would work for this first piece.  A large part of that was due to time.  I discovered -- to my chagrin -- that, in order to make a piece of any size, most of those techniques would take far longer than the time allotted for this project.

Rethinking...and trying without success to create anything that bore any resemblance to any landscape I'd been able to make "BC" (Before COVID). So...I went with what I'd been doing, and what I learned from Katie Pasquini Masopust's practice of "Artful Log Cabins" -- the same sort of technique I used to convert one of my wall art pieces into a bed-sized art piece, commissioned by a dear friend in 2019.

Using the same sort of gridding technique, I've almost finished my first Art in the Park piece, with the working title "Meadow Impressions". 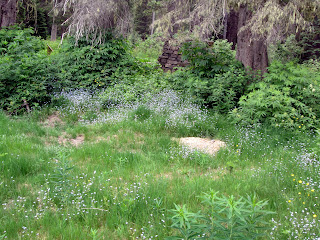 And now the "impression" in fabric -- on my design wall, still under construction: 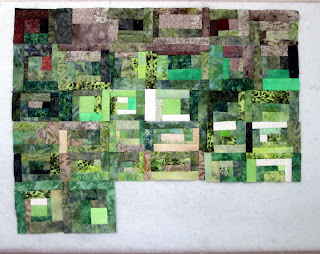 Another four blocks and the top should be ready to assemble.  Then I need to decide on the quilting process, and whether or not there'll be textural additions (hand stitch).  Time will tell!  Stay tuned!

Meanwhile, the theology classes continue to challenge -- and irritate -- me (the author of the text takes up a lot of space to say very little)...and our poor wee parish has suffered the loss of yet another member.  That's two in as many months -- neither from Covid.  Both men, both stalwart, helpful, faithful, dear souls, and both at the end of short, unexpected illnesses. With another stalwart dying earlier this year, and the Queen's death so recently, we're a rather mournful crowd at the moment.

The only way to manage is to pray, to put one foot in front of the other, and to do what one is guided to do next.  For tomorrow, that means writing a homily and preparing the Order of Service for Sunday.  On Monday, that means writing up 3 of the silly questions in the theology text and sending them off to the prof.  At the same time, in the next several days, it means praying for two dear friends who are facing surgery...and sorting out what will be needed to remember the dear man who's just died.

After that...one must look forward, and live out what is set in front of one.  Finishing one art piece and starting another.  Working at Christmas gifts, which is always delightful.  Looking forward to Canadian Thanksgiving (next weekend) when I travel to Edmonton to visit my daughter, help her put her garden to bed for winter, and perhaps see some of her lovely friends at a pot-luck.

Meanwhile, Gentle Readers, thank you for dropping by.  I leave you with my usual link to Nina-Marie's Off the Wall Friday -- she too is finishing and starting, in the way of the world.  I hope you are all well and safe -- remembering especially my friends and family in Atltantic Canada in the wake of Hurricane Fiona, and friends and acquaintances in Florida and up the US coast as Hurricane Ian travels by.  May we find strength in the comfort and help we give to each other whenever and wherever it's needed.

As Tiny Tim said, "God bless us, every one."

Hi Marg... a beautiful and BUSY ARTIST post that brings us all great joy - you are always so very busy and creating so many lovely gifts and thoughts for your friends... a blessing really!

Enjoy the fall and get out on that lovely garden bench when you can - brush off the leaves, gather a sweater and blanket and just stitch away!
Love ya,
Bethany