There's a lot goin' on 'round here.  Mother Nature hasn't been able to make up her mind about allowing us to have Spring this year, which my tulips, my budding trees, the returning birds and my schedule have found rather chaotic.

As if the outside world weren't chaotic enough! 😆

I've been fighting back attempting to stay calm with routines -- roughly reflected in the title of my April 1 post. Knit, quilt, stitch, repeat.  To that, when possible, I've added "walk".  It's helping -- somewhat!

As a result...I've managed to get a few things finished, a few started, a few under construction and a couple of new ideas.

In my last post you saw my finished blue-and-gold quilt for Ukrainian refugees.  It -- and three other lap/comfort quilts -- were delivered to the local Blankets of Love rep a couple of weeks ago.  Now I'm roaring ahead on "Hearts of Hope" -- Bonnie Hunter's contribution to Ukraine support.  All of the pattern parts are posted now, and I've seen some finishes online.  I'm not there yet -- but I'm getting close.  Though not a difficult pattern, it's rather labour intensive, but I've been working on it every-other-day or so, and have 4 rows completed, with the blocks of the fifth waiting to be sewn together, and those of the sixth under construction (there are 7 rows plus borders).

I have to say I've really enjoyed this pattern and will probably make it again with different colours -- or completely scrappy!

Aside from my little embroidery piece honouring Ukraine -- which now hangs outside my back door -- I've finished some other pieces, and am gearing up to start a couple of new ones.

This one -- "Crowning Glory" from The Victoria Sampler -- is now at my framers for a special mat to be cut.  I've asked her to mat it, then back it with foam core, so I can simply mount it on a stand once a year as an Easter Season Stitch. 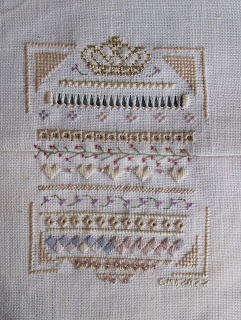 It's a pattern that I acquired a good 12 years ago; now it's available as a PDF.  I had some trouble with it (to put it mildly).  The fabric frayed tremendously in the midst of one of the pattern features...  Take a look at the pattern on the website, and see if you can figure out what I did differently.  😉😆

It's also at the frame shop. I want her to frame it as a companion piece for this Just Nan pattern I did in 2005 ("Summer Night"), that currently hangs in my bedroom.  The mat and frame styles have changed, of course, but she thinks she can get something close to this:

And speaking of finishes re: Just Nan designs -- I've finished the stitching for the first of a pair of pieces entitled "Marching Orders".  This first one is going to become a needlebook for one of my favourite "floss-tubers".  Here it is just out of the frame.  There's a red hat charm to be sewn on, but I may leave that till I'm close to a "Final Finish". 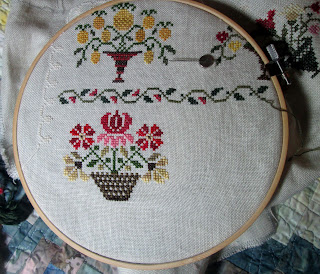 And here's a close-up 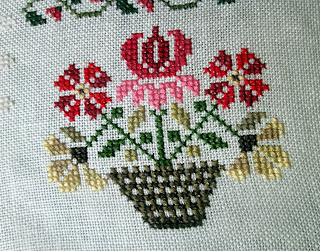 I played with the reds on this one, so it's a bit brighter than "called for" -- I just think it's delightful!  And the next installment comes out on Sunday!

I have three pieces under construction: "What Remains is Love" from Blackbird Designs, which is a memorial for my husband and is stitched only from time to time; "Stitcher's Prayer" from Kathy Barrick, a pattern I've had for ages (it was published in 2001!!); and a third on which I'm making great progress -- but won't show any links or photos, as it's a gift for one of my friends who occasionally reads this blog.  Sorry...

Of course, there are 'starts' in my future now: "Marching Orders" as a line sampler is top of mind, along with the May 'mini bouquet' from Jeannette.

In the sampler/cross-stitch world, apparently there's a group that celebrates stitching in the month of May with "Stitch Maynia".  There was a Facebook page...but it's evolved and I can't find it for 2022.  Nonetheless, the Floss Tube world is all a-buzz with this year's projects and plans.  The general idea is that you start something new every day during May!!  Whoa!

But wait -- you don't have to!  As with so much today, there are no hard-and-fast rules about that.  Just start one new thing, or one a week or one for Mother's Day and another for Victoria Day (or Memorial Day in the US) or...or...well, you get the idea.

So I'll have the two starts mentioned (which I'd have started anyway), and...I've a stack of options for another start.  I'm thinking of Mother's Day because of this red-stitch sampler:

I bought mine through my favourite LNS, Traditional Stitches, located on the west edge of Calgary.
It was the name that got to me: Ruth Gibb.  My maternal grandmother was Margaret Gibb, and she named my mother Margaret Ruth.  Mom always went by 'Ruth' -- and my DH and I named our daughter Gina Ruth (she uses 'Gina').  I think it only fitting that I do this as a "Mother's Day Start" then, eh?

Of course...that's lead to another 'rabbit hole' -- finding out more about the Gibb family, emmigrants from Barrow-in-Furness, England, in the late 1800s.  And seeing if I could find a Scottish sampler created by someone in my father's family, which originated in Kilsyth (Stirlingshire).  My GGGrandfather and his bride came to SW Quebec in 1826 to join his two half-brothers.  My Scots cousin (on Skye now) said he didn't know of any, and that may be true -- I'm not sure how many of the farmers' daughters went to school in those days (where many samplers were taught).

That said, I had the delightful honour of a Zoom chat with Nicola Parkman of Hands Across the Sea (HATS), and she's encouraged me to select some examples of Scottish samplers, including ones from Stirlingshire (there are some distinctive features in those), and design my own.  Needless to say, photos are being collected and ideas are percolating!! 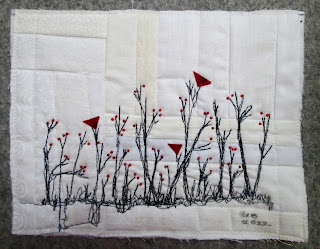 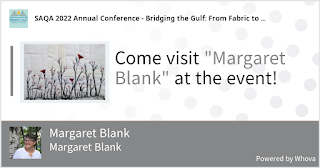 On the art quilt front, my little piece, "January Picnic" is up for bid at the SAQA Spotlight Auction, which opens today and runs online at HandBid, through May 7.  (Bidding opens at 3 p.m. Eastern/1 p.m. Mountain).  My piece is on "Table 1", which will be the first to close on that date (4 p.m. Eastern, 2 p.m. Mountain). Every piece starts at $20 USD.  Shipping is $30 USD for up to 5 pieces.  Each is matted and backed, so it will present beautifully when you receive it.

And...several pieces are in at the framer's, including my latest piece, faced and mounted on 16" x 12" stretched canvas:

It's actually rather "good" that my art-making has taken a back seat to knitting, stitching and charity quilting.  The pieces are stacking up at the frame shop due to supply issues including the acquisition of the particular mouldings used for my work -- that black 'floater' frame I like so much -- so I don't know how long the process will take.  As I'm showing in the shop's gallery, I do have some work on exhibit -- as it were -- but there'll be no local art show/sale again this year (I'd be there right now if there were!).  Thus my framer can take her time getting them framed -- and I can save up the $$ for when it's all finished!

As for new ideas...well, aside from designing a Scottish sampler (and maybe an English one too!), I've at least two art quilting 'experiments' brewing.  One is the quilting of an almost-all-white string/improv piece that I thought at first might be a background, but now think might stand on its own.  The other is some sort of improv work with a selection of "prairie greens" I've gathered over time.  It includes some sunprinting I've done, some hand-dyeing, and some lovely stretchy velvet bits (6" square) dyed by my friend arlee barr -- and which I've finally mounted on stabilizer so I can  use them! 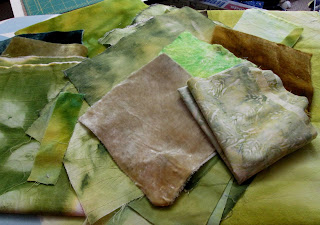 In addition to continuing my making, over the next while I'll be attending the SAQA Conference -- brought to us again online this year, from a team in Florida (where the in-person plans were cancelled due to...you know).  So while I'm 'travelling' to "St. Petersburg" via Zoom...I'll leave you with wishes for a great weekend, and a link to Nina-Marie's Off the Wall Friday.  Nina-Marie isn't there right now though; she's also travelling. Check out the link to learn where!

Your Ukrainian hearts are charming and surely will cheer up a refugee. I also admire your embroidery pieces...lovely

The supply chain shortages right now are interesting. There seems to be no way to predict what might be available. Hopefully it will get sorted out soon.
Enjoy your stitching.