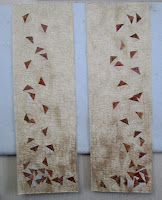 In my last post, I shared with you the last of my new artwork for 2021: a diptych entitled "Scattered I" and "II".  This week I finally completed hand-stitching the binding on that pair, and they're ready for hanging sleeves.
Since then, I've surprised myself -- and made two more!
"Why was this a surprise?" you might be thinking (or not!).  Well, as I mentioned in that very same post, like many most probably all of you, Gentle Readers, I'm finding it's a daily practice to Keep Things In Perspective.  As Kate Jackson of The Last Homely House suggests, in these pandemic times it's rather a good idea to "get out of one's head and into one's hands"; thus I'm making time and space to make something every day.
My copy of the Winter 2022 edition of Quilting Arts magazine arrived not long ago, and I made some time to go through it.  In there, I found Canadian textile artist, Anni Hunt's  second of a trio of articles.  The first -- in the Fall 2021 issue -- was about printing on fabric, which isn't something I do often.  This second one, though, was about collage.  This is a technique that I struggle with -- especially when it's practiced in a free-form sort of way.
Yes, much of my work involves some sort of "collage", in that I layer pieces of fabric into some sort of artistic coherence -- but that's not what I'm getting at here.  What Anni and so many other artists seem able to do with assorted materials has always challenged me.  I get so darned hung up on trying to "make it look like something" that I diddle around, fussing about where and how to lay down whatever it is I'm working with, whether fabric or paper or something of both.  The work might end up looking rather attractive, but even to my eyes it comes across as rather stiff and formal.  *In the photo, the flowered background is the paper on the wall on which the canvas is hung, not part of the artwork!
Still, Anni's article piqued my interest, so I thought I'd give it a go -- try to play for a change.  So...I dug out some batting, some light-weight backing, some neutral scraps of fabric and some tea bag papers.  And bonding powder, because I'd not "played" with it in ages, and was running low on fusible web.   After all, I was just making a background, for pity's sake -- just as she was suggesting in her article, "Fabric Collage: New Beginnings" (p. 96 in the magazine).
My base fabric was very light and a slightly irregular shape; I left it that way.  I layered it over some "franken-batting" (i.e. two pieces zig-zagged together to make a larger piece), and then sprinkled on the bonding powder, before applying a layer of fabrics and tea bag papers.  The powder was an adventure.  With our very dry air (humidifier or not), it was a challenge to keep it from getting everywhere but where I wanted it.  Still, I persisted!  Eventually I had all the layers together, and zig-zagged the scrappy collage:

Well now!  That wasn't so hard, was it?!
What next?  The part of me that likes "order" and prefers it to "look like something" was on the verge of an attack of acute anxiety.
Okay then!  Make something of it!
So I did.  First, I added "trees" from scraps of painted/printed fabric, using matte medium.  And I saw that "it was good" -- so I signed it! 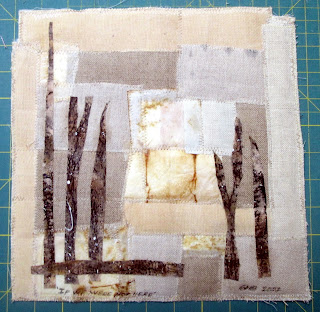 And then I mounted it on a 12" square stretched canvas, which I painted in an attempt at a dark brown -- having no brown paint on hand. (I can't remember the last time I wanted to use any brown paint!) 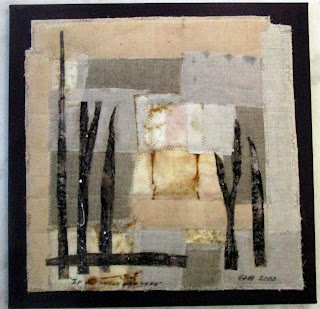 Eventually, it will be framed.  The title is "If We Were Not Here", after a line in a poem from Wendell Berry in his book A Small Porch (Counterpoint Press, Berkeley, CA, 2016 - Part VIII, "A Small Porch in the Woods") --  a Christmas gift this past year:

The pattern for keeping this place
we must take from the woods, if
the land is to thrive in our using.*
If we were not here, Nature
would give this land to trees...
*An Agricultural Testament, pp. 1-4
In the mood for more "play" I took out a good-sized piece of fabric that I'd thought at first I'd make into a whole cloth piece with free-form linear quilting.  It's more grey-browns and grey-greens than the photo shows, because the photo was taken with it sandwiched and quilted, and lying on my ironing board.
I'd decided to see if I could construct an old tree from some of the gazillions of dark brown "bonus triangles" I had from a former project -- ones I'd not turned into half-square triangles.  Below you see the beginnings of piling up the tiny scraps -- small triangles I'd cut up into even smaller ones: 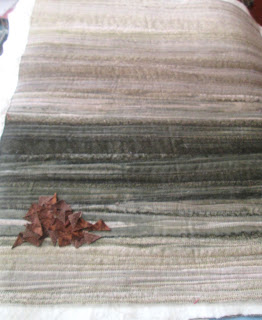 I liked the effect, but how to put these together?  I created the tree trunk, layered it with MistyFuse and fine grey tulle, and, beneath a pressing sheet, gave it a good press:

Aaaargh!  What a mess!  The photo shows only one corner of the piece, and the darned tulle hadn't merged into the background as I thought it would.  ICK!!  Now what?!
Well, I sliced the large piece in half (or thereabouts) and then I cut out the tree.  Yep.  Got out some fine-tipped applique scissors and cut every tiny nook and cranny,  Then I placed it on the remaining half of the quilted background -- pinned -- and stitched it down with a dark variegated thread (Superior King Tut #979 - "Obsidian"): 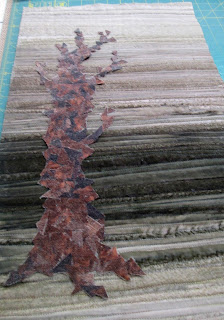 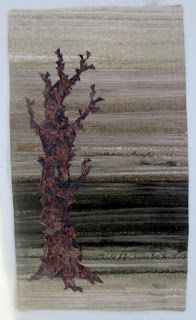 As for the cut-out scraps from the other half of the quilted piece, they've been saved for later use -- they'll make great hills and fields sometime in the future.
After all that "play", it was time for a break -- and I returned to 'piece peace, order and good government' (pun intended)...making several more wonky log cabin blocks from crumbs and strings (I'm closing in on 60 but need 90 for something of any size), making a few more pinwheel blocks from "bonus" HSTs, and finally finishing the assembly of the last rows of the "Easy Breezy" (a Bonnie Hunter leaders-and-enders pattern) piece, started long ago as a 'quilt-as-you-go'.  Those rows now have to be joined together.  There are 9 rows of 9 blocks, and I'm putting them together in pairs, thus:
I've not enough of the red print to do all 8 long sashes, so row #3 and row #6 will have solid red on the front, instead.  And all the sashing on the back is a solid royal blue that picks up on the blue in the print of the fabric.
Still with Bonnie, my 2021 "Rhododendron Trail" units are coming along -- for Clue #3 ---no! Clue #4* which (she warned us!) is rather labour-intensive...
*I discovered I'm farther ahead than I thought!  Here's what Clue #3 -- now finished --  looked like in process!

For a change of pace, I've also been stitching -- and have finished the first 'mini bouqet' in Jeannette Douglas' *free* 2022 informal stitch-along, which I mentioned briefly in my last post.  On 28-count linen, the design area is about 3" square; I'm using DMC threads for the most part -- with a few hand-dyes mixed in: 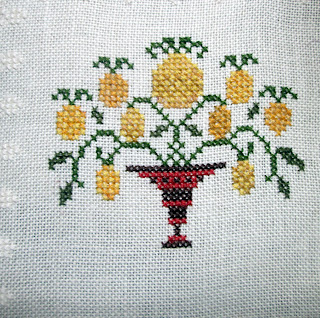 In my last post, I also mentioned another of Jeannette's designs, Mon Coeur, which I decided to start early -- as a "birthday start" in honour of my daughter, who turned 41 on the 13th of this month.  I'm just working on the border, which is being done in "Perlee Creme", a rather slinky, slippery cousin of perle cotton.  It's going to be very pretty, but it certainly requires concentration!
And of course, Gentle Readers, there's always knitting!
The baby socks are finished and mailed.  Here's the second pair, with a rolled cuff, which I'd not even started when I last wrote: 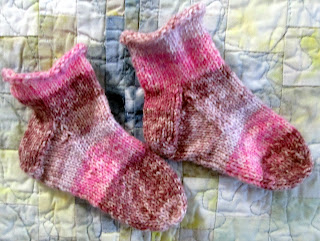 And my daughter received her two headbands in time for her birthday.  Yes, two.  The first one is in her chosen colour and pattern:

The "Heat Wave" yarn was give me by a friend last summer.  I'm trying not to work with 100% acrylic...but thought this was worth trying out.  It's soft and much nicer than any Red Heart worsted I've used before.  AND it's supposed to "warm up" in the outdoors -- even if it's cloudy.  My daughter was willing to try it out -- and this weekend will provide the perfect opportunity!  The Deep Freeze has moved east, so in our more moderate winter temps, she's planning some hiking photography out in the mountains...and will report back on the quality of the respective "ear warmers".  Stay tuned!
It wouldn't be January without all of this "Startitis" -- new artwork and stitching, and now knitting.  Yes, I'm working away on the body of my "Ranunculus" pullover, but I also started a cowl in an odd yarn from my stash -- "Icona" from  Bertagna Filati.  I'm using a Tin Can Knits pattern -- the "Simple Yet Effective Cowl" -- because it adapts to pretty much any weight of yarn.  There's not enough done to show you a photo, and it's knitting up rather stiffly (per the yarn's unusual construction) but I'm hoping it will soften up with washing later.
On that hopeful note, I'll leave you with wishes for a quiet, comfy, cozy, creative weekend -- and with a link to my friend Nina Marie's Off the Wall Friday.  TTFN... 😊
Posted by Margaret at 1:42 pm

You may be a jack of all trades, but you're master of several.

Hi <arg... I am so excited about all of your new stitch projects and celebrate your dynamic continuation with a bold and ever-busy creative lifestyle. I understand the peace of working when you are alone at home, and the quality of quiet days now that winter is here... the new collage and layered piece with the tree - amazing start on some new adventure... and you were determined to make both work for you! Hooray.

Love the knitted headbands - would you ever do a commission one for me? I have never learned to do cables, and that would be very warm as I hike the trails... I have one from years ago and it is starting to look a bit tired as I wear it almost every day.

Love the first two pieces that are shared at the strat of your post and can't wait to see the follow-up. Take good care, stay warm and keep an eye out for the beauty just outside your windows.
Waiting for the next post - your new stitching is encouraging me - especially the cross stitch...
Bethany xo

I see here a kindred spirit who enjoys trying her hand at a variety of stitching. I love the sort of improv you explore and that resulting tree is stunning. I wish I had more nerve?? to try something like that.It is all so creative and wonderful.