The title of this post is a quote from my friend Jenny Lyon, an artist who lives in California and travels far more than I think is safe during a Global Pandemic!  😉

But she's right.  She wrote that as a comment on a Facebook post I made recently, right after I'd learned that the Lacombe Art Show & Sale -- at which I've been Featured-Artist-in-Waiting since post-show 2019 -- was cancelled for the third year in a row.  This time it's only partially due to the uncertainty of the omicron variant of COVID-19, the infectiousness of which is hampered by our Very Conservative province's lower vaccination up-take, but it's also due to other factors at the City which I don't know much about and to which I'm not privvy.

I've had a couple of small Pity Parties as a result, but now...well, that's just no way to live and I'm moving on.

The Creativity is Marching On.

Heck!  It's been marching for a while now!  As month end approaches, I've done a tally, and I've finished seven new pieces this month of January alone!  I featured three of them in my last post.  Since then, I've produced these:

Yes...I'm continuing to play with "substrates" (aka 'backgrounds') and how I might use pieced and quilted backgrounds to create my work.  There's a "nearly all white" background being pieced right now for a 'soft' piece (i.e. larger and not on canvas)...more about that in the future.

I also took part in "Stitch Camp" for five days (January 17-21 inclusive) via TextileArtist.org.  That was inspiring...but not quite in the way the organizers intended -- at least, not for me.  I'm not a marker on fabric most of the time.  And I prefer machine stitch first...hand stitch as accents. Still...a little inspiration goes a long way, and since I've been exploring a) using up stuff to keep it out of the landfill; and b) substrates -- I made this:

I expect the framed ones will end up at my framer's gallery -- Curiosity Art & Framing in Red Deer -- and could be purchased there in person or online -- but...if any Gentle Reader is interested...send me a message via "margblank - at - xplornet - dot - ca".  (This doesn't apply to the SAQA Spotlight Auction piece, which will be available later...stay tuned.)

In other quilting...I continue to work on the 2022 Bonnie Hunter Mystery -- "Rhododendron Trail".  I'm plugging away at Clue #5 now, which takes Clue #3 units and adds to them.  I'm much farther along now than the photo below shows...and have moved into the second selection of pink fabric, having exhausted the first. 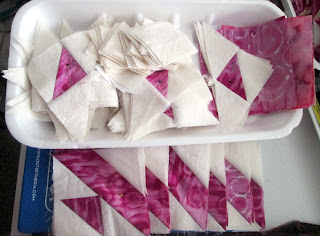 The full piece has been revealed - and it's very pretty; that said, I'm making the quilt at 3/4 the size, and forsee that the turquoise/aqua "sky" fabric in the original may be swapped out for something else as I get closer to the finished product.

I've now got almost 70 'wonky log cabin' blocks from strings and scraps, and over 2 dozen "Spare Squares" (a Lori Holt freebie) which will be converted to a lap quilt shortly.  Fabric scraps: the gift that keeps on giving!

In knitting... I finished my Ranunculus pullover (sorry; no 'selfies'); it fits (though I'm not sure about it's length) and will be a pretty addition to a warmer weather wardrobe.  That said, I've not caught the 'bug' that makes it addictive to some knitters.  I might make another but not in the next five minutes.  I've returned to knitting my Turtle Dove II tunic in a glorious teal, 'Haynes' Creek Heathers Aran' from Gathering Yarn.  It's a top-down pullover, and I'm nearing the end of the increases over the yoke -- soon to divide for the sleeves.

My daughter reported that the two headbands I made for her birthday kept her warm enough on a recent hiking trip to the Rockies (near Banff, Alberta).  The one made from the "special" acrylic -- Red Heart's "Heat Wave" -- was indeed cozy, but she couldn't tell if it was the yarn itself, or the fact that a) the pattern was thick cables; or b) it fit more closely than the headband made of "regular" yarn (an acrylic/wool blend).  So...whatever!  She liked them both, and for that I am grateful!  (I've a dear friend who wants one and so now that I know how well the yarn performs, I must get going on that for her too.)

I continue to embroider on other projects while waiting for Jeannette's February "mini bouquet" -- alas, no further photos to show.  Those will come...in time, along with some hand-stitch on a collage I started in the above-mentioned "Stitch Camp" -- though only very tenuously related to the activity taught at the camp!

February approaches, and with it, a forecast of colder weather and more snow.  I'm ready!  First, I have reading material.  This new tome arrived in the mail Friday...bought and paid for some months ago, from the Royal Alberta Museum in Edmonton, written by quilt historian and friend of all quilters, Lucie Heins: 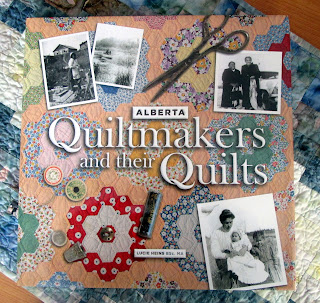 It's weighty; it's a true "coffee table book" -- so it will take some time to enjoy fully, to savour and digest the contents...but I commend it to my Alberta compatriots, to ALL Canadian quilters, and to others outside Canada who might be interested.  😊

I've a new art piece in the works, all that hand-stitch and knitting to do...a cozy home and a furry supervisor who ensures I get up each morning to feed her and keep to my routine.

And of course I've the inspiration from all of you, Gentle Readers, including those of you who share your work over at Nina-Marie's Off the Wall Friday...where I'm linking this post.

I leave you with wishes for a safe, cozy, creative week, safely sheltered from storm, sturm und drang...till next month, with love...