More Fun with Dye and Paint...and Other Things

We're not under "Heat Dome" any more (apparently) but this has been the hottest summer I can remember while living Out West.  I grew up in SW Quebec, where summers were hot and humid; out here, since my first summer in 1977?  Not so much!

I'll admit that it has made the "Summer of Slow and Quiet" easier to do!  No one can move quickly in this heat, and blessedly none of my neighbours have conspired to be noisy.   No late, tipsy evenings around a fire pit, for example.  It's just been too darned hot!

Early mornings are given over to knitting (even with cotton it's too hot later in the day), and taking a good walk -- unless I'm mowing the grass.

I began some weeks ago to mow 'selectively' on the east side of my property, as I'm trying to encourage clovers (red, Dutch white and sweet white), alfalfa and some wildflowers to propate.  Here's most of the current selection:


I also have a few daisies here and there, and have transplanted in some Brown/Black-eyed Susans and catnip.  So far the catnip has been completely ignored -- not only by Miss Pookie but also by any and all cats in the neighbourhood.  I suppose that for this I should be thankful! 😉

There has been harvesting too --

And my flowers continue to suprise and delight.  Years ago a former neighbour gave me some agapanthus transplants.  To date, they've always given orange coloured blossoms.  This year, too -- but then they also offered these...

Then there's the bush I fondly call my "Old Lady Rose", given me by that same former neighbour (they'd been planted by his mother decades ago)...She's blossoming in bunches this year, despite the heat and drought! 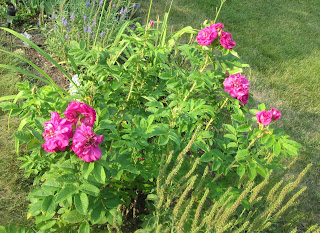 Getting away from the gardening...

I've been doing some painting.  Some of this has been 'work' -- my kitchen cupboard doors and drawers -- and some, play.  I'll spare you the B, S & T (Blood, sweat & tears) of the former and share the latter, which I'm sure you'll enjoy more!

Between January and March this year I took part (loosely) in an online class by the talented Susan Purney Mark.  I admire her work and have been blessed to take a short workshop in person with her at a SAQA Regional retreat (Western Canada) a few years back.  This class was titled "Cloth to Codex" -- and it turned out to be more about mark-making and book/scroll assembly than interests me, but I continued to observe, and to mark time till I had the space in which to "get messy" (out on my back stoop) and play with some of what she taught us.

I was most intrigued by the fabric painting and "dipping" processes, and have experimented with some of these.

I began with some 'dip-dyeing' of assorted fabric -- mostly linen embroidery scraps, but also a piece of closely-woven cotton...

I also played with painting fabrics.  I did so by placing them on pieces of 140-lb water-colour paper, so that the paint would go through:

I'm not sure what I'm going to do with any of that fabric yet -- but pieces from two of the watercolour paper underlays have been turned into these...

They make me happy! 😊

While I was looking for fabric to paint (above), I came across a scrap of fabric that had 'blotches' of colour on it.  I think it was simply a 'blotter' from an earlier fabric painting episode, now long gone from memory.  That said, it reminded me of a butterfly on flowers, so I sandwiched it up, stitched it and here it is!

I eventually found the fabric for which I was looking, and -- inspired by a painting of an autumn scene done by an artist in one of my FB groups -- I created a single piece that, in the end, looked better sliced in half and stitched.  Today I mounted the pieces -- each is 4" W x 8 1/2" L -- mounted side by side on painted stretched canvas, and eventually I'll take it to be framed:

Yes, there has been knitting, and some hand-stitch...but that will have to wait until another day.  This is enough for now.  I have some charity quilting to do and have three (count 'em!) library books to enjoy, which will carry me through the next few days, all of which are expected to be extremely hot.
Till next time, friends, may you be well, be safe, and be creative!  I'm linking this up with Nina-Marie's Off the Wall Friday and wishing you blessings for the rest of the weekend.  😊