The last few days have been cold and damp-ish, with deep wind chill factors, keeping me from enjoying a good walk outside.  Those walk-at-home videos get me moving, but they don't include fresh air, the crunch of gravel or snow underfoot, and chickadees at the bird feeder.

I need to force myself outdoors when the weather's like this, but I'm finding it harder to do the older I get.  I spend time in my sewdio, and I knit.  I listen to music, and to the Dean of Canterbury Cathedral reading The Wind in the Willows, but it's not enough.  In this COVID time, though I've been trying to manage my news intake, there's added anxiety hovering about.  In my dreams, mainly unremembered, the people are wearing masks. 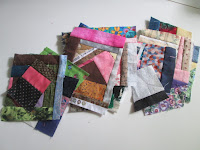 You may recall that in the first few months of this time, I couldn't make an original piece of work.  My first one showed up, at last, in June.  Then all of the piecing I'd been doing, and the playing with crumbs, resulted in two more pieces...

I continued to make crumb blocks with the idea of making a set built to 8" square, and assembling them into a top, probably with sashing, to give away.

Then I spilled my coffee.

It was on and under the cutting mat on my cutting table, dripped a bit onto a basket of yardage (from my "inheritance") that was sitting below the table, and was absorbed, at least in part, by a stack of these squares.

With less than charitable language, I cleaned up the mess -- all the while thankful that I drink my coffee black, so there was no sticky sugar or milk to worry about, and thankful, too, for that box of yardage, because nothing landed on the carpet!

I bundled the yardage into the washer, along with some other clothes that needed washing, and added the 8" blocks, stuffed into a net lingerie bag. 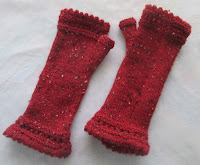 All the fabric came out rumpled, of course, but otherwise none the worse for wear.

I gave the blocks a quick iron and put them to the side again, resuming work on the other projects at hand -- the mystery quilts and the Christmas knitting etc.

There were 17 of them.  I took four and assembled them into a four-patch.  I did the same with another four, and another, and another.  I was about to put all four four-patches (!) together, when during pressing, I noticed the back of one of them.  The washing had resulted in significant fraying of many of the fabrics -- not really surprising, as these were crumbs and scraps, small enough to fray easily.

I liked the look.  It expressed how I'd been feeling lately -- especially as the days are getting ever shorter here in the Northern Hemisphere, and ever colder, and as our Province's mandated health measures took a deep dive into increased isolation as of the end of last week.

Frayed.  As went the fabric, so have my emotions.  Grief is a very close companion, and my coping skills are being severely tested.

On Thursday afternoon I listened to the Primate of the Anglican Church of Canada, Archbishop Linda Nicholls, in conversation via video with Shawn Branch of the Diocese of Fredericton.  Somewhere in there, as she was talking about coping with these COVID-time experiences and feelings, she said something like, "Watch out for the 'strong ones'; they need support too."

Well.  I come from a long line of folks brought up to be "strong" in the face of adversity -- and they lived through much: the Great War (my father was born in 1904; my step-father, in 1914, and my mother in 1916); the Great Depression, WWII, racial and linguistic and other unrest in the nineteen sixties.

Family deaths, miscarriages, financial worries.  They were of the "Keep Calm and Carry On" generations: practical, nose-to-grindstone, "mustn't grumble" people.

And for a very long time, I was one of their ranks.  In the last years of my husband's life, my strong demeanour was beginning to crack, and immediately after his death, I was a mess for some years -- but now, 14 years on, I thought I was getting stronger.  Regaining my intestinal fortitude.  Being strong for friends and neighbours and my kids during this time of challenge.

But...yesterday, as I looked at those blocks, I had to admit that I wasn't as strong as I might appear.  So I put them together to show the forces wrestling within me.  There's the Strong, Competent, Can-do Person who feels good, stays fit, shovels her own snow, cleans her own eavestroughs, makes lists and crosses them off, makes do and mends, puts forth her creativity and enjoys making gifts for others out of fabric and yarn.

Then there's the Frayed, Grief-haunted Soul who gets achey and tires easily, hates fighting the wind chill to take a walk outdoors, is easily irritated and short with others -- and knocks  her coffee cup over on whatever flat surface it's resting.

The latest in my COVID & Chaos series:


It won't be quilted.  It may or may not end up with a sleeve -- or sleeves -- as I want it to hang so that both sides can be seen.  I may use clips, or add tabs; I'm undecided as yet.

Today, I'm allowing my frayed edges to breathe a bit.  I'm determined to walk to the Post Office, if not farther, and to get back into the sewdio.  A dear friend and his wife have just become grandparents for the second time -- and it's a girl!  A baby sister for a big brother.  Because her Baba knits, I'll make a tummy time blanket.  Baby is only 12 weeks old right now, so there's a bit of time to do so.  "What colours?" I enquired..."Oh", her Baba replied promptly, "She's a pink girl!"  I have just the right fabric -- in cotton -- from the "inherited" stash.  I'm on it.

It's just the tonic to enable me to Keep Calm and Carry On.

And because I still can, I'm linking this post -- as I did the last one -- to Nina Marie's Off the Wall Friday. -- and to WIP Wednesday for Dec. 16, over at the Needle and Thread Network.

Til next we 'meet', may you be well, stay safe...and do what you need to do to keep from fraying at your edges.

My four year old grandson has recently greeting people with the phrase "Have a day!". This seems to be such an appropriate greeting for these times.

So we no longer classify days as good or bad. We just "have a day!".

Beautiful quilt, I imagine it with light spilling through, dark shadowed seams, and frayed edges glowing like halo's.
And those covid dreams--last night I tried to buy icecream, but then there was a line-up so I left down a stairwell, but the line-up crowded after me, none of them wearing masks...