That's the start of The Garden Song, which is a lovely ditty I remember from my children's growing up.

I'm a rather casual gardener, with distinct likes (blowsy, hardy shrub roses; peonies; wild flowers;  pots of geraniums and trailing lobelia; a few veggies in the mix) and dislikes (weeds, mainly, and rampant runners like yarrow and certain daisies).  I love my yard and working on stitching in my "Outdoor Studio".

Similarly, I'm a rather casual quilter.  I have distinct likes (piecing, mystery quilts, blocks-of-the-month, scrappy quilts) and dislikes (most applique, using templates, making quilts in columns rather than rows.)

I don't do "fussy"...I don't worry about whether or not my points match -- at least not too much.  I try to cut straight, and most of the time I succeed.  Whatever magic my Scrap Queen favourite -- Bonnie Hunter -- works with her patterns, when I make them, they look like a million bucks!  This gives me a thrill!

During these COVID-19 months, my motivation to create original work has dwindled.  I like to know that what I'm making has a chance of being seen and taken to a new home -- not just online but in person.  I don't have an online shop; those who want to purchase my work can contact me, yes, but I don't "do" Etsy or any other sort of permanent presence.

Instead, those of you who follow this blog know I've been spending a lot of time doing "OPI" (Other People's Instructions).  And though there may be a public art project in my future -- I have a meeting set for next week -- I'm continuing with utilitarian quilting, mainly for charity.

I'm almost finished the "Turning 40" quilt for my daughter, which I showed off in my last post (scroll down).  I've made it long enough and have added a row column (one of two) to one side to make it wide enough.  The second column (for the other side of the piece) is currently Under Construction. (Stay tuned!)

Here are the projects so far. 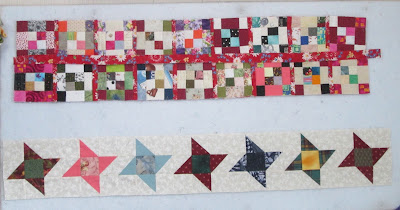 Up top you'll see two rows of "Easy Breezy" blocks, quilted and joined by sashing that needs to be sewn down on the back (between blocks).  There is a line of sashing fabric 'auditioned' between the two rows.  It's all very colourful and scrappy!
Below that is the first row of the CQA quilt-along -- a row of  'Friendship Star' blocks.  I dug up some background fabric from my "inheritance" and will use it for as long as it lasts.  The other pieces are from 2 1/2-inch and 3-inch blocks I'm using from Bonnie's "Scrap Users System" -- meaning that some time back I'd already cut and saved them from remnants of other projects.
"Inch by inch, row by row..."
And piece by piece...
So there you have it: where I am this week.
I need to make something useful -- something with a purpose.
Sometimes that "something" is "artful" but it's not "art for the wall".
And while I may be known more for the latter, right now, COVID-19 demands more of the former.  Any small-ish pieces that are baby/car seat/crib-sized/lap-sized will be done up and given away.  The rest?  The possible public commission? Well...we'll just have to see, won't we?
"Inch by inch, row by row..."

Linking this to Canada's WIP Wednesday from The Needle and Thread Network...and wishing you a warm, safe, healthy rest of the week!  😊

You consistently amaze and delight, Marg... always busy, following your dreams, and wanting to create magical gifts for others. You are a very special friend here and in person.
Hugs
bethany

I am not overly fond of mystery quilts or samplers but I do like row by row and strippy quilts. Keep up the good work!!!

Great use of scraps!!! Beautiful quilt story. Thanks for sharing your current quilt life.