This, That and the Other

Well now.  The fact that just over two weeks have disappeared since my last post has caught me up short.  With up-dates every day about the state of the world as it tries to cope with the COVID-19 virus, one day seems to run into another, and what was only a weeks ago seems either as if it were only yesterday -- or as if it were weeks or months ago -- depending on the timing.

It's rather like living in a state of suspended animation.  There's dawn and dusk; morning, afternoon and evening; wakefulness and sleep.  The time gets filled -- sometimes quite productively -- and the hours pass, one day melting into another.  It's a good thing I have hard-copy calendars as well as my computer to remind me of the day, date and time!

It seems I've been in closer touch with friends and family than ever before.  Everyone is checking on those they care about far more frequently -- or so it seems -- and while that is a Very Good Thing, it also is a bit...overwhelming.  That's not a very good description; it doesn't really identify what I'm getting at -- but if you are the least but introverted, perhaps you know what I mean.


March 19 through 21 I was involved with the adventure that was the SAQA Virtual Conference.  And what an adventure it was!  I've never spent as much time in front of a screen as I did during those days.
It was exhilarating, informative, inspiring -- and exhausting!

I had to give myself permission to tune out and go for walks on Friday and Saturday, because I noticed wierd things happening to my body -- tension through my shoulders and neck, and a bit of elevation in my blood pressure.  The release of that tension as I moved out in the fresh air on a long, empty country road leading out of town -- I can't adequately describe that either.  Suffice to say it did wonders!

While I was watching the conference, I was knitting -- focusing on 'growing' the Darlena shawl I'd started last fall and set aside for a few months.  I managed to finish all but the last five inches.  What you see below is the top garter stitch section (speckled yarn) and about 1/2 the centre lacy section.  That means that during the conference I managed to knit the rest of the lacy section -- a depth of 8 inches in total -- and to move into the final section, which is also garter stitch.  The piece gets larger with every right side row, as 4 stitches are added on each time, so you can imagine how wide it will be when I finish 5 more inches of garter stitch!

A few days before the conference I finished the "Bonjour/Hi" cowl which I absolutely love!  It was easy to knit, fits beautifully and is very cozy!  And yes...it sits right down over my shoulders.

I mentioned in that last post that the cowl is designed for two fine yarns to be held together.  Though the Berocco I chose was a brown/blue sort of mix, and the JaggerSpun was a deep wine colour, I think the resulting fabric is beautiful.  The photo doesn't do it justice: 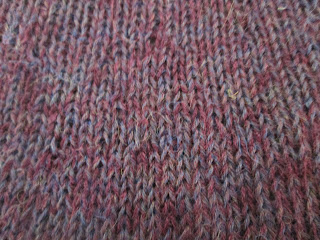 The day after the marathon (aka the Virtual Conference), I plunged into an online "Quarantine Quilt-Along" produced by Gudrun of GE Designs.  I stumbled over this online somehow, and realized it was just the thing to clear my head and clear some stash at the same time!

A few years ago I'd made a Magic Tiles quilt using "Red Hatter" fabric, for a friend of mine who's a "Red Hatter".  I had all sorts of the fabric left over, so I dug it out and have managed to make a throw-sized quilt top (50" x 62") plus a pieced back -- and I still have fabric enough for binding and some to spare!  I'm aiming to quilt it myself -- IF I can get my hands on enough batting.  My art pieces are generally small, and I rarely buy more than a craft-sized package of Quilter's Dream.  I've sent an e-mail to one LQS in the hopes she can help me -- with a pay-over-the-phone and a pick-up at the door of her shop, which is "open for business" but only by pick-up or delivery.  We'll see...

The pattern is "Elvira" and was available for free only during last weekend.  It's relatively simple and the blocks are large, so the size I chose took up a fair bit of my fabric:

To make the backing wide enough, I echoed some of the blocks and inserted them.  This is what Karen of Just Get It Done Quilts refers to as an "after-quilt" -- though the ones she makes are far more elegant! 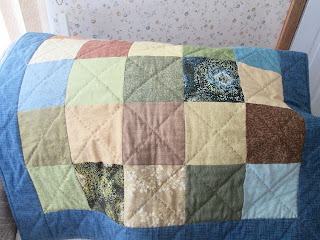 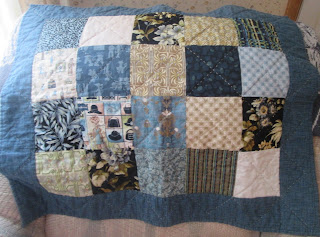 I know they look alike, but in fact, if you look closely you'll see that the only similarities are the backing and borders.  Both key in around blues, but one has more greens and browns.  Both -- before borders -- were created as a colour study in a Craftsy class I took a few years ago. 😊

Remember the socks I'd just started for the Socks From Stash March Challenge?   They're finished now...

And here's a close-up of the wee flower pattern... 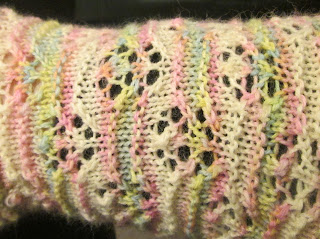 The theme for April is "Well-loved Pattern" -- which means participants need to pick a pattern that has been made more than 500 times.  I've decided on another from Caoua Coffee, in this very old stash yarn. 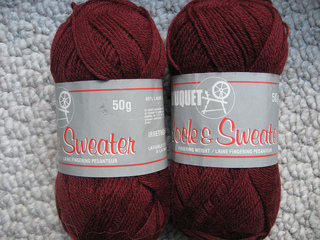 In quilting: assembling the blocks from Bonnie Hunter's last mystery quilt -- "Frolic!" -- and checking out her new project -- a "sew in place" quilt-along that starts Monday.  If you're inerested, you can find more info HERE.  I've just had a peek there myself and have no idea if I have any fabric that will work, but it's to be a medallion-style project, which means you can alter the size easily -- just add fewer borders!   If in the end I don't have enough of anything to play along, I'll just work on "Frolic!" and my knitting -- and maybe a 12" x 12" piece for the SAQA Benefit Auction.  It's all good.

In knitting: besides the aforementioned April SFS Challenge and the aforementioned Darlena shawl, I have yet another pair of socks on the go.  This was a pair I abandoned a while back and when I last stumbled over it, I was part-way down the leg of the second sock!  As of yesterday, I finished the heel and I'm now making my way down the foot, so they'll be finished in a day or two.  Maybe earlier!


And the "startitis" I was suffering in January has resurfaced, now that I'm spending even more time at home than usual...so when the good folks at Shetland Wool Week sent along the SWW 2020 hat pattern, I had a look -- and fell in love!  I've collected these hat patterns for several years now but this is the first one I think I'm actually going to make.  I've even auditioned the yarn for the colourway I want.  There are four on offer.  I could buy a kit, but I decided to shop my stash instead, and came up with this for something close to Colourway #3:

More about that project after I've acually cast on, okay?

I'll close this missive with a photo of "Green Pot", which was delivered by my framer on Friday.  It's now nestled in plenty of packing material inside a sturdy box, and will be on its way to its new home on Ontario on Monday...

I'm linking this (late as usual!) to Nina Marie's Off the Wall Friday, and sending you all, Gentle Readers, a hope and a prayer that you are well, keeping calm and creative, taking care of yourself as well as those you love, and remembering that we're One World, and we're all in this together.

You have been busy as we all have, I think. My energy is a frenetic. I go and then collapse. I wish I could have taken in the conference. There must have been lots of info and inspiration. I like alll your knitting projects especially the hummingbird socks and the shawl you made at the conference. And I think the Elvira pattern would make a nice charity quilt.

I am not sure what is happening with days/dates either. I found myself a day ahead in my planner for goodness sakes. As another introvert I am happy to be puttering at home but then all these 'free' classes and come alongs inundated my computer. Darn, made myself some stress with all I agreed too! The weather is smelling/feeling lovely but DD#1 up in Grande Prairie has sent a warning and the weatherman says something is coming in from the south. Looks like more inside days for sure. One day at a time no matter the snafoos with time and this, too, shall pass!

Margaret, I am also losing track of which day it is. I don't mind being in a "stay at home" mode. I have LOTS that needs doing. I am finding my quilting creativity waning. I can't seem to focus. So I am knitting. Am in awe of your shawl and blown away by the pattern of the socks. So gorgeous. Look for an email in the morning. Stay safe and healthy.