What was That About Spring? 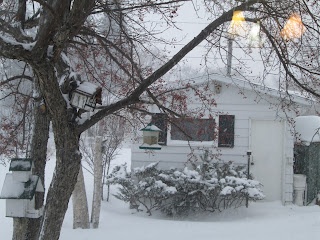 The above photo isn't from today -- or even this year (the tall birch stump beside the garage in the background is gone now) -- but it might as well be!  As forecast, the snow began early this a.m. and is ongoing.  It paused long enough -- well, lightened up long enough -- for my neighbour to satisfy his urge to clear it from his deck and some of his walkways, with his big snow-blower (in fact, he and his wife are still out there as I type!) -- but it's full on snowing again now and isn't destined to stop for another two or three hours.  And it's blowing.

A fellow with a sidewalk sized vehicle with a blade on the front has been by at least three times, ostensibly clearing the public sidewalk in front of our houses, but all that's happened is that it's filled up again.

What's a gal with a girly snowblower and an aversion to blowing snow supposed to do?  Stay inside and create, of course!

Let me begin with what I've worked on up to today...

Aside from knitting on my Millie sweater, in which I'm making my way down the body to the point where I can begin the finishing (3" - 4" deep) ribbing, I spent last weekend working with the "mystery materials" I showed you in my last post:


By Monday I was ready to rest my brain a bit, so I took out several small 'tops' I'd created in some colour studies in a Craftsy class a few years ago.  I'd put borders on them a few months ago, figuring I'd make table toppers for the Bazaar at our church last November.  Well, that didn't happen.  But...they are coming to life now as little cuddle blankets or car seat blankets or whatever for a new moms-and-babes program in Lacombe.  I decided it would be enjoyable to quilt them by hand, using a 'big stitch' (1/8" or a bit larger) and #12 perle cotton.

There are four in all, measuring up at about 29" x 30" or 30" square.  The first one is finished.  The blue border has more green in it -- but I couldn't get it to show on camera.  That said, it suits the blues in the squares.

The second one has been quilted, and I'm ready to sew on the binding on two of the sides.  I do what I've heard referred to as an "Amish binding" -- straight of grain; first two sides sewn edge to edge, then hemmed to the back; next, the second two are cut a bit longer so that when you hem them down on the back, the ends are folded in for a neat finish.  I'm not sure it's Amish (I can't find proof) but it works for me.  I find mitred corners clumsy to do and this method is less bulky in the corners than sewing all the bindings on a the same time and then trying to fold in the corners (which is what I used to do).


Today...well I was in the mood for Something Completely Different.

One of my favourite video podcasts on YouTube is Kate's Last Homely House.  Kate is a knitter, spinner, quilter, potter and gardener who lives in a "cottage" on a farmstead in Northumberland, UK.  She's a few years younger than I, with grown children, four cats, a goose and several hens.  Something about her strikes such a chord in me...and I love to hear her "witter on", as she calls it.  She sometimes does tutorials, and one of them really caught my attention several months ago (maybe even a year).  For those of you who want the whole thing for what I'm about to share, click HERE.

Now, those of you who know me, know that I'm not particularly partial to paper arts -- even though I've altered one book and created an artist's sketchbook/journal or two.

But that said, I absolutely love stationery and fine note paper and cards.  I don't care to make them, but I enjoy receiving them, and using good stationery for real hand-written correspondence.  Well, then.  Kate shared her idea for creating a sort of album in which to store favourite cards one had received.  It uses cardboard -- best from recycled cereal boxes -- decorative paper, glue and string or ribbon or even elastic to hold the cards in place in the album covers.


The card with the two kitties was sent me by my friend Maggi Birchenough of the U.K., whom I met when we were both SAQA Reps at the Portland conference in 2015.  She died a bit more than a year later, but in that time we became fast friends.  I miss her still. 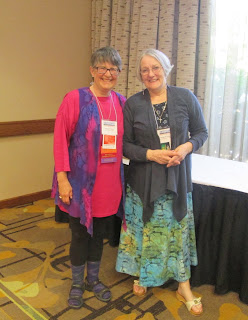 I leave you now, Gentle Readers, to figure out what to make for my supper...and to resume knitting on that Millie!  I want to wear it at the SAQA Conference in Toronto in a few weeks, and it's not going to finish itself!

Linking this to Nina Marie's Off the Wall Friday -- and wishing you a cozy rest of the weekend!  (Think of me tomorrow, when the storm has passed and I'm shovelling out! 😉)
Posted by Margaret at 4:03 pm