The weather's softened up around here, the days are getting just a teensy bit longer, and I'm getting into my new groove, working at home and only at home.  That first week after my last post was indeed a BLUE one, but I am on the other side of that now...at least, where my little corner of the world is concerned.

I've made new work, and have more in process!  I've shared a bit of this with my colleagues on the FB page for SAQA - 100 Days -- but truth be told, I'm not very good at make-one-thing-a-day-every-day-for-X-days.  As I wrote in this post, I warned the group from the get-go that I was better at process and wouldn't post every day; blessedly, the moderators don't have a problem with that.

So...if you're one of the members of that group and have seen what I'm about to share here, it's okay if you wander off and find something else to do!  😉

Well, I finished that single sock.  And single it is likely to remain for some time.  The process -- the complexity, the density of the pattern and the results (small and a bit stiff) brought me to the brink of Serious Second Sock Syndrome!  I had to pull back, and bow out of the "Socks from Stash" February Challenge to prevent SSSS.  I apologized to the group, explained my rationale, and posted this photo of said lone lovely little sock: 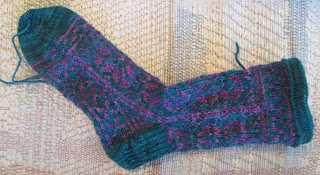 It sports a 7 1/2" foot (heel to toe), a 7 1/2" leg (cuff to bottom of heel) and is only about 6" around.  It certainly won't fit me -- and I know of no one else it would fit either!  If the yarn weren't so intricately interwoven due to the nature of the colour work, I'd rip it out and do something else with it.  Sigh.  I made the smaller of the two sizes (64 sts) and the shortest toe motif, using 2.25 mm needles as required by the pattern.  My preference would have been 72 sts on 2.5 mm but...making this from stash yarn, and only partial amounts at that, I didn't want to risk running out.  So...there it sits.  One of these days I'll get back to it but...not now.  If I do the March Challenge, I'll be sure to select a simpler pattern!

My "recovery" knitting is a simple pullover -- no photos to show you yet, but I can tell you the pattern is "Millie" from Nice and Knit, and I am loving every blessed simple stitch!  It's knit top-down, and is designed to create a loose-fitting, flowy body with 3/4 sleeves.  I'm using Berroco Boboli Lace in a colour-way I adore even though it's not my usual palate, and I'm hoping to finish it to wear at the SAQA Conference in Toronto next month.

I've a very good chance of that, because I've finished the increases for the body and, having separated out the stitches for the sleeves, am merrily making my way down the rest of the body to the waist.

When you see the Sweet Young Thing modelling the sweater on its pattern page, you might roll your eyes and wonder why on earth a gal in her mid-sixties (like me) would select it -- but it's because I was introduced to it by the mid-life women of The Knot House Podcast, and it looks terrific on an older woman.  And...there's a gaggle of older gals who've made it and look well in it, so I am trusting I'll feel the same about mine!

Getting back into the sewdio, I finished "On the Edge of Mirror", which as turned out to be the first in a series of three pieces based on photos taken on one of my winter walks.  It's now been framed, but here's what it looked like before framing:

I started a second in this little series, too...but on Monday I woke with a compulsion to paint a canvas.  Say what?  Yep.  "Paint a canvas!" said my "Muse" emphatically.  Not simply a sky below which I could apply a quilted-and-stitched foreground.  Not a canvas on which I could mount a smaller piece, keying in with the canvas itself.  No.  Paint a canvas.  And not a particularly small one, either: one of the largest ones I have in inventory: 16" x 20"! 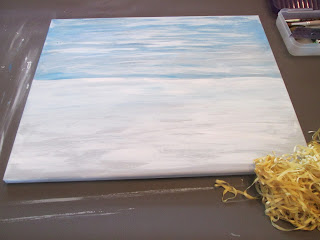 The pile of stuff you see in the lower right corner is silk ribbon, which I considered using as lines of grass showing through the snow, as in the inspirational photo below -- but in the end I opted for something else. 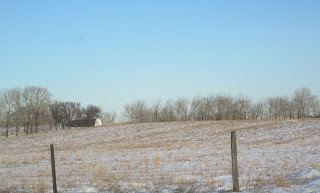 I knew I wanted to stitch those trees along the horizon -- and that I didn't want to remove the painted canvas from the stretcher bars -- so I began by drawing the trees in on the back side of the canvas (look carefully; I used pencil!):

Manipulating it under my sewing machine foot was a challenge -- I had to remove the foot and the needle -- so I've determined I won't try that again!  I'll detach the canvas first.

And of course I couldn't stitch where the stretcher bars were, so those bits of trees I drew in with Pitt Pen, and accented later with paint.  Below, you'll see that stitching and the painted accents...plus the barn, made of fabric fused to the surface, as are the two fence posts.  The field lines along the horizon and dropping down into the foreground are all pencil roving from the wheel of it (a "Rainbow Roll" from NORO Yarns), which I needle-felted onto the canvas, adding a touch of mat gel medium for extra security at the tips. 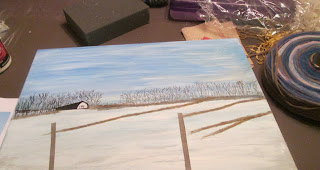 I added the barbed wire and some tiny grasses poking throught the snow, using Pitt pen and paint:


It was at this pont that I began to fuss about it...it wasn't quite finished.  There wasn't enough weight in the foreground (above) so I added more grasses:

There was one more tweak I added before taking it to be framed -- but it's not shown above.  Can you figure out what it is?  Leave a comment...and I'll let you know!  😊

The compulsion to paint fulfilled, I went back to the second in the series, and finished it; on Wednesday, both went to the framer.


I based it on this photo: 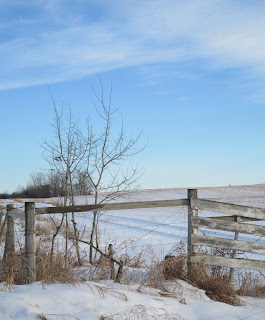 I set it up like this, with a hand-dye for the sky and commercial cotton for the foreground.
I fused both to a light backing. Before I began to stitch, I drew in the trees on the horizon,
using a fine-tipped Pitt pen in the 'sepia' colour-way. 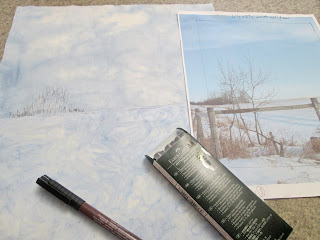 After stitching the trees and some grasses on the horizon, I added thread painting
to show the grasses in the field, before superimposing the tree trunks and fence posts. 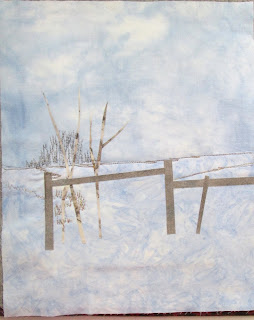 And here it is, finished, with all the stitching details added, and
wrapped around stretched canvas:


Next up: another 9" x 12", wrapped around stretched canvas...using self-dyed silk (a scarf I dyed with a light dip in a friend's indigo vat a few years ago, knowing I'd never wear it) and a recycled cotton pillowcase, given me by my daughter because it had a bleach stain on it.  My solution? Over-dye it, of course! 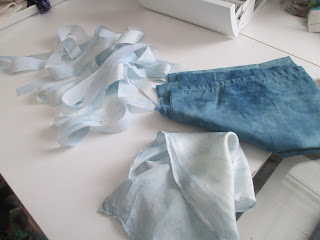 Stay tuned for what transpires!

Yes, I'm going to leave you hanging there...till next time.
Meanwhile, I'm linking to Nina Marie's Off the Wall Friday,
and I wish you a wonderful rest of the weekend!
Posted by Margaret at 11:57 am

Email ThisBlogThis!Share to TwitterShare to FacebookShare to Pinterest
Labels: Off the Wall Friday, On the Edge of Mirror, SFS Feb 2020, working in series

I love all of the winter scenes. I’ve never tried mounting any of my pieces although I’ve occasionally used a canvas substrate, wiry thinks brightening up now one feels like doing things. I’m looking forward to the time change in a couple weeks.

I don't know much about knitting except that som2 yarn looks scrumptious.
Your scenes are so amazing and I adore fences so these just make me sigh. Great work and I guess I'll have to just wait for your revelation.

I'm guessing you put a bird on it to finish?! Love your series, very evocative and calm.

Your landscapes are awesome.I LOVE them.