There seems to be a great deal going on at the moment (and I'm not speaking of U.S. and Canada's political scenes! 😉)

First, earlier this week I got the call that the Wall-to-Bed quilt was quilted.  I picked it up Wednesday, made the bindings and sewed on the long-side ones that day.  On Thursday, at The Shop, I did the hand-sewing of those bindings.  Thursday night I applied the short side (top and bottom) bindings; Friday I did the hand-sewing -- again at The Shop because I was there on my own, holding down the fort, as the owner and the other clerk were down at Spruce Meadows Equiplex, south of Calgary, at the second of the two "CreativFestival" shows in this province every September.

The washing and drying are finished now but...sorry -- no photos.  Trust me; it crinkled up in the most lovely way, and NONE OF THE COLOURS RAN! Hurray!! 😄 It will be in the mail to my client tomorrow!!

In addition, I now have a stack of 36 quilted string blocks (10" each before sashing) to assemble into the first of three quilts for the soon-to-arrive Syrian refugee family (no date yet!).   I'm torn between making the sashing so I can assemble these into a quilt, and starting the second of the quilts - another string quilt-as-you-go but with 8" blocks (before sashing).  It will be a quilt for a girl  this time -- around 9 years old.  The backing has red in it and so has been washed in Retayne -- just being cautious, you know! 😉

And then there's that Call to Entry that I've been thinking about.  Still no samples.  Not yet.  Is that a bad thing?

Wednesday evening I get to go to the "Behind the Words" fundraiser for the Lacombe Arts Endowment Fund, and hope that someone buys my piece.

And...tomorrow being September 23, it's not only the First Day of Fall in the Northern Hemisphere, but also the start of the 2019 SAQA Benefit Auction Section #2...and my quilt will be in this group that's on the block throughout the week:


Topping all this off...late Friday afternoon I got word that my second offer to purchase the two vacant lots next to my house had been accepted!!  The deposit to hold them has been made; money transfers are in the works, and I am dreaming about and doing research on how to deal with the trees and shrubs, long neglected, on the land.  Most of the labour will begin in the spring (after the SAQA conference in Toronto, thank goodness!) but there's snow removal (sidewalks) to think about etc. so...onward!

Here's what it looked like this afternoon, taken from the sidewalk to the north of the property. looking south: 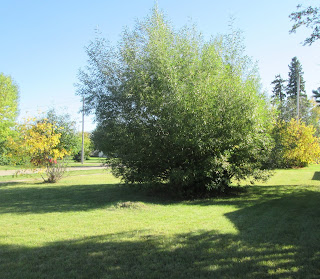 That large "bush" in the centre is a willow -- two, really -- cut down about a decade ago by the previous owners, who neglected to remove the stumps.  Hence the "bush". It's home to lots of birds in season, and on occasion provides shelter to mice and/or shrews (to my cat's delight).  I am loathe to get rid of it altogether, but the branches are multi-branched and not (at this point) good for basketry...so I am undecided how to manage it.  Blessedly, I have a few months to ponder this dilemma!

The small trees off to the left are a Mountain Ash (still green) and a Manitoba maple (now gold); I believe the latter insinuated itself into the area in which the Ash (aka 'Rowan') is growing.  Ditto for the "bushes" at the back -- several lilacs and a honeysuckle, intruded upon by a Manitoba maple. There's a possibility in that patch for a quiet retreat -- a wee vacant spot surrounded by the lilacs...if I can deal with the maple!

And so you see...a week full of blessings of assorted shapes and sizes.

Linking now to Nina Marie's Off the Wall Friday -- and wishing you the same for your week ahead.  It's the first week of fall in the Northern Hemi, and there may be snow before long...

Email ThisBlogThis!Share to TwitterShare to FacebookShare to Pinterest
Labels: Colour with a U, Off the Wall Friday, SAQA Benefit Auction, vacant lots, Wall-to-bed Project

Congratulations on your land purchase. I'm sure you will enjoy having a large open space instead of a brand new monster house.
Your quilt is looking very good.

Great happenings, Margaret. The quilt does not disappoint. Fabulous! I always liked the abstracted rose on the patchwork. And oh, good. You can dream and plan about your new yard while all the white swirls about!