Enough is as Good as a Feast...and a Commission

I've been home from Quebec almost a week now, and am still trying to get back into my usual routines!

The trip was five days of jam-packed visiting sandwiched between two full days of travel, so it was very full indeed.  I stayed with my friend since university days, Peg, and coerced convinced her to travel with me from the city to my hometown, to do cemetery visits, family visiting and to sit through a long graduation ceremony at my former high school.  She bore all of this with good grace, even going so far as to say that she didn't mind doing the driving as she needed the practice!  This was true, at least in part, as she doesn't need to use her car to get around the area in which she lives -- Westmount and central Montreal.  She's located so centrally, in fact, that she shops for groceries in the European fashion -- almost daily -- and has at her finger tips shops that purvey wide varieties of fruit, veggies, meats, fish, seafood, coffees, spices, cheeses, wines...Quite indulgent for a gal who now dwells in a tiny rural hamlet with a limited-selection central store, a beer-focused liquor store and 43 km. to the closest urban population!

Our drive out of the city was surprisingly easy, considering it's the height of Construction Season in Canada -- and Montreal is no exception!

We landed in my hometown of Huntingdon just in time for lunch.  We found a new venue in a building that had housed a general store as I was growing up.  It's now a restaurant run as a Co-operative that (as I understand it) provides work and skills for folks (mainly young) who've been down and out and are now coming into new life with purpose.  The chicken burger was recommended, so both Peg and I indulged!


After lunch Peg and I lost  found our way out to the country.  Misdirected slightly by one of the good folk at the restaurant, we ended up at our last-planned destination first: Hillside Cemetery and the Rennie Church (yes, named after my ancestors, who gave the land for both):

Most of my family is buried at Hillside, including my father, his siblings, my grandparents, great-grandparents, my great-great grandparents -- and my husband.

Somebody's recently had the GGG's marker cleaned because it -- a tall, white obelisk -- was pristine:


I can't say as much for my father and Howard (DH)...who've both collected  patches of lichen since my last visit (2013).  This is due in large part to a) the fact that both are next to each other in the shade of a beautiful red maple, and b) their inscriptions face the prevailing elements: wind, rain, snow...as do most of the markers in that cemetery!

I'll have to attend to that soon!

From there we went to Les Jardins de Glenelm, the enterprise in organic market gardening founded by my young cousin Sarah and her DH, Ian.  Sarah was off at a meeting -- with their little ones in tow! -- but Ian showed us around and we spent a happy couple of hours in the poly-tunnels and environs, inspecting their radishes, kohlrabi, carrots, lettuces and tomatoes.  They've opted to specialize in particular varieties of these for salad fixings, but also have strawberries, zucchini and have plans for Saskatoons (Ian grew up in Saskatoon).

I found art inspirations in the grasses, leaves and flowering plants all around the place: 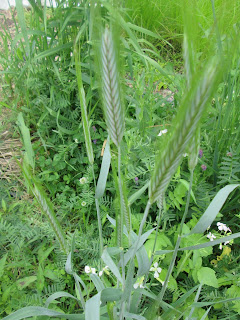 Peg was particularly interested because she is a "foodie", collecting cook books the way I collect books on fabric, fibre and floss.  She's also an avid gardener, and knows much more about plants (including their various names) than do I.  Here's what she's created in the gravelly patches of land around the apartment building's back alley where she lives in the city -- with the blessing of her landlord, by the way: 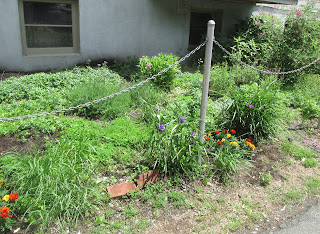 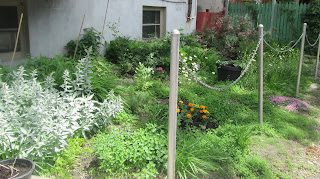 She's not daunted by the squirrel that's gone after her attempts at Brussels sprouts, and nipped off cone flowers and other plants down to the nub.  She persists -- and has created a colourful green space out of the most unwelcoming soil!

The main purpose of my visit was to present bursaries (in memory of my father and his sister, both teachers) to two students at the 2019 Graduation Ceremonies at my former high school.  I go back every few years to do this in person, and have done so since the bursaries were endowed in 2003.  This year was special because it was 50 years ago that I graduated, valedictorian of my class.  I really enjoyed meeting the two recipients of the bursaries and talking with them about their post-secondary education plans and dreams -- and briefly chatting with the 2019 valedictorian about the same.  All are exceptional young people, and I only hope and pray their lives will be filled with blessings, contentment, and good health as they go forward.


The Commission came the day after I arrived, when Peg and I went to lunch with an old friend of mine, now living in an assisted-living apartment very close to Peg.  My friend Jane had written me in May, saying she wanted me to make her a 'bed cover' of one of my art pieces.  "This is business", she wrote, and she was prepared to pay me.

I wrote back to explain that I'd be happy to make her a bed quilt, but that I don't design those -- I use either traditional patterns or patterns created more recently by someone else.  I sent her some photos of examples of my work in various formats (soft or on canvas and framed), sizes and at a variety of prices.

Jane was adamant.  She replied that she liked two of the examples in particular, and she wanted a bed cover, not a quilt.

I phoned her.  I explained that the only "bed cover" I could make would be a quilt because it had to have both a front and a back -- even if I left out any batting.  I agreed to have lunch when I got to Montreal, and promised to bring one of the examples she liked -- one I thought would best translate to the bed -- so we could talk more about it.

And that's what transpired.  In the end, Jane agreed to a bed quilt -- batting and all -- and to my price, which would include the cost of my long-arm quilter as I don't quilt pieces that are that large (72" x 86" desired size).  I showed her this piece, and explained how I thought it could be redesigned to suit a bed, assuring her that the bed quilt wouldn't be any thicker than the art piece:

I have a plan.  😊  I shared it with Jane, and she has approved -- because while the construction should be sturdy enough to serve on the bed, the composition needs to be artful.  (Did I mention that Jane studied Art at Hunter College in NYC and became an art teacher?  And that she still practices her water colour -- portraiture and still life?)

Katie PM's approach is just the ticket -- though I'm pretty sure she never planned the technique to be used for a large utilitarian piece!

One of the examples shown in the book was created from a photo of a landscape.  My "Trio" piece was similarly inspired, but I'm going to use the piece itself as the basis for this project.

I've begun by re-reading Katie's book, watching her segment on the technique on The Quilt Show, and selecting the 'random grid' option to use to create the blocks.  I've made a grid on an 8" x 10" print out of the photo of the piece, as well as on a clear plastic sheet (made from laminate off-cuts recycled from my daughter's office laminating machine) the size of the art piece.

I feel compelled to mention that this commission has scuttled any plans I had for dabbling with painting cheese cloth or mucking about with burning sheers this summer.

I'm definitely under a deadline!


So...enough for the moment!  I've got to get back to the sewdio!

I'll leave you with a link to Nina Marie's Off the Wall Friday.  This week she's celebrated a Big Birthday on her Blog. Do drop by to check out her celebration!

What a full week. So many great things to do. You do have a deadline! I am not familiar with this book but I have a few of Katie's. One I bought twice. 🤔 Valerie Wells does some of this and I went hunting but the one I have is more circles and curves but somewhere I have an article on her roses which are log cabin. I will be most interested in watching how this progresses.

Looks like you had a good trip. I'll be watching the progress of the commissioned piece.

Hi Margaret, that sounds like an amazing project. Good luck!