After the Show Indoors and Out

In my last post, I was about to show my work at the 20th Annual Lacombe Art Show & Sale.  Here's how the booth looked just before the doors opened:

It was an interesting time.  I really enjoyed connecting with artists I've met over the years, and from seeing new work by new entrants.  The "Paint-off" Friday evening was fun; I was rooting for an oil painter who was worried about how well he'd do with acrylic paint in the contest -- and he nailed it with a beautiful still life of irises. He wasn't the fastest painter, but I liked his piece the best.  (Sorry; I didn't get photos!)

Can you sense there's a "but" coming?

Yes...there's a "but".  There was a great flow of people through the show on both days -- despite a nasty spring snow storm Saturday morning that made travelling to the show a white-knuckle experience.  There was a lot of interest in my work -- and I sold one large piece (to a friend who'd been eyeing it since December at the "Shamrock and Thistle" exhibit) that more than covered my show fee.  There were more men interested in the work than I'd hitherto experienced.

But other than that...I sold only four pieces: two minis, and two small framed pieces -- and one of each of these went to other artists in exchange for pieces of their work.

And I had more "silly" comments about blankets and 'grandma used to do that sort of thing' than I've had since 2016.

Well...God willing there will be next year!  As Featured Artist for 2020, I'll have more booth space, an honourarium, a chance to speak bout my work...and other Good Things.  So...

Since the show, I've been busy in the yard and garden, cleaning up after the winter (yes, it eventually stopped snowing last weekend!), and planning out some improvements for this year.
One of those was extending the narrow bed on the east side of my garage, so I could plant lettuce and still find it when the rhubarb goes full tilt! 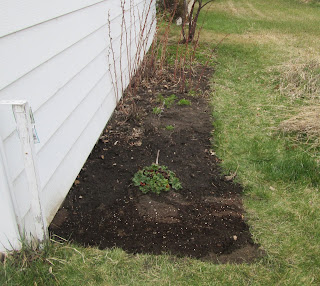 See that bit at the front of the photo?  The green clump is the burgeoning rhubarb.  The bed used to end just in front of the plant, but has now been extended to the end of the garage.  No more trying to wield the lawn mower into a narrow corner!  And yes...there will be lettuce and mixed greens growing at the very front of the bed.  (Lest you wonder...the land at the right side -- about 18" or so to the right of the bed -- isn't mine.  It's the empty lot next door, which is for sale.  I'd buy it but I can't afford it!)

I've managed this week to open the Outdoor Studio for a bit, and outfitted my not-so-comfy new bench with an old (but unused) quilt wrapped around some old bed pillows.  I tried it out last evening and it's not too bad for sitting... 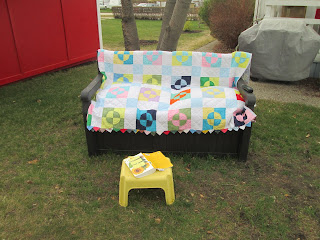 I found the quilt when, in the course of sorting and sifting after the show, I opened my blanket box for the first time in years.  I'd forgotten I had this one.  It's about a twin size, hand quilted, and made by my late Aunt Alice some time in the eighties -- mostly poly-cotton, I think.  It's in pristine condition, and is stored away in the bench when not in use.  The fun thing about the quilt is the Prairie Point border all around -- except at the top edge.  I recognized many of the miscellaneous fabrics used in that border, because they were scraps I'd given my aunt to use, left over from the garment sewing I was doing in those years when my kids were small: 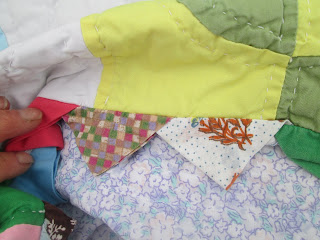 This sweet and colourful memory was celebrated by three new faces in the flower bed that's just under the window of my "messy room" on the south side of the house: 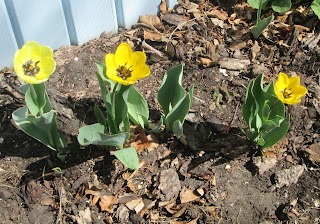 The yard work continues!  Some years ago a wee spruce seedling cropped up in the rock garden in the front of the house.  It had planted itself about a foot from the blue spruce -- my son's Grade IV transplant from Calgary, now almost 25 years old.  And there it stayed until last week, when it moved next door.  My neighbour had removed several old and rotting willows that had grown in a line between our properties, and was replacing them with young evergreen saplings.  My little green one was just right for a spot at the front near the street -- so I let him take it.  I was able to replace it with another sapling that had planted itself (with 2 others) in a large, unused flower pot near my shed.  So here's the new tot in the rock garden, in the shadow if Big Blue Brother Spruce:

I'll fill in that black patch with a bit more flox or other perennial ground cover, later this week. A trip to the local nursery is in order!  On the list: manure/loam/soil mix (bags), a few annuals for my pots, and the aforementioned ground cover.

In the evenings and early mornings my hands have been busy with MORE knitting finishing.  I finally got the two panels for the Mosaic Wrap done, and am now beavering away on the end borders, of which there are two.  The two panels will be sewn together to make a long wrap, and then finished off with borders on the other two edges.  The challenge of mosaic knitting is that you knit and knit and knit and knit and don't seem to make much progress -- and then, bingo!  Done!


I resurrected the centre of a 'Hap' shawl (Shetland style shawl) begun years ago, which needed its borders.  The first of four sides of a wide border is finished, and the second well underway.  After the wide border, comes a lace edging.  In addition I've finished a small neck shawlette for the church charity tree, and am working on a lovely cowl in a yummy alpaca and silk blend.  Photos will follow eventually!

Today I'm off for an over-night trip to Calgary to see friends -- and my friendly dentist (annual check-up).  Once back -- more gardening!

Linking this to Nina-Marie's Off the Wall Friday...where this week she's finishing her book review posts about Strong Women based on a book by Amy Morin (which I've not read).  One of the things such women do is boldly reinvent themselves.  My son said to me a few months ago, "I've watched you reinvent yourself [since Dad died]..."  I hadn't really thought of my life that way, but it's true.  My life now is Artist, Colour Lover, Grower, Maker, Occasional Volunteer, Friend and Mom.

Happy Mother's Day to all who are mothers or mother-figures in the lives of those around you.  Have a great week!
Posted by Margaret at 8:31 am

Happy Mother's Day. The children's story this morning was the story of Tabitha. To illustrate it was a picture of four women, but the women didn't have faces. The children, and the rest of us, were asked to imagine the faces of those women who serve within our church. Great imagery.

You do well on your shows and the experiences will be helpful for your stint next year. Snow. Plehh! But I do plan my yard so as to avoid those awkward corners. Yay for rhubarb, an early spring plant no matter the weather!