Do You Take Time Off?

C'mon.  I'm pretty sure you do!  Alright: I know you do!  Even if you're thinking about your art work 24/7, sometimes it's time to step away and attend to Other Things.  This can be particularly true if you're the only one in your household, so you have to pause from time to time to Take Care of Business.

And that's pretty much what I've been doing since my last post. My "break" began, really, at the end of April, right after the Lacombe Art Show & Sale.  It's not uncommon for folks to "crash" (or at least, slump a little) after a big event, and I did.  My hands, especially, didn't want to have anything to do with using my sewing machine or cutting fabric.  My hands wanted to knit and embroider and garden and hold good books.  Believe it or not, they even wanted to peel recalcitrant wall paper and wield a paint brush and roller.

And so they did. 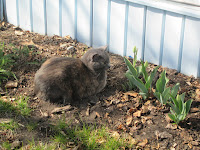 The need to paint a wall in my bedroom began a good three years ago (or longer), when Miss Pookie Cat (seen here supervising the tulips' growth) found a loose edge of wall paper -- an edge that had been pried loose a few more years before that, by my grand-cat, Princess, on a visit to my home.  Said edge had been hidden safely from prying paws for years, because that side of my bed was along the wall and my own cat at the time -- Diesel -- was too large to get between the wall and the bed to play with it.

Enter Pookie, the kitten, in 2012.  Some time in her first year or so with me, she discovered what fun it was to dive down beside the bed.  What treasures lay in the drawers that she could access from behind?  And wait!  What's this?!  Loose wall paper!  What fun!!

And so...bit by bit, she attacked it -- when I wasn't around or paying attention -- until there was nothing for me to do but peel it off in a swath, rendering the wall decidedly ugly.

That's when I decided to move my bed so that it was at 90 degrees to the wall -- hoping that this would motivate me to finish the job and paint the wall.

It took me a good three years (or more; I lost track) for that ploy to work -- but work it did, last month.  Here's a shot of the Peel in Progress. 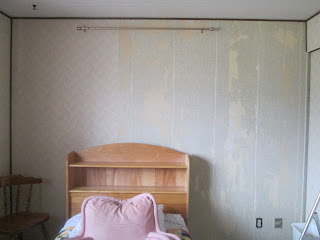 For a brief moment, I entertained the thought of not peeling the last two sheets of wall paper -- hitherto unscathed -- and just painting 2/3 of the wall...but I knew that would likely look too weird.  Sigh.

So I proceeded to finish the job.

In the process, though, I had to prepare the rest of the room, and that included Getting Rid of Stuff.  Said "stuff" referred mainly to books I'd either read and wouldn't likely read again, or books I no longer even cared about reading, and to yarn I'd been given or rescued that in reality, I'd never want to knit with.  Knitting friends, the local lending library and the church's annual Yard Sale were the beneficiaries.

And I ended up with a room that -- with the bed back along the wall -- feels much more spacious and open.  Lighter, even.  With room for some new artwork (even my own pieces!) on the wall...


In the midst of sifting and sorting, I tackled my guest room (aka where I store my art work) and opened my blanket box for the first time in years.  Therein I unearthed quilts I'd made -- one for my daughter and one for my late godmother -- and some I'd been given on my aunt's death, which I'd forgotten I had.  One of those I showed you, now adorning a bench in my Outdoor Studio in good weather.  Several others have now come out to hang on quilt racks -- one in the guest room, and one in my own room:


Here's a close up of that cozy corner.  The chair is antique; I believe it belonged first to my maternal grandmother, but it could be even older than that.  I know I've never seen another like it.  My mother refurbished it with the needlepoint decades ago.  To protect the seat, I've pinned (with short  T pins) thereon a small hanging I made in a class in another lifetime -- that I'd forgotten I had.  It seems to have worked (thus far!) to keep Miss Pookie from clawing at the chair's upholstery.


Just this past week, I made it back into the sewdio.  I'm travelling home to Quebec later this month and wanted to make a 'thank you' for my cousins, with whom I'll be staying part of the time.  Their eldest daughter, Sarah is -- like my daughter -- a talented photographer.  She and her husband Ian own an organic market veggie farm -- Les Jardins de Glenelm -- and she took this photo in March, when it had snowed -- yet again! 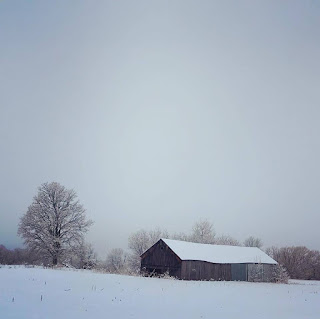 I fell in love with it and asked permission to recreate it in textiles, which was granted.  So...this week, I did: 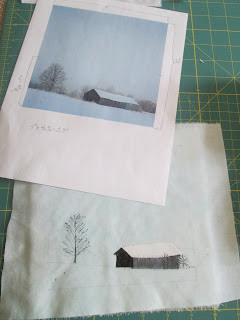 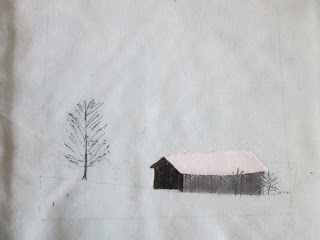 It's  a tiny piece -- just 6" square -- which I've wrapped around a stretched canvas and on Friday, took to my framer's for a floater.  I'll pick it up by week's end.  Alas, the lighting doesn't show it, but the background is a piece of recycled, thin, poly-cotton sheeting that I hand-dyed a pale blue.  Once I applied the fabric for the barn, I drew in the trees as guidelines, but there's much more stitching that's been done to finish it off.  I promise a photo of the finished piece before I take it to it's new home!

And so I leave you for the moment...and will link this up with Nina Marie's Off the Wall Friday before I go.  This week she shares "9 Tips to Unleash Your Creativity".  I seem to have been living Tip #4 -- after a fashion -- this past month...and very soon, I'll be following Tip #9.  Let's see where that leads, shall we?

Thanks for stopping by...I hope to 'see' you again soon!
Posted by Margaret at 7:33 am

I spent my Birthday recently REALLY cleaning and re-structuring my sewing room/bedroom, and while I share another room with hubster, I often just curl up in the sewing room because I am a night owl and he is out like a light at 8:30 (school bus driver and up at 5 am).

I have begun peeling wallpaper as well, and did the big purge, but am still shocked at how much sewing 'stuff' I have! More work is planned and fabrics boxed and labeled for artwork to donate for our new Hospice Kingston in this next year, and some for our Seniors Residence, Fairmount Home. Their rooms always need comfort covers and bright wall art!

Looks like we might be passing in the sky. I am heading west in a couple of weeks.
I am sure your cousin and her daughter will enjoy the reproduction of the barn.

I love the way your room looks now, so cozy and inviting! I am eager to see your snow scene finished. It looks beautiful so far! I need to spend several days going through my studio again. You are an inspiration!

Good for you to get those old half done projects out of the way. A break from the fun stuff but gratifying. What a great photo that makes into memorable artwork!