The 20th Annual Lacombe Art Show and Sale is less than 2 weeks away now.  With the Bursary applications I was working on (see my last post) completed, packed up and sent back to the Educational Foundation last Monday, I was able to get back to show prep...and other things (READ: yard work).

It's about time -- as the wind howls outside and the rain comes down in fits and starts -- that I shared with you more of what I've been doing to get ready for this show, and other studio news.

In my last "studio post", I'd finished "Before the Crowds" and submitted it for consideration by the Grand National jury.  The deadline for entries was yesterday...so now I wait.  It needs its sleeve nonetheless, and that will happen this week, because if it isn't accepted at GN, it will go with me to the Lacombe Art Show/Sale.

Since then...several pieces have been finished -- mainly mounted on canvas -- and most have been framed.  I have three that are being framed now, and that will be the end of it for the time being.

So let me start from the top!

The problem is, it's a bit of a blur!  I've just been making and making...

A couple of Sundays ago I got a chance for my favourite walk around Cranna Lake in Lacombe, and shot some tree photos, like these: 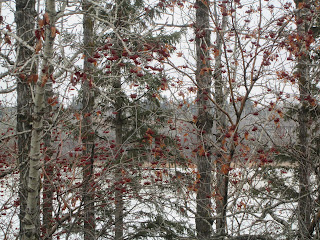 I just love these "March Trees" with their bits of berries and detritus, and all the layering, so I decided to do a series.

The top photo served as inspiration for mono-printing: 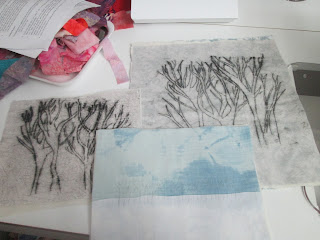 NOTE: the front piece wasn't mono-printed, but if you look closely you can see trees drawn on the surface.  It becomes something else, so read on!

I ended up with two pieces, one of which became a new "mini", mono-printed and beaded:


Another one became a piece that was faced and beaded and mounted on painted stretched canvas...and is now in for framing (stay tuned for a photo sometime after Easter).

And then there's that photo of a myriad of trees over-looking the lake (scroll up).  This one is now finished and at the framer's...but here are some of the steps I took to creating it:

Sorry; you'll have to wait for the final photo -- this is one piece that's over at the framer's and might not be finished till a couple of days before the show!  It's mounted on 12" square stretched canvas...just to let you know the size.  Title: March Trees I.

And yes, there is a "March Trees III", resembling the mini (above) but larger and mounted on painted stretched canvas (it's also 12" x 12").  It too is in for framing.  Stay tuned!

Continuing in the 'tree' theme, in the process of making sleeves for a couple of soft pieces (In the Bleak Mid-winter and Content of Our Waiting, now finished), I came across a piece of fabric on which I'd made marks in a short workshop with Susan Purney Mark at the SAQA Western Canada Regional Retreat a couple of years ago.  I hadn't filed it with my 'samples' because I knew that eventually I'd want to make it into something, and this week it became another new 'mini':


And remember that piece of sky and foreground with trees drawn on the surface (scroll up)?  Well...it became a mini too...

Yes, that mat is not my "usual".  It was one I got on sale from a shop that's now closed. It has a "faux suede" surface and I've been waiting a good 3 years till I found a piece it suited!  This piece is based on a memory I have of a trio of grain bins set against a tree line that I drove past on my way to work in late winter/early spring this year.  Slices of blue in the sky amid the clouds, and snow still on the ground.  I had to hold on to the memory until I could sketch it out in my sketch book as I had no camera handy and I was driving!

The New Directions series has continued.  This is New Directions 2, mounted on canvas but of a size that it won't be framed -- just wired for hanging. 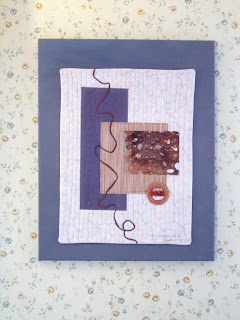 New Directions 4 and 5 have been framed but -- sorry, no photos as of this writing.  Clearly they got lost in the shuffle!  😉

Remember "Blue Pot"?  It was a piece I made for an Alberta Society of Artists fundraiser last fall.  Well...I've followed it with the smaller "Red Pot", based on a photo of lobelia I've managed to over-winter in my sunny back room...

I certainly hope some of these sell at the Lacombe Art Show/Sale, because pieces are starting to pile up!

Blessedly I was able to take six (count 'em!) older pieces -- in a 'rural' theme -- over to sell on consignment at a new shop that opens next week at the nearby Village of Alix.  I went over there on Friday morning to mount them, with Carrie, the owner's, help.  Her laser level is amazing!

Here they are, on two different walls:

This second one is on a narrow hallway without a way to take a really good photo, but you get the idea.  Carrie loves them and is sure they'll be a hit.  She's a bit more optimistic than I am here in Bed Quilt Central! -- but at least I've got them out and into the world, so I need to remain hopeful.  I certainly appreciate her support!

And now, my friends...that's it.  You're all caught up except for a few photos!  The knitting and spinning continue, as I'm determined to spin up roving that's been around for far too long.  I'm determined to finish a shawl and a wrap before I begin my "Summer of Socks".  And there's a bedroom wall to paint and an old trunk to refurbish as a planter this summer...so...

Onward and upward!  Linking this to Nina-Marie's "Off the Wall Friday", and thinking perhaps a retreat like the one she just enjoyed wouldn't be a bad idea!  😉

Have a great week, everyone!

You have been busy! So exciting about your work in the new place. Congratulations!

All of your pieces wonderful, but I like the red pot best. Maybe I've just had too much winter.
Good luck with all your pieces.

Beautiful post, Marg... with all of the vigor and determination I always see in your stunning artwork adventures! Love the Red Pot and lobelia is my all time favourite... so I would all this to my collection right off the post... why wait for Lacombe? Also loving the four on the wall together in the last photo!

These are fabulous. luv that plant. Thanks for the process shots!