In and Out of the Sewdio

I can't believe it's been three (count 'em!) weeks since I last posted.  Oh well.  Time flies when you're having fun!  And we are, aren't we?

As long as we don't get caught up in the international news of the day hour minute!  I've been engaged in a great deal of textile therapy in order to keep sane, sensible and loving.  It takes work, I tell ya!  It takes work!

When last we communed, Gentle Readers, I was in the throes of "Piecer Madness".  I'm still working at the edges of that so-called "malady", but there's been progress!

First, the TQS Block of the Month for 2018 -- my "Barn Quilt That's Not" -- is finished.  At least, the top is!  At 72.5" x 82.5", I've tucked it away till I can get some wide backing for it -- likely from Hamels' Fabrics when they're at the Central Alberta Quilt Show in the spring, when they have deals on the stuff and I can pick it up in person.  I finished the final 2 strips of blocks and added a zinger and a border, thus:

In matters of All Things Pieced, I've moved on to try to finish the "On Ringo Lake" top -- Bonnie Hunter's 2017 Mystery Quilt.  It seems only fitting -- as she just launched the first clue for the 2018 MQ!  😉  I don't know as I'll do the 2018 one -- I find I'm captivated by neither the theme nor the colours -- but time will tell.  Meanwhile, I've finished the first five rows (on point):

As you can see, it's a large top!  And the second half is taking shape on my design wall: 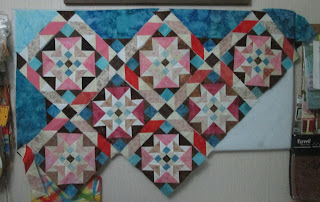 Would you believe that both of these projects have emerged entirely from stash fabric (except for 1/4 metre of red for the "zinger" in the TQS BOM)?!  I swear my scraps breed in the night!!

What I've not told you, Gentle Readers, is that between my last post and the work just described, I created a new piece in time to answer the Call for Entry from the Alberta Society of Artists for it's themed show, "Nocturn".

I had this photo (with permission) from my daughter, of a full moon taken in August of this year up in Edmonton, showing the colour of the moon/sky altered by the smoke that had travelled from wild fires in British Columbia (to the west) and from northern Alberta.

First, I had to audition fabric for the sky, and create samples of the moon.  I tried removing colour (using "Decolorant") but it did nothing on the commercial fabric I wanted to use for the sky.  Thus I knew I had to paint in the moon.  I tried several combinations of acrylic and fabric paints, till I got what I wanted:

I also had to do some copying, enlarging, tracing and cutting to create the 'tree' template:

I found a wonderful batik for the tree fabric, which didn't fray (much).  I then marked out the finished size of the piece (which I planned to wrap around stretched canvas) and laid the "trees" out on the "sky": 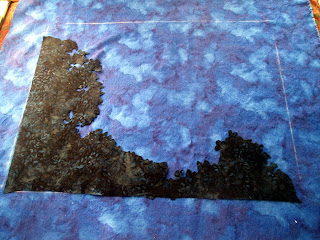 I sewed down the edges of that 'tree' fabric and then I added the moon: 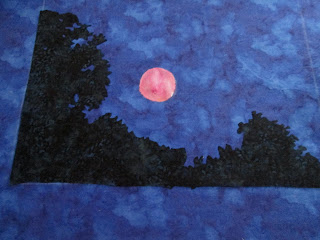 Then I sandwiched the piece for quilting, and machine quilted around the moon and then through the sky.  Finally I used seed stitch by hand in a toned-in blue silk floss to add texture to the trees, and needle-felted in a bit of roving for the clouds, before wrapping it around the 1/2"-deep canvas.


I entered the piece online on Monday, and yesterday I took it to my framer's in Stettler for mounting in a floater frame, giving it a bit more 'polish'.   I won't find out the jury's results till December 10, and if accepted, it won't go up in the exhibit until March or April (TBD), but I want it ready for whatever happens.

That's because...I have applied for a spot at the new Homestead Artists' Collective for the months of either a) April through July; or b) August through November, 2019.  And the Call for Artists for the 20th (!) Annual Lacombe Art Show & Sale has just come out (it will be near the end of April, 2019).  I'll be hitting the ground running to make new work come January...


Like the second sock of this pair for my neighbour, Edna... 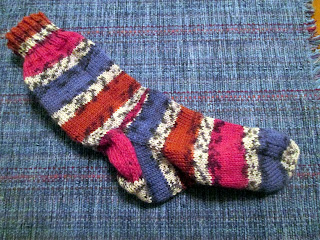 And the finger-less gloves for my friend Peg in Montreal...

And this sweater jacket for my daughter, long in the making...

Oh...and the fabric for the Annual Xmas Boxer Shorts has been purchased and washed, and the pattern located.  Just need to pick up some more elastic for the waist band and...well...make them, of course!!

Thirty days till Christmas Eve?  Travelling up to Edmonton in 29 days?  I'd best stop writing and get knitting!!

I'll leave you with this link to Nina Marie's Off the Wall Friday -- having counted my blessings: friends, family (especially my kids) and The Ability to Work with My Hands.  Have a great week -- and "see" you again soon, I hope!
Posted by Margaret at 4:23 pm

You certainly let have been busy, much to busy to blog. You have completed a lot in a very short time.
I have been looking at my Christmas list and think I might have put too many projects on it. Time will tell.

Ringo Lake is coming together beautifully. And all your other projects are amazing.