I don't know about you, Gentle Readers -- especially those of you who are art quilters -- but (as I've undoubtedly mentioned in the past) making Original Art can be exhausting for me. For most of my life I've been known as a very organized, detail-oriented, orderly person.

It would seem, however, that sometime around the age of 50, my persona took a sharp turn off the Straight and Narrow and onto a much more winding road.  I began to move away from Following ALL the Rules to listening to the beat of my Inner Artist.

But for a period of time each year -- usually between projects and very often in the fall -- my brain becomes too cramped to create unique-to-me work and I find myself following Other People's Instructions (OPI). 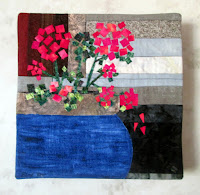 Yes...there is art brewing.  I've been laying out fabrics and making notes for an ASA Call for Entry, for a Sacred Threads Call for Entry and for a new series that I want to showcase in the spring. A new Artists' Co-op is opening up and I've been mulling over the terms of the application to participate in that next year.

But...at the moment I am working my way through an assortment of other projects -- mainly pieced -- and there's no stopping soon! 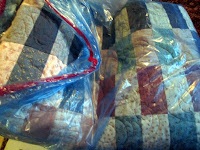 I got the Rectangle Quilt -- a top finished a few months ago -- quilted (long-arm quilter up the road is very good, and reasonably priced!) and bound and off to a new home -- a gift to a fellow who lives nearby and whose home recently went up in smoke due (it's suspected) to the deterioration of or a faulty join in the chimney pipe from his self-assembled wood stove.

I've had another top quilted -- a gift for a friend's birthday -- and I'm now sewing down the binding.  (No photo; she might read this!)

Both of these are around 60" W by 70" to 80" L, as is this third top, ostensibly for my bedroom, replacing at least one of my collection that's wearing out...

The fabric is -- as you can see -- wildly coloured, and it's printed with a sewing theme.  I fell in love with it over a decade ago and finally got it together.  Yes, there's a pattern -- "Summer Citrus", designed by Nellie Holmes and Christine Baker, for the Spring 2009 edition of the Canadian magazine, A Needle Pulling Thread.  I'm not sure my fabric selections were ideal for this pattern, but the resulting top is growing on me!  😉

Then there's the 2018 Block of the Month from The Quilt Show.  But...I didn't want to do either the central 'barn' motif or the applique borders.  Blessedly, there was posted an alternate central motif:


I modified mine by choosing a solid border instead of a Saw-tooth, and using a white print for the background instead of a more solid white: 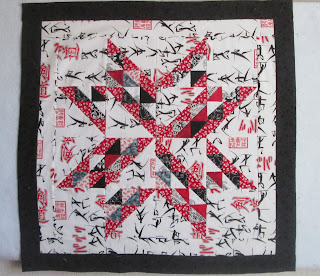 Ms. Black goes on to create another border with the applique border motifs from the original Patchwork Barn pattern, and turned the whole piece into a wall hanging -- very pretty, but not my cuppa!

Here's how mine looks once I began to surround it with sashing and the 6" (finished) blocks that form the body of the quilt: 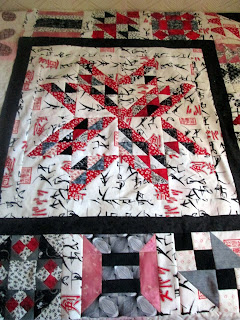 And here's the top lying on the guest room bed.  You can see that it needs a couple more rows -- one on each side -- to make it wide enough.  Then there will be at least one solid-colour border to finish it off. 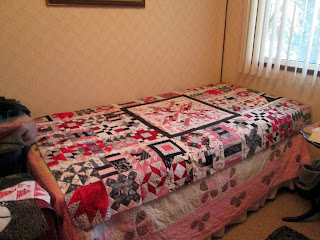 So... I am creating 18 more of the original blocks, and 4 that are different.  Here are several of those additional blocks, stacked and ready to sew into rows: 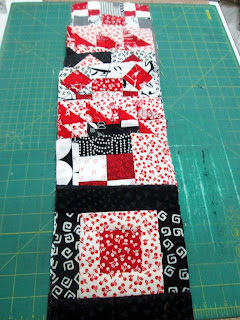 The good news about this, is that I'm really using up my red, white and black fabric scraps -- along with a bit of a dusty pink and some grey.

The bad news is...that I might run out of "darks" (red and black) by the time I get to the outer borders!

So...it's true.  You can work hard to use up your fabric scraps, but you usually end up adding to them because you have to buy more fabric to finish the project!  (The same goes for knitting and crochet stashes.  Sigh.)

This quilt is destined for my guest room...but, like the sewing-themed top (above), it'll take me a while to have them quilted.  These tops -- IMHO -- didn't lend themselves to a "quilt-in-sections" approach.  While my new machine has a wider harp, I'm still loathe to quilt a top this large here at home.

Besides the actual quilting, my other stumbling block is trying to sandwich anything this size in limited floor space.  In the summer, I can make large sandwiches in my Outdoor Studio, but at this time of year...there's just no room!  Thus these two tops will have to wait till I either can afford the long-arm again OR June rolls around and I can assemble them outdoors and quilt them myself!

Well...Bonnie Hunter's next mystery has just been announced, so that will take some consideration.  And I still have to finish last year's -- "On Ringo Lake".  All the blocks are finished; it's just assembling the top that's needed.  And that one is very large, so it definitely will go under a long arm!

But in the thick of this, one of those Calls (the ASA) has a fast-approaching deadline, and there are Christmas gifts on the knitting needles so...

As soon as I sign off, you'll be finding me in the Sewdio.  For ongoing encouragement and inspiration, I'm linking this to Nina-Marie's Off the Wall Friday -- and I wish you a happy weekend!
Posted by Margaret at 11:17 am

You have been very busy! Some long arm Quilters will bast a quilt for you, for much less than the price of quilting it. You might want to ask. I can borrow tables at the church to baste my quilts, while the church group is quilting.