It's been a couple of weeks since I've posted, I know, and this post is going to be short and sweet.


The Lacombe Show drew good crowds of all ages, and was a lovely atmosphere in which to show my work.  There was much admiration and exclamation over all the artists' work...but nothing moved in the way of major sales until about four hours before the end of the show on Saturday afternoon.

Then -- wow!  Not only was there a good crowd of viewers, but also, people started to buy.  In the end, it was a 'good' show for me...selling one large piece and several of my small, framed pieces. 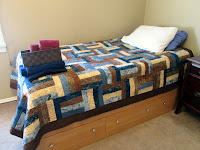 Two days later I was on the road to Edmonton to visit my daughter, taking the finished 'Random Rails' with me.  It looks great in the single guest room of her Air B&B...another happy client!  😊

The trip, in the main, was to enjoy the Christmas gift she'd given me -- tickets for the two of us to see "2 Cellos" at the Northern Alberta Jubilee Auditorium.

Another "WOW!" -- beauty, poignancy, delicacy, humour -- combined with throbbing hard rock at HIGH volume!  You'd have to see it yourself to really get the 'gist'...so I'll just give you a taste from You Tube...one of the pieces they played at the concert...


Needless to say, after all that excitement, I was glad to be quiet the next day...but I had another client to see, an older woman not on the Internet, with whom I'd been corresponding by mail and telephone since January, when she'd seen my work at the Deep Freeze Festival in Edmonton and became interested.


Now these two pieces have a new home:

The rest of that week was filled with work at The Shop, taking some of my remaining pieces up to In.Spire! Yarn Boutique and Gift Gallery in Bashaw, and taking the car in for regular servicing and the swap out from winter to non-winter tires.


After that, I'll I've wanted to do was knit.

I'm working on a sweater for my daughter, a shawl for me, and most recently, a Murder Mystery Knit-Along (MMKAL) taking place on Ravelry.


I've had to curb my impulse to knit every waking moment, though, as I have five more pieces to create for the Camrose Art Walk -- and a deadline of mid-July -- as well as trying to pull together a large piece for a SAQA Call for Entry (which I know I've mentioned before).  I'm not sure if it will be finished in time.  Even if it's finished, it will have to be photographed, and it's too large to do here.  My daughter is willing to do that work, but it means coordinating a visit to her up in Edmonton... 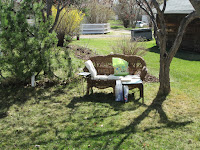 Meanwhile, the Outdoor Studio is once again Open for The Season, and most of my yard work is done (raking, tidying the flower beds), so I can do the handwork on the above-mentioned Project in the sunshine on my bench...and that's where you'll find me this afternoon.

Linking up to Nina Marie's Off the Wall Friday.  She's off on vacation, but the creativity continues...

Have a great rest of the weekend, everyone!

Looks like you had a highly successful trip.
Enjoy your outdoor studio. Mine still needs a bit (or a lot) of work.