Today's mail brought a most unusual and beautiful Mother's Day card from my son and daughter-in-law.  I've found out it's a "Red Sekura Tree" pop-up card from a company called lovepops.com .   I have it propped open on my buffet, where it will undoubtedly live for some time; it is so very lovely and artistically unusual.

Included with the card was a  gift I love to get any time -- a Starbucks gift card.  And with that, an effusive 'thank you'.  The latter never fails to bring me some measure of delight mingled with amusement, because while I don't doubt its sincerity, I find myself rather uncomfortable being on the receiving end of such adulation.  I don't know quite how to respond, or where to put the emotions so stirred up.

All of this got me to thinking about Mother's Day in general, remembering past plots entered into between my late husband and the kids when they were small, to make the day special for me -- and trying to remember what I did for and with my own mother to honour her on that day.

And that mental meandering took me to one of my favourite poems -- this one from former Poet Laureate of the United States, Billy Collins.


The other day as I was ricocheting slowly
off the blue walls of this room
bouncing from typewriter to piano
from bookshelf to an envelope lying on the floor,
I found myself in the 'L' section of the dictionary
where my eyes fell upon the word, Lanyard.
No cookie nibbled by a French novelist
could send one more suddenly into the past.
A past where I sat at a workbench
at a camp by a deep Adirondack lake
learning how to braid thin plastic strips into a lanyard.
A gift for my mother.
I had never seen anyone use a lanyard.
Or wear one, if that's what you did with them.
But that did not keep me from crossing strand over strand
again and again until I had made a boxy, red and white lanyard for my mother.
She gave me life and milk from her breasts,
and I gave her a lanyard
She nursed me in many a sick room,
lifted teaspoons of medicine to my lips,
set cold facecloths on my forehead
then led me out into the airy light
and taught me to walk and swim and I in turn presented her with a lanyard.
'Here are thousands of meals' she said,
'and here is clothing and a good education.'
'And here is your lanyard,' I replied,
'which I made with a little help from a counselor.'
'Here is a breathing body and a beating heart,
strong legs, bones and teeth and two clear eyes to read the world.' she whispered.
'And here,' I said, 'is the lanyard I made at camp.'
'And here,' I wish to say to her now,
'is a smaller gift. Not the archaic truth,
that you can never repay your mother,
but the rueful admission that when she took the two-toned lanyard from my hands,
I was as sure as a boy could be
that this useless worthless thing I wove out of boredom
would be enough to make us even.'
-- Billy Collins


These are some of the "lanyards" my kids made for me...decades ago.  I treasure each and every one.  I use the mat on the left under the iron on my ironing board in my studio.  I use the mat on the right as a pot-holder or candle mat on a regular basis.  The wee pots and the tiny clay dog are ensconced on bookshelves to decorate my home and delight me when I remember the small hands that made them.

I've often wondered over the years...considering what a non-maternal mother I was...how I managed to have and help raise children.

Still, like so many who've been Doubting Parents over the centuries, I can't imagine life without mine. 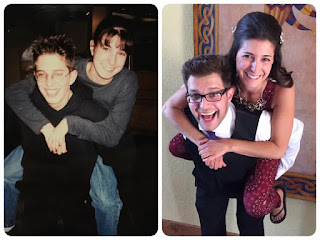 There is no question;
indeed, we are "even".