The pre-Easter puttering paid off over this past weekend, giving me the boost I needed to try some new things, and put together four more pieces for the upcoming Lacombe Art Show & Sale.

Inspiration for three of them came from my friend Bob, whom I met in a prior life 😉.  I lived in Calgary then, and as an aspiring writer (long story) joined the Alexandra Writer's Society.  He was a member too, and both of us served on the organization's Board for a few years.  I was the librarian for the Society, and he...I think he was Chair or something important like that!

Now both of us write blogs -- and both make visual art: textiles for me, photography for him.

My first effort from his work was a mini, sold long ago -- so long ago that I had to dig the photo of it out of an old blog post; it wasn't in my files!


Friday's snowstorm found me in the studio with three of Bob's photos -- and one of my own -- in mind, digging through my books, working in my sketchbook.

This first one he took on a trip to Grenada -- and the aquas and blues seen through the skeleto of what must have been a home, once, simply captivated me. 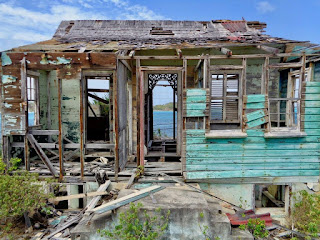 I also knew I could get very caught up in the details of it, so I tried to break it down by printing it in black and white... 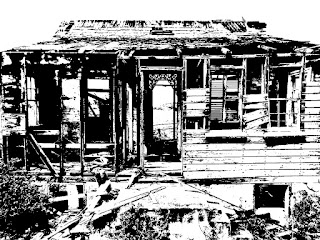 And then with an effect called "old photograph"... 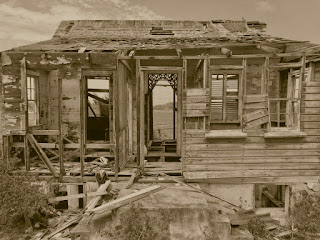 In the end I took the colour photo, tracked a grid over it, and narrowed in on one section.  I did a colour study of that isolated bit, and then attempted to recreate it in a rather abstracted way.

I quilted it on a piece of white craft felt, stitching down the edges; it finished at 8" x 10", and added touches of water-colour pencil here and there as I felt called.  Then I secured it with matte gel medium to a 12" x 12" canvas that I'd painted to give it a 'tropical' feel.  I'll take it to be put in a floater frame later this week:


Can you tell which section I used?  Here's a hint: 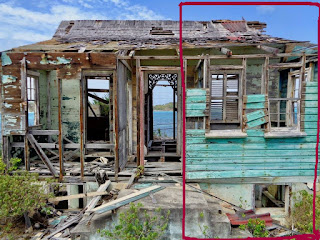 I then moved on to something more "inside my box"...a pair of small canvases (5" x 7") that will be framed this week too.  Here's a photo of the prep of the backgrounds; both inspirational photos are of Alberta scenes that Bob took on drives around the countryside: 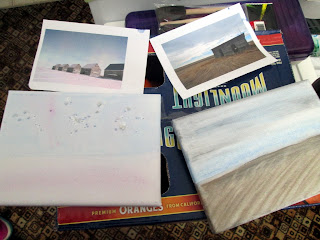 And here's one, finished and ready for framing... 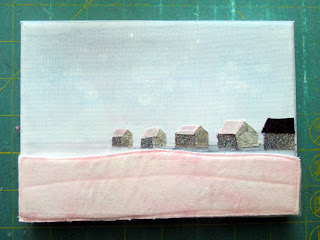 I'm not sure of a title just yet...these are either old barns or grain bins near Beiseker, Alberta, taken on a wintry evening where faint pink hints of the Aurora in the starry sky added to the odd colouring of the snow on the ground.  "Beiseker Barns" just sounds too..."cute".  If anyone has an idea, just leave a comment -- with my thanks!

Inspired, I continued to play with paint, working finally on a piece of light-weight scrap canvas my framer gave me.  It had some discoloured spots, so I washed it, and in drying it, squeezed it, meaning that despite ironing (under a pressing cloth, on the side without gesso priming), it retained a bit of a 'crinkled' look.  I decided I liked that, as it gave an interesting texture to the painted surface. 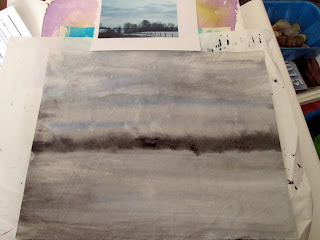 You can see the inspirational photo at the top. I took it on my way to the studio of my long-arm quilter, Sylvia, who lives north-east of here just a wee bit.

Once it was painted, I put it under the needle, and added a bit more colour with water-colour pencils: 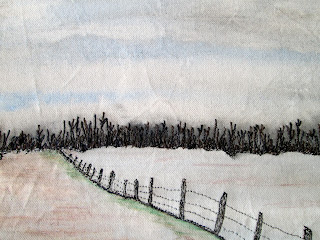 Then I found a mat for it -- thanks to some cast-offs recycling from my former water-colour teacher, Sharon Lynn Williams of Calgary, who went back to work in acrylics, oils and encaustic after several years of working in water-colour.

It's a good big mat (the canvas is 9" x 11") -- a double mat, in fact, and too me, it suits the piece down to the ground.  Before attaching it to the mat, I applied the piece to a slightly larger piece of mat board, again using mat gel medium.

I've decided, however, not to frame this one.  Whoever buys it can frame it the way they want to.  I just propped it in this stand for the photo:

All in all, it's been a good five or six days.  Today...taking it a bit easier, working on string blocks for that larger piece I've mentioned before, and which is still very much a work in progress.

It's snowing here (again!) today -- thick, fat flakes that melt on the pavement but pile up on the old snow and any icy patches that remain from earlier 'melts's, and there are plenty of those.

I'm seriously thinking of curling up for a nap, but before I do, I'll link this to WIP Wednesday over at The Needle and Thread Network, and leave you with this photo of the third (of three) blocks for The Quilt Show's 2018 Block of the Month, which I also finished this past weekend.  Sometimes, after original work, my brain needs a break, so I go back to piecing.  Ahhhhh....

Have a great rest of the week, everyone!
Posted by Margaret at 2:01 pm

I love to hear of your process of making. I do like Beiseker Barns
as a title, if you don't mind another opinion.

Really enjoy reading about your process. And, if you don't mind
another opinion, I like Beiseker Barns as a title.

Hi Margaret, Love your interpretation of the old house. We always call those buildings near Beiseker the Five Sheds or Five Barns. Photographers love them because they are more or less identical, equidistant, and in a straight line. Bob

I celebrate how far you have come with your miniature landscapes. I remember your first hesitant efforts and compare them to your confident, ever expanding collection. Wow

For a name, is am not sure but it reminds me of that magical winter moments as the sun has slipped below the horizon and if we stop, and open our awareness we are aware of the magic in the world, or feel the breath of God on our shoulder.