This week I've been making more fabric -- in the form of bed quilt tops.  Well...isn't that what we do when we cut up existing fabric, or piece scraps together?  Aren't we creating a new fabric?  😊

As an art quilter, I don't often make bed quilts, but the last year or two (or three!) I've had reason to make everything from comfort (lap) quilts to crib quilts to twin- and king-sized ones.  The latest crop of tops are twin-sized, and came about thus: 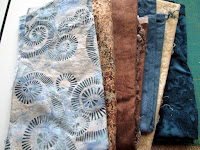 First, my daughter commissioned me to make one for the twin bed in her Air B&B single guest room, as the summer coverlet she had on it is wearing out.  (She has a double-bed room too, but its bedding is fine for now!)

Last summer we had a buying trip and got most of the fabric -- but as I was winging it on the calculations...well...let's just say I began it in earnest at the end of January and got only 1/2 the blocks needed out of the fabric on hand.  Blessedly, by my last post I was able to report that between us we found either exact matches or colour-ways that worked in beautifully, and that top is now ready to be quilted.

It was a not-so-easy Rail Fence.  Four rails (rather than the usual three) and "as random as possible, please, Mom."  (Hold that thought; I'm coming back to it in a moment.)

Nonetheless, I think it turned out well and hope she'll like it: 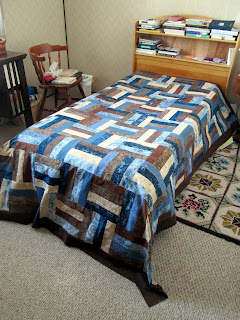 I call it "Random Rails" or "Fractured Fences" -- depending on my mood! 😉 With borders, it will measure 70" W x 94" long when bound.  It looks enormous on my own twin bed, in large part because I don't have the a deep box spring under my mattress, whereas she does.  Last weekend I procured a rich double-chocolate wide backing for it (now washed).  Yummy!

Second, my own beloved bed quilts are wearing.  Most of these were made by my quilty Aunt Alice, my father's sister, who died in 2002 at the age of 94, so you can imagine how old they are!

I'm making four tops (which I also mentioned in my last post).  The first one to be finished was my "(Not So) Grand Illusion", a Bonnie Hunter Mystery Quilt from 2014 (!) which I finished in November in order to justify starting her 2017 Mystery, "On Ringo Lake" (ORL).   Lest you missed that post, here's a photo: 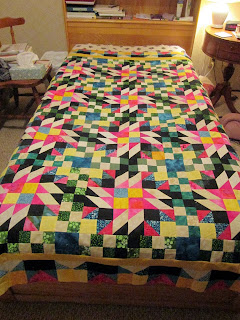 I just love this one, and this week I found the perfect wide backing for it!

The second one is the "Rectangle Quilt" (what an original name!) that I showed you -- under construction -- in my last post.  That top, too, is now finished! 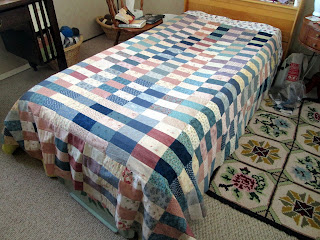 Now, remember that thought I asked you to hold?  The fact that the Random Rails/Fractured Fences was ''not so easy"?  This is where I get back to this subject, and focus on the word "random".  As defined by the Oxford Living Dictionaries, 'random' means "Made, done, or happening without method or conscious decision" or, when it comes to statistics, "Governed by or involving equal chances for each item".

Well.  It might be a simple concept...but it's not easy! 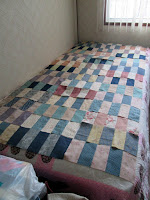 Both the rectangle and the rails/fences quilt required a) combinations of light, medium and/or dark fabrics to create contrast and movement; b) specific placement of said combinations -- that is, so many blocks across and so many rows down; and c) an arrangement that in order to be pleasing, was...well...random.  And random arrangements of anything (I'm guessing) require a certain...um...conscious intentionality! 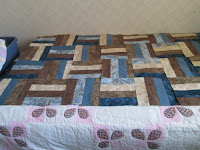 I found a method that worked first with the Rectangle Quilt and then with Rails/Fences --first, lay the blocks out on my "horizontal design wall" (my bed or my guest bed, whichever showed them off best); next, get the first two rows to work well, and sew the first row in pairs of blocks; then...move 'em around, interject different pairs, do whatever is needed to make everything play nicely together.

Repeat till the entire arrangement is appealing, and still "random" in nature.  In all of my  attempts at designing "traditional" quilts, I've determined that they are at least as challenging (if not more so) as designing an art quilt.  The methods may be different, but the brain strain is on a par!

Of the four tops I've planned, only these three are finished.  The fourth requires borders...so it's worthy only of a mention here.  It will appear in a later post!

I've picked up "Storm Brewing" from the framer...I love it!


The Call for Entry to the Annual Camrose Art Walk is now open, and my colleague Mary and I will be submitting our applications shortly for our Scotland-inspired collaborative exhibit.  Each of us is aiming for eight or nine pieces.  So far, I have five (including "Storm Brewing..."), but one is a tiny canvas and unless I make more that size, won't be included.

And as I now know that I will once again have a booth at the 19th Annual Lacombe Art Show & Sale, I am busy with pieces for that.  The "Crumbpilations" pieces are all in for framing, one mini is in the planning stages, and I finished this one this morning:

It's a statement about driving to work -- about 8:15 a.m. -- in the Mists of March in these parts.  The other day the fog was so dense that while I knew there was a tanker truck in front of me, I often couldn't see it at all, and was praying he wouldn't have to brake unexpectedly! Thanks to Elizabeth Barton's Master Class, which I attended throughout 2015, I learned a bit about getting that perspective in place.  In a 'mini' it's tough because everything is smaller and fore-shortened, but there you have it!

Well, Gentle Readers, that's all the news that's fit to print for this go 'round.  I'm going to link this up to Nina Marie's Off the Wall Friday, and bid you adieu.

This week she published a quote about the Art of Science and the Science of Art...and looking at my projects, I can certainly ascertain a link between the two!

Happy St. Patrick's Day for all the Irish -- and all the I-Wannabee-Irish!  Happy International Quilting Day for all of you who quilt!

Really nice bedquilts but I LOVE LOVE the storm brewing. Fog warning is beautiful too.