Off to a Slow Start (sort of)

Ah...January.  The first month of a New Year (of sorts; September is too).  The Month of Resolutions...or promises...or goal-setting.

And if you read my last post, 'wa-a-a-ay earlier this month, you'll know I had my share of New Year's Optimism goin' on.  While I'd vowed to "Keep It Simple", I didn't realize how well the "Universe" listened to that vow, and took steps to help me by Slowing Me Down.

I've been pretty good at setting aside Wednesdays as 'charity' days, working mainly on charity knitting projects.  All the ones I showed in my post have been taken to the church and a narrow scarf that languished at 20 inches is now 34 and growing (the pattern calls for another 17 inches), while a pair of simple mittens is half-finished.

I've made all 9 of the blocks for the "Barn Quilt" Block of the Month:

(All of these will become a quilt top for charity.)

I've been working on art pieces...with second thoughts about having a full booth at Lacombe this year.  There's an option called "The Gallery", which will take a few (3, I think) pieces...and I don't have to be there all the time.  That's becoming more appealing as I work through "Keep It Simple".

But for now...I showed 2 pieces at the Deep Freeze Festival in Edmonton -- a juried exhibit.  I made no sales, but am working with a client to fulfill a commission she would like.  It looks like she might go for a mixed media piece on stretched canvas -- a small one, featuring trees.  Photos will be on the way to her this week -- snail mail, as she's an older lady and (her words) "I'm illiterate" when it comes to the computer (she doesn't own one).

As for finished work...awaiting 'floater' frames... there's one small one in the "Wintry Skies" series:

And there's a larger one -- my first attempt at this technique in a larger size! -- in the "Inspired by Scotland" series:

I confess I am particularly thrilled with this last one...and the thrill of it is almost intimidating when it comes to trying another.

Do any of you have this happen?

You know what I mean?  You make something wonderful and have no idea how you'll top it, or duplicate it, or create a similar success with another piece/subject/size/technique.

Does this happen to you?  I'd love to know I'm not alone!

And so...I've spent a lot of time "recovering" (or "refreshing" or whatever one might call it)...by...working on pieced quilts.

As a result, my "On Ringo Lake" mystery from Bonnie Hunter is coming along.  I've finished the first four clues and am working on Clue #5.  As a "leader-and-ender" project I've been clearing out my "crumb bucket" and creating blocks made of bits and bobs of fabric, which will be placed with sashing into some sort of crib-sized or throw-sized quilt, thus: 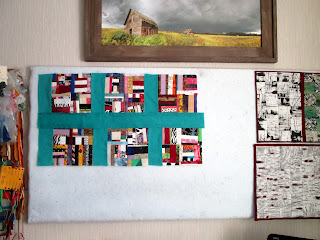 On the right, some of you will recognize "Wall" from last year.  Below it is "Scars", with its binding that needs to be hand-stitched down on the back.

I quilted and hand-stitched "Scars" when I was laid up in bed with a head cold last weekend.  (It's composed of a fabric from tree rubbing -- Mountain Ash from my back yard, known in the U.K. as 'Rowan' -- cut up and reassembled, then cut into and backed with black fabric, then quilted and hand stitched before binding.)

Yes, another way of slowing me down so that I would Keep It Simple.

I still don't know exactly what I'm going to do with those two.  They're each 12" x 12" so could go into the SAQA Benefit Auctions for this year and next (you can only enter one piece at a time)...but they're hardly Home Decor here in Bed Quilt Central!

So...There you have it.  The month is fading fast, and I'm still muddling along, trying to figure out what I should be doing.  I have a bed quilt commission that will be started this week (a (4) Rail Fence for my daughter's Air B'n'B) and along with that...more of the same, I think, until the Spirit of Simple says otherwise.

Meanwhile, I'll link up to Nina Marie's Off the Wall Friday while I still can, and leave you with Canada's Own Rick Mercer Reports and Rick's take on the Deep Freeze Festival 2018.  Enjoy!

Looks like you are keeping busy while keeping warm. It is so interesting how our thoughts about ourselves and our work can either inspire us forward or hamstring us. I am coming to the point where I look at doing 'the next thing' and it may or may not use a similar technique to an earlier piece or a new or different variation of that technique and with each one I ask - what have I learned. As long as I have an answer to that I am good. Besides - if your next creations is not stellar and give-away-able then just consider it a created fabric to be diced and sliced in a future creation. It's about having fun and feeding the soul not about being perfect or right or all those other limiting terms. Enjoy