It's peak Outdoor Studio time -- except when it gets too hot, or the thunder clouds roll in.

I've had to set aside the spinning for a bit because my 'death grip' on the fibres has given me some aches and pains (I need a better chair too, but that's another story).  Suffice to say, I wasn't practicing good spinning ergonomics and it bit me.  :-(

So...this week I played with marking and stamping, based on what I learned from Susan Purney Mark and Valerie Wilson at the SAQA WC Regional Retreat in early May.  I had fun and -- surprise, surprise -- some of it was also productive!

I wanted to see how the techniques would work on scraps of linen -- various thread counts -- that I have collected as left-overs from embroidery projects through the years.

I began with 'Asemic writing' on some 32-count, and it worked very well!


I liked it so much, in fact, that I added it to what I've done with my retreat sample, and created a dozen art cards -- now available for purchase at Gracie D's Antiques, Collectibles and Giftware here in Mirror! 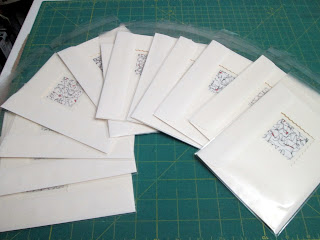 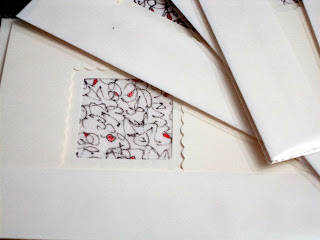 I then tried using the plastic wedge on wet linen.  Whether I did the marking, then sprayed it, or sprayed it before marking, I got mixed results.  I was using not only the black Speedball fabric paint I bought at the retreat, but also some blue Jacquard fabric paint and some green -- a Stewart Gill sample given me at a SAQA conference some time ago that was past its prime and needed water to soften it up.


Still...these ones have potential to become something (ahem!) productive...


I decided I might have more success with stamping on this fabric, and I was right -- and it was more fun, too, because the fabric didn't fight the stamps the way it fought the wedge. 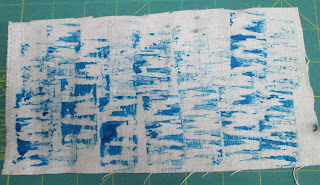 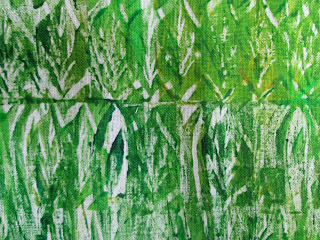 The green piece is a detail shot of a long, narrow piece of fabric (similar to the black-on-white above).  Clearly all three of these have potential to become productive!

I turned from fresh mark-making and stamping, then, to trying to make something of my retreat samples...

In the end I came up with a piece I've entitled, "Wall" -- yet to be quilted.  Even its orientation is as yet undecided!

I ended the week by finishing my long assembled Canada Day table runner -- based on a 'mystery' pattern from Quilter's Connection magazine, and done up in my favourites from Northcott Fabrics Canadian collection for Canada 150... 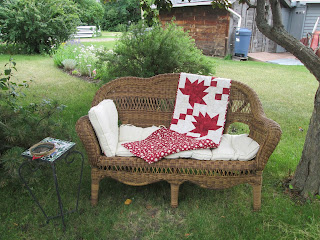 When I'd finished the binding, I used it as my banner till the thunder storm yesterday evening!

Linking this up to Nina Marie's Off the Wall Friday...and wishing all my Canadian friends and family a wonderful rest-of-the-Canada-150-holiday weekend!

I have so many bits and pieces that I just don't know what to do with, I should just cut them up and do something, but I, too, have been feeling so unsettled, even uneasy on a day-to-day basis that it's hard to concentrate. I really like your "Wall" piece, and the orientation your picture shows it at is great. Happy Canada Day a day late, our July 4th fireworks and festivities seem to be going on for four days this year with the holiday being on a Tuesday. I wish we had more to celebrate as a country, but this year I don't think so!

Gosh, I never thought of using embroidery scraps like that! They were so expensive originally that I can't bear to throw them out-lol
Pat F in Winnipeg

LOVE the mark making - especially the green piece - really so interesting Marg... keep playin wit the mark making techniques and do finish the piece you are working on piecing - love it too! AWESOME!!! So amazing what a few cut squares and rectangles can evolve into!

Hope you had a lovely Canada Day. I have some card stock. I must turn some of my bits into cards.