Order Out of Chaos


It is not the subject that makes art religious or sacrilegious, but the impulse behind it.  You sometimes get an artist who is spoken through despite his own professed atheism, because it's the creative impulse to look at the seeming chaos of the universe and then to express this chaos in terms of pattern and of order and of love and -- perhaps most important of all -- joy.

Now...I'm not an atheist (as anyone who's read this blog for some time has undoubtedly realized!)...so it's not really the first part of this reflection that captured my attention, but the last part: the part about "the creative impulse...to express...chaos in terms of pattern and of order and of love and -- perhaps most important of all -- joy."

Since I began my art practice in a serious way, I've sensed a tension between those whose creative impulse seems to express chaos...well...in terms of pattern and order...but also of fear, anger, darkness and a distinct lack of joy -- and those who include in their expression of chaos that love and joy, and...a certain light and hope.  Sometimes, yes, the former is needed to jolt viewers out of their determined complacency in the face of such chaos.  To make a point.  To inspire action.  And often times, putting those expressions "out there", sharing them with the world, can heal and restore peace and order within those creators.

But I believe that too much of it can lead to a diminished ability to see hope and light in the chaos around us.  Joy can become eroded and may even be belittled as naive and unsophisticated, in favour of cynicism and pessimism.

My 'statement' pieces and participation in such projects as Threads of Resistance and the Social Justice Sewing Academy have come about because I felt compelled by the issues at hand -- and I've learned a great deal from those experiences, from making that work. 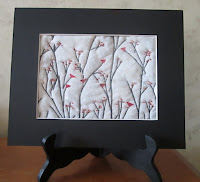 But I can't live there.  I cannot dwell in the realm of despair, righteous anger, ongoing fear and anxiety.  Even as I resist the dull, grey wintry days with injections of "those little birds", I resist the temptation to be drawn into a permanent home in the sturm und drang of current events...

And so I find myself returning to colourful piecing and to making more of those little canvases of which I am becoming particularly fond.

Here's my latest offering...finished on Monday of this week...the first in my "Inspired by Scotland" series. (And yes, it will be put in a 'floater' frame...like this one.)


The fun of this came at the end when I actually followed a "what if...?" to its conclusion (instead of ignoring it or dismissing it as silly or impractical)...


There will be more of these -- and some in other sizes (though not, I expect, larger than 12" x 12").  But these take time.  Despite the myriad of photos from my trip and the ideas swirling about within me like those misty clouds swirling on those hills, the ideas take a while to coalesce, a while for me to figure out how I want to express the loveliness, the light and the joy of being in a beautiful landscape -- whether it is in a far-off land or outside my own back door.

So, Gentle Readers, I leave you with my answer to Nina Marie's question this week, even as I'm linking up with her Off the Wall Friday.   She's written about 'creativity exercises' and wondered aloud what sort of 'calisthenics' her readers might practice when feeling 'creatively challenged'.

My challenge, creatively, is of having too many ideas pulling at me all at once, without a clear way to sort them and get them out into the world.  My 'creative calisthenics' in this in this case is more akin to stretching, rather than jumping jacks!  As I mentioned in my last post, when I find myself 'tectchy' and at loose ends, in between specific projects, or 'coming down' from a major project (like this), I often turn to piecing and/or fabric cutting, or re-organizing my sewdio.  Creating order and pattern out of the chaos of fabric and scraps enables me to bring order to the swirling thoughts in my mind while bringing colour, light and joy to my world.

May your weekend be full of that same colour, light, love and joy.

Ohhhh I love this post! As you know I'm not the most cerebral artist and tend to be a bit pragmatic about it all, but I can tell you that I definitely don't use my art to express the darker aspects of this world that annoy me. Normally, for me its about putting together something of beauty or interest or when I'm lucky - both. Someone once accused me of being shallow and just playing at being an artist because of this attitude. I looked at her and said - you obviously aren't having enough fun and walked away. I can't tell you how greatly honored I am that you answered my post with yours. It truly made my day!

Difficult times require softening with beauty. You have a knack for this.

What a beautiful landscape - the misty-ness of it takes my breath away.

And re: joy - here is a quote from When Women Were Birds by Terry Tempest Williams that caused me to really think more about joy and what it might mean.

"Once upon a time, when women were birds, there was the simple understanding that to sing at dawn and to sing at dusk was to heal the world through joy. The birds still remember what we have forgotten, that the world is meant to be celebrated." xo

Over time, I have come to the place where creating something is in response to an urgent demand from deep down, something that calls to be expressed, generally in response to some tiny miracle I have noticed - the world in a dew drop, a collection of gulls, the light at a particular moment - I am draw to invest the time, energy, contemplation and celebration to give it form. The joy does not come in the creating, although there can be excitement, but when looking at the finished piece and being aware of the slow, quiet smile and accompanying whole body warmth that signals a thing well expressed.

I feel that we create what we focus on - so while creating something to express/ process/ question a disappointment, fear, annoyance, frustration or sadness is effective in helping me to process whatever, I tend to be inspired to take action by the little miracles about me - the things that make me want to say - " hey, look at this? Did you see it? ". Thus I focus on the wonder of this world and it opens up even more to share more miracles with me daily. Maybe that is my way of helping and supporting this world around us - who can say.