SAQA Western Canada's first Regional Retreat has dominated my posts for the last few weeks -- when I've managed to post at all.  The paucity of posts arose from a variety of reasons, including the demands of yard and garden, as well as a late spring head cold (for which I mainly blame the unseasonably hot weather's triggering the automatic air conditioning to cool down the innards of my new car with a blast until the pre-set temp (19.5 C) was reached.  I now keep the AC off and roll down the windows instead!)

But I have been creating in the Sewdio -- really I have!  And here are some examples -- in addition to "Agnes Meets Judy", about which I've already posted.  :-)

First, two "birdie" commissions that arose from the Lacombe Art Show & Sale near the end of April:


Next, another commission of the quilty variety, but something completely different, and just a hair outside my comfort zone: binding an "Apple Core" quilt, which means bias binding around scalloped edges.

The quilt is one of a couple owned by my client, who inherited them after her grandmother's death...about 40 years ago.  She'd kept them in a drawer, so they are in pristine condition.  She also told me that the pieces were made from fabric originally used in home sewing projects, such as house dresses, other dresses and aprons.  The fabric is clearly 1930's type:

Though my client and I worked together to estimate the amount of fabric she'd need to buy for the binding she wanted (1/2" visible on both the front and the back), and though we used formulae found over the Internet at the time...well...it turned out that the 1 metre she bought was more than enough!

The preparation of the binding -- which I did 'all-of-a-piece' using instructions from my trusty Quilter's Ultimate Visual Guide -- turned out to be the most intimidating part of the process.  Once it was finished, though, pinning it and applying it by machine -- mitred corners and all! -- was much easier than I thought it would be. 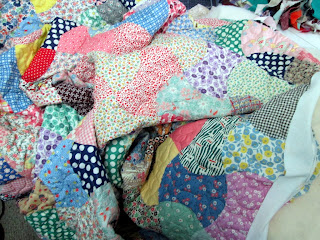 Next I had to trim the excess batting and backing, left behind by the long-armer when the top was quilted: 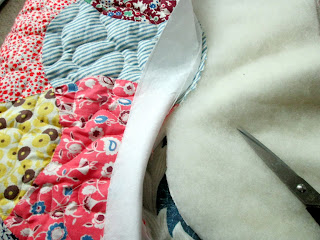 Then, more pinning and a few hours of quiet hand-stitching, et voila! 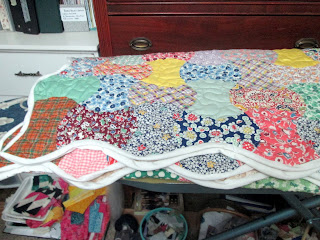 In addition to paying me, I'm rather hoping that my client will let me keep the trimmed backing and batting.  While the latter is rather 'poofy', the extra fabric could prove handy for backing future small projects -- especially minis!

As for that excess bias binding -- well, the client has another (slightly smaller) "Apple Core" that needs it, and "would [I] do the job?"  Sure!  After all, the tough part is behind me!

In the way of art work -- besides "Agnes Meets Judy" -- I've taken what I learned from Susan Purney Mark at the retreat and turned some samples into note cards: 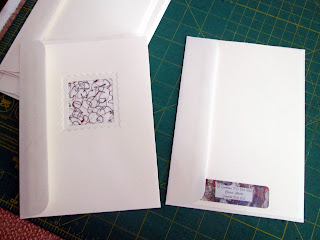 I bought the blank cards eons ago, knowing someday I'd do something with them.  Now I've finished five using squares of the 'asemic writing' to which Susan introduced us as part of her 'mark-making' workshop, embellished with a touch of colour.  This week the clear plastic envelopes and labels I ordered especially for the back of each card arrived, meaning now I can go ahead and play some more with my fabric samples -- and make new ones.

I plan to take a batch down the street to Gracie D's to offer them in her antiques/gifts/collectibles shop...and may take a few more to Different Strokes gallery in Olds when I drop in there in a couple of weeks.  I'm thinking that both Gracie and Deb might think they're a fit for their shops.

I'll leave you with "before" and "after" photos of the yard work that's kept me out of the sewdio for the past 10 days or so -- an aged rock garden that's in my front yard.  Grass had encroached more than ever this spring, and there was a great deal of winter kill of the flax and other perennial ground cover, so I decided it was time to dig that stuff out: 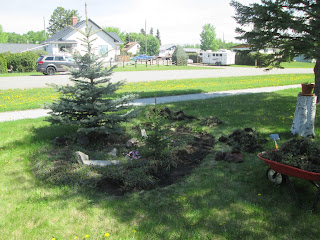 In the process I took out all of the rocks.  These are but a few... 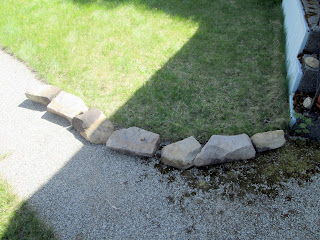 Finally the bed was clean and ready for fresh planting! 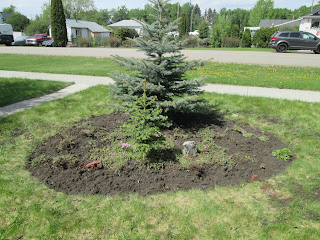 And here it is...complete with topsoil to build up the "holes" left by the removal of sod, new plants -- including a few annuals (marigolds) just because, weed barrier (no more grass and dandelions etc.! -- I hope!), and fragrant bark chips... 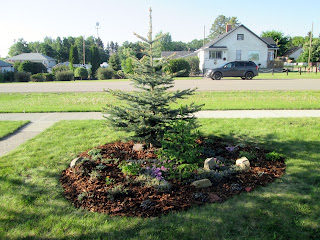 Now that I've caught you up with my corner of the world, Gentle Readers, I'm off to the Edmonton Festival of Quilts...and linking up with Nina Marie's Off the Wall Friday.

So glad to read your blog again. Love your yard and all your work in your studio, particularly the notecards!

Congratulations on the multiple commissions. Those cardinal minis are a favorite of mine. I lovely the simplicity of them.

Congratulations on multiple commissions, Margaret. I'm not surprised you are receiving requests for cardinals in the snow mini. They are stunning.

What a treasure the apple core quilt is! I'm glad the owner appreciates it and hopefully she will use it. Quilts like that one are better being used and loved.

Binding that quilt was quite an accomplishment. I would much rather have too much binding, than too little. Glad there is a use for the leftover.

Your commissioned pieces are very cute, and I love the names.

Have a nice time at the show.

The apple core quilt reminded me of some of the research information I gathered for a course I did some years ago. It focused on the history of commercial dyes and how the colours and patterns shifted as new dye technologies came to the fore. This quilt is a perfect example of what was available in the '30s. Interesting to think how things have changed.