It's taken me by surprise that a full 2 weeks have passed since I posted Part II of this SAQA Western Canada Retreat synopsis...but there you are.  Between work at The Shop, a trip to Edmonton, three commissions to finish, the call of the yard and garden, and a spring head cold, I've had little time and even less energy to apply to writing...and this is a long post, for there's lots to cover.

Saturday, May 6 was the second full day of the retreat -- and its focus was creativity and play.

Most of the morning featured a session on colour and design, guided by artist Judy Villet of New Westminster, B.C.  Fast-paced yet thorough, Judy packed a great deal of information into the short time she had with us -- including great exercises to test our abilities to discern tints, tones and shades.

You'll see below what I mean when I describe Judy's teaching style as dynamic: I tried four times to capture her...but she proved too quick for my wee point-and-click!  ;-) 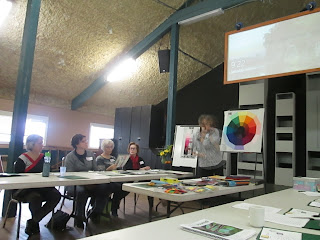 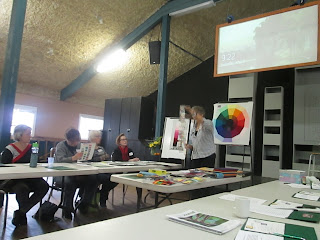 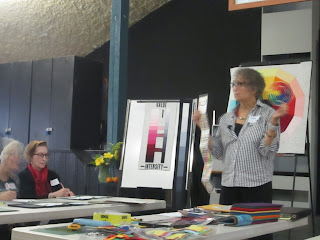 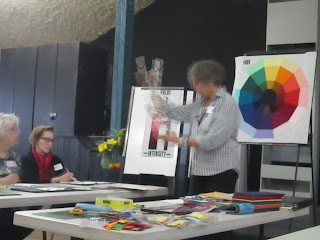 The last of the morning was a presentation on photographing our quilts from SAQA WC Co-Rep (MB/SK), Valerie Wilson.  Now...I've already told you I use a "point-and-click" camera -- and that's the extent of my enthusiasm for the subject!  I've managed to take reasonable photos on which to base my landscape work, but for important submissions, I rely on the skills of my daughter, who has studied the subject, had photos published in calendars and books, and has had some success selling her work.

Nonetheless, though I was fully prepared to be bored by this session (reading my camera manual puts me to sleep)...Valerie surprised me, and I confess she left me with several nuggets to take home and try out.  Thanks, Val!  :-)

After lunch we broke into three groups that rotated through as many creative stations -- for some hand-on play.

Janet Scruggs taught us her "Scorched!" technique that uses lemon juice mixtures and a hot iron to produce interesting designs, whether applied over stencils, used to colour in shapes, applied over shibori-style folds or created free-form.  I'd been anxious to learn this ever since I'd seen examples of Janet's work using this technique at an exhibit in Calgary last year. 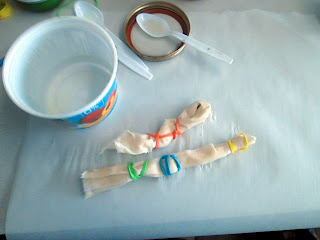 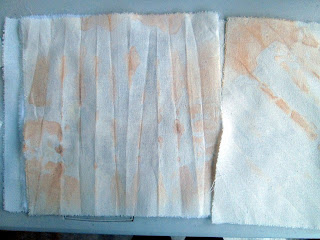 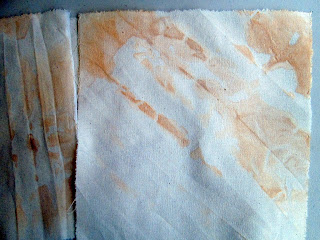 Next, some painting.
A picture was laid underneath and I 'traced' it with the solution: 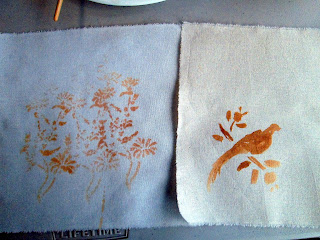 And finally, my favourite:
a thickened solution (using sodium alginate) with a stencil.

Next, I moved to the session taught by Susan Purney Mark, on "mark-making".  She's posted a few times about this on her Facebook page...but here are some of my samples...


Then...one of my favourites...applying the paint to wet linen, with the wedge.  I love the softened edges and the irregularity of this.  I have lots of pieces of scrap linen off-cuts from embroidery, and plan to play some more with this! 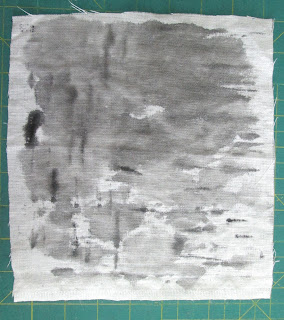 And my other favourite: 'asemic writing' -- essentially meaningless shapes that appear to be writing but make no actual letters or sense -- using a fabric pen on a densely-woven cotton: 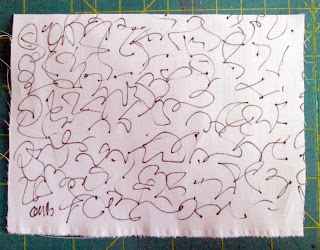 I've already cut up most of the piece of asemic writing that I created, and am applying it to card-stock...stay tuned for the reveal...

Last but not least was a session with Valerie Wilson on creating and using stamps.  Another one that filled me with reticence...as years ago I'd taken a similar session and found that trying to carve a stamp was very hard on my hands, and not at all worth the effort.

Again...Valerie surprised me!  I managed to make three stamps, all of which I really like and may use in future (especially the larger one, in which I tried to emulate wavy grass).  So here are the results:

First, the grass stamp and the leaf -- the latter being made out of a small eraser:

Next, remember the mixed results I got with the 'scorched' shibori-style folding (above)?  Well...I took this piece and stamped over it with the third stamp, which I'd carved to emulate either ripples on water or bark on birch/aspen...and I think it makes a rather interesting textured piece, don't you? 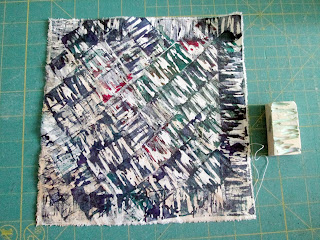 After expending all this creative energy, it was time for dinner -- followed by a wee bit o' hospitality (read: wine and cheese!) and fabric fondling at the home of Coleen Adderley, (now former) SAQA WC B.C. Co-Rep and Retreat Coordinator!

We all bundled into the several vehicles available and were up, up and away (literally!  She lives on the side of a cliff!) to her home in Peachland, which is also home to her new business, Quilted Reflections. 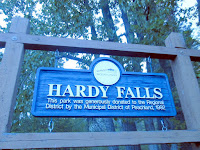 On the way, Coleen indulged me for a short side-trip to the far end of Peachland, site of Antler Beach, Hardy Falls and the Edgewater Pines Trailer Court.  The latter was the home of my parents from 1978 through 1994...and the visit brought back many memories of visits there -- mainly in the summer -- with the kids.  The last visit we made was in the summer of 1993, and though a great deal has changed since then, it would appear that my parents' place is still there; I was certain I was able to pick it out as we drove slowly by.


And the group had no trouble finding items to take home... 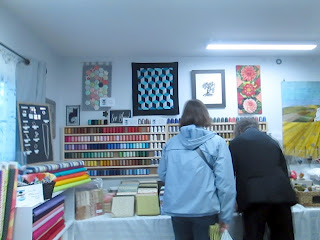 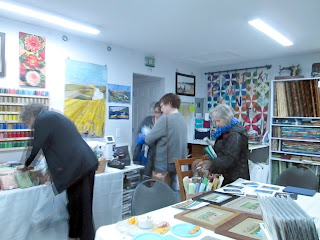 Coleen also place several examples of her work around the shop, including this beautiful surprise behind the entrance! 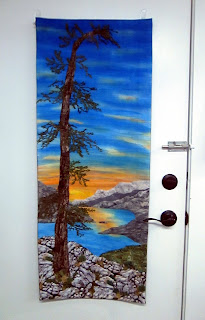 A great time was had by all, and the wine and conversation continued long into the evening, even after we'd returned to the lodge.

And on Sunday...it was home-time.  After breakfast there was a 'brain-storming' session about what is next for the Region, which, come July, will be bereft of SAQA Representatives unless people step up to the plate.  Ah, Gentle Readers, 'twere ever thus!  Organizations that thrive on volunteers are always on the look-out for folks with a passion to support their mission, at various levels...and SAQA is no different...

Here is where I wind up the story of our first-ever SAQA Western Canada Regional Retreat...with the hopes that the organization will continue to thrive in this part of the country, and the excitement of knowing that the first-ever International Conference to be held outside the U.S. will be in Toronto in 2020.  You can be I'm hoping to be on board!

What a wonderful regional conference you had! Amazing teachers/facilitators!

I love the work you produced. Our new regional rep Maggie Vanderwiet is trying to get pods happening in our region. Central Canada.

So far she is doing an amazing job.

While I hate being on committees ....I love helping and being given jobs to do. I just hate meetings...

I can see where involvement engages you and can make one more inspired. A community!