Not far away...just Camrose, Lacombe and Calgary...but away nonetheless. It feels like longer than 10 days since my last post, because the days have been rich and full.

After Easter, I put the finishing touches on all I needed to do to prepare for two back-to-back events.

The first -- April 19 -- was the Trunk Show I presented to the Battle River Quilters' Guild in Camrose, about 45 minutes' drive north of here.  I'd never done a trunk show before...and while I'm used to public speaking, I have to admit I was rather nervous!  The members made me feel welcome though, and overall I was pleased with the response to my work.  Here are some photos they took of me during the presentation...

The last two (above) took them rather by surprise, I think.  "Sometimes" brought my first ever experience of hearing viewers pause and then say, "oooooh!"  A bit overwhelming, that!  As for "MOB I" -- well, there were two members who have adult children with Type 1 Diabetes, so that one was cause for much discussion after the presentation.

It was a long drive home and a somewhat sleepless night -- as I was wound up like a top! -- but I had work at The Shop the next day.  Blessedly I slept soundly on Thursday night, because I had an early morning Friday, setting up for my booth at the 18th Annual Lacombe Art Show and Sale!


This year my booth was very 'open' in that I was right inside the main doors, and backed onto a corner that both I and my neighbour, Gordon Hiebert, used for storage and packaging pieces.  I nearly forgot to take a photo of the booth at all, so here it is on Saturday a.m. -- ready for the second day of the two-day show: 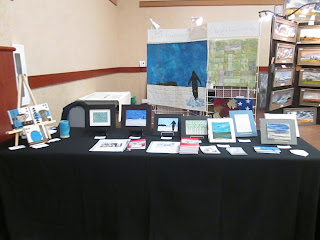 You can see Gordon's work in the background on the right.  He's a photographer who's known for following the weather patterns and getting great shots of prairie and old buildings and vehicles, with wonderful clouds and skies and so forth.  I came home with one of his pieces for my studio: an old shed out by Winfield, AB.

In fact, I came home with a few pieces of others' art.  I'm a great believer in "art for art".  That is, when I sell something at the show, I like to go out and buy something from someone else who's selling there.  This year, I had a windfall...


"Sometimes..." sold at the opening bell.

I bought a hand-dyed silk scarf from designer Maxine Whitehead of Eckville, AB.

I bought two large silver rings -- one with jasper (a black and white polished stone) and one with larimar (an aqua-coloured polished stone) -- from Joanne Belicki, whom I befriended and hope to see again.

I bought that photo from Gordon (above).

I bought a mug from featured artist, potter Arne Handley of Medicine Hat, and parked it next to my "Mug Shots" (see the photo of my booth, above, on the left side!)

I bought a small pewter bowl with a "Scottish" (Glasgow) rose at its heart, for which I've longed for three years now...created by Scots-Canadian artist Louise McBeath Schoepp and her husband, Al Schoepp of Innovative Artisans.  We had a good chat about my up-coming trip to Scotland...so if I see her next year I'll have lots to share!  (Note: they also sell at Siding 14 Gallery in Ponoka, AB, where I showed my work for a brief time in 2015, and have exhibited at Different Strokes Gallery in Olds, AB as well...)

It was most rewarding to meet the young recipient of "Sometimes", whom I guessed to be in her twenties.  Her mother bought it for her.  "Mom" was one of the show volunteers and "Daughter" works at the library down the hall in the same building.  "Daughter" had been in the ballroom where the show was being held, with "Mom", as we were setting up and she'd seen the piece and was, "Mom" told me later, swept away by it.  "Mom" then bought it as a surprise and had me keep it up until late Saturday when they came to fetch it -- a delightful, touching time to say the least.

And yet at the end of the weekend, on my way to Calgary on Sunday afternoon for visits and appointments (in the snow, but I won't go there!)...I had mixed feelings.

This piece hung over my bed from the time it was finished, so I could take decent photos of it to enter into two major juried shows.  One of those shows was cancelled for lack of entries; the other didn't have room for the piece.  People told me that there was a reason...I was meant to sell it to that family, for that young woman to enjoy.

It was fairly priced (I'd done some research) but still far more than most attendees at that particular venue would ever think of paying (based on my four prior years there).  I showed it just to show them what I could do, never thinking it would actually sell in that place at this time.

And for the rest of the show, I sold only 6 more pieces.  And, well, yes...I have two more orders for the "little bird" pieces...

In monetary terms, I did very well -- better than I've ever done before (this was my fifth time in that show/sale).

Perhaps I've become so accustomed to the "little pieces" being successful that I wasn't prepared for this.

I just sense that in the joy there is a kernel of disappointment, unmet expectations.  I can't put my finger on it, and it seems so foolish.

Every piece I make is unique -- even after I've made multiples (like the "little bird" pieces) of what could be construed as "the same" by the undiscerning eye.  I can never make another "Sometimes..."

So...today I entered three pieces into a Call for Entry entitled "Threads of Resistance" based out of the U.S. -- a project founded by a group of artists, some of whom I know and have met.  The deadline is May 1 so I expect to know in short order whether or not they've been accepted.

"Disintegration" is a series on deteriorating civility that I've been working on for some years now, based on a book by Dr. P.M. Forni entitled "Choosing Civility: Twenty-five Rules of Considerate Conduct" (St. Martin's Griffin, New York, 2003), which I read even longer ago.  I meant it as a triptych, but each piece can stand on its own.

This has been a long post, and today, a long day, so I will leave their story for another post.

And so I leave you for a quiet evening of knitting, and preparation for work at The Shop tomorrow.  I'm linking this to WIP Wednesday over at The Needle and Thread Network, and hope to hear some of your thoughts...

Have a lovely rest of the week!

What a wonderful trip, Margaret. Missed your posts and glad to hear about all your news. Hope your entries in Threads of Resistance are accepted.

Thanks for sharing your journey... congratulations on the sales, especially of "Sometimes...". The young woman is indeed fortunate to have the beautiful work. It is interesting how things work out in the end, despite all the planning we attempt to do!

I am glad that "Sometimes" is going to a home where it will be appreciated. It is a striking piece.

Margaret, you hsve done well. Luv that lanscape. How cool to reinvest in the art community. What a blessing ypu are. I'm off to mini retreat. I hope to return with the nlessing of spring. Enough white stuff!

Congratulations on such a successful show. Selling a major piece is a wonderful accomplishment and because of what you've invested in it (emotionally) the feelings about the sale are complicated. You've expressed it very well though.