I spent Monday assembling my first-ever Proper Proposal to an Art Gallery -- i.e., an Exhibit Description/Proposal for the Art Gallery of St. Albert near Edmonton, for Mark on the Body to appear there in 2018.  While I have two more of these to do, this one had a deadline (March 14)...and a timeline that says the Gallery will respond to all applicants by June 3, 2017.  In other words, "Hurry up and wait"!  :-)   The good news is that I had it in the mail on Wednesday, the postage to send it with tracking was reasonable, and it was delivered in St. Albert on Friday.

Next up: the McMullen Gallery, which is part of the University of Alberta Hospital Complex in Edmonton -- a key place for me to show this work, as that's where many of the latest advances in research about Type 1 Diabetes -- its causes, treatment, prevention and cure -- have been made, and where that important work continues.  Deadline for 2018 submissions: March 31.

And last but not least, the Southern Alberta Art Gallery in Lethbridge -- 'way down in the south of the province -- it's a five-hour drive compared to two hours for those other galleries.  There's no deadline for this submission; the SAAG accepts proposals on an ongoing basis -- thank goodness!

The other hard slogging (!) came in the form of paper play with Lyric Kinard in her "Abstract-a-licious" online class.  I'd fallen behind a bit in the exercises since I last reported, and with the course now half over, realized I had to get going or I'd miss out!

In Exercise 2 -- entitled "The Borrowers" -- we were instructed to riff off one (or more) of the paintings offered which had been altered to grey-scale.  I chose Van Gogh's "Starry Night", which appears below in colour:

There were several tracings involved -- identifying background shapes, the largest shapes, groups of shapes and that sort of thing.  I came up with a few images...


Having chosen one of the paintings and traced its shapes, we were now challenged to "make it our own", again using tracings that we'd change a bit at a time till something new was created.  Here's my final composition, on paper:


Then we were asked to add colour -- playing once more with the colour wheel. 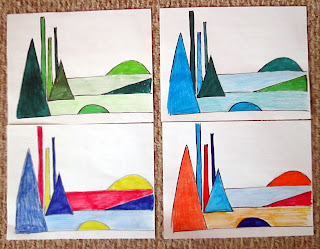 Again, no surprise -- I began with a monochromatic scheme in greens (upper left), moved to an analogous scheme of greens, blues and blue-greens (upper right), then as suggested, tried a 'triad' in primary colours (lower left) and finally a complementary scheme in blues and oranges (lower right).

I like all but the one in primary colours; my favourites, though, are the monochromatic and the complementary schemes: the former, because it is so close to what I see around me (when it's not winter!!) and the latter, because it strikes me as other-worldly somehow.  I'm thinking about replicating these in fabric, and depending on how it goes, might actually break down and do all four...as minis.

Exercise 3 required doodling -- something I've not done for a good fifty years and which has been exploited of late by folks making money by selling instructional books, special pens and special papers for it, putting me off entirely!  I was comforted to encounter kindred spirits in this class, for whom 'doodling' was the last thing they wanted to do.  That was a revelation to me, because everywhere I look it seems that folks have been smitten by it as a stress-release.  It did that for me when I used to chat on the phone in my teens, doodling away with my free hand, decorating my mother's grocery list.  Now I neither enjoy doodling, nor being on the phone except to very special individuals on very periodic occasions.  For stress release, I knit!

But enough of that.  I slogged away, dutiful student that I am, and made a few doodles.  I figured to make them true doodles, I needed to go back to the tools I used as a kid: a message pad (this one was about 3.5" x 8") and a ball point pen with a propensity for blotting!


Next: add some patterning, first with a pen.  I outlined the ball-point with my favourite Pitt Pen "brush tip" in black, and went to town.  While I can't see doing this regularly (it got rather boring), it was fun for the time it took.


Continuing with the theme of patterns, we were asked to take one of the doodles, and layer underneath it a batch of papers that contained black-and-white photos of patterns.  We were to cut out the shapes we saw in the doodles, mix them up and reassemble them with tape.

Now, I've never been good with paper and tape.  I get all caught up in the tape; it sticks to me, to itself and to the paper in places where I don't want it to stick.  Here are my sad and sorry combinations.  I managed only two samples and threw the other pieces into the recycle bin! 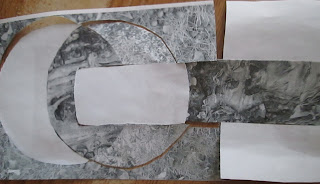 The one thing I learned (besides the reminder of why I never play with paper and tape, and use gift bags where possible) was that either my patterns were too similar or there was just too much pattern in the top sample, rather like the fabric block I made from large prints in my Craftsy class a few weeks back...


One last exploration remained in this lesson: positive and negative space.  Cut out one of the doodles that had been done on white paper, and play with it against a patterned background.

This was tricky, because the paper bounced around on itself, and I was determined not to use any tape for fear of getting tangled...but still, I persisted: 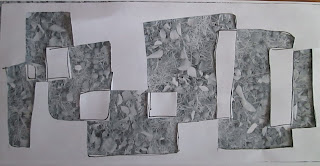 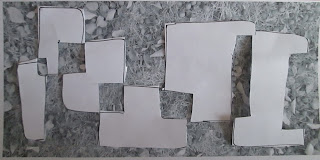 The underlying pattern is a grey-scale photo adapted from a coloured original that I'd taken of berries and leaves on the grass in autumn.  While I didn't enjoy the process (too fiddly), I did rather like the results.  That said, all the bits joined the others in the recycling bin shortly after this photo was taken!   :-)

There was one last exercise to do before I was fully caught up.  Exercise 4 -- "Reality Warps" -- involved tracing a pair of scissors (that is, a real object that is pretty easy to trace) and manipulating the tracing, adding to and/or subtracting from it, altering it...creating an entirely new image or motif to use as a springboard for a larger piece.

I chose my kitchen scissors which I use for picking lettuce and herbs in the garden, etc.


As I reported when I posted in the 'classroom':


I found this tricky.  I kept getting distracted by the **entire** shape being traced, and found it hard to isolate parts so I could either re-trace or alter them.  Still, I persisted.  The following is a series of 3 photos showing the original scissors (I chose my kitchen scissors because they seemed the most interesting) and two variations on the theme.  First, "original" plus #2 and #3...I rather liked #3 -- especially the "floral" centre.


And my report in the 'classroom':


...For these, I started again and created a riff off the original (top/centre right); from there I created the tracing I like best (#8).  Again, I was drawn to create something floral...or maybe it's an attempt to depict the "Star in the East" that hung over the stable in Bethlehem...who knows?!


The last section of Exercise 4 had us taking 'elbows' and cropping some of the above doodles, scribbles, and tracings, as well as the chosen sample painting(s) we'd borrowed from the masters...in order to come up with "New View(s)" for further creating and abstracting.

For example...from my explorations into "Starry Night" -- a few items with potential, especially (or so I think) for hand-stitch: 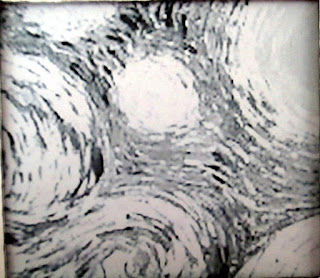 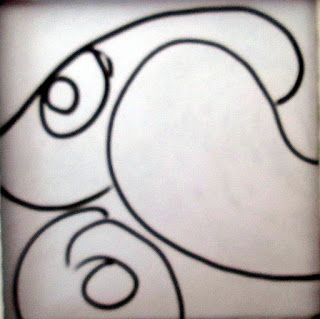 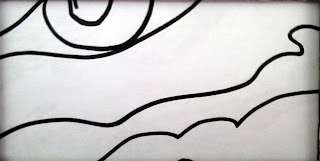 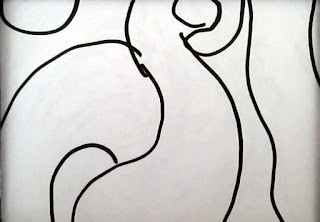 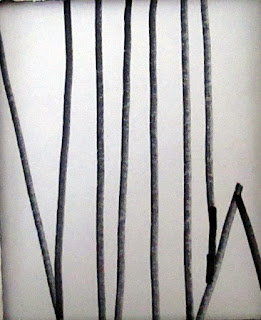 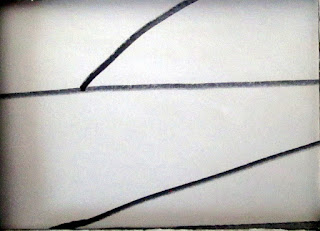 I've yet to translate these into anything, but I think there's definitely some potential for developing these.

You can bet, however, that I'll be doing it with fabric and pins on my design wall, not with paper and tape!

Now, having been snowed in (again), I'm off to do some shovelling.  Once I return, I'm pouring a cuppa and heading off to Nina Marie's Off the Wall Friday, where this week, she too has been playing with her cropper!

Have a great rest of the weekend!
Posted by Margaret at 11:03 am

You have been busy!
I took an online class from Lyric once and found I could not keep up with it in my busy life at the time. I start with good intentions.
I am not a good producer with on line classes. I need more discipline!
I admire how you can do the work...
You have some interesting pieces to develop. I look forward to seeing them.