I find I'm restless and unsettled these days.  Likely, it's due in part to the fact I'm paying far too much attention to what's happening (or not happening) Down South.

Then there have been a couple of recent deaths locally -- or connected locally -- young people in late teens and early twenties, one by her own hand.

Our priest is retiring at the end of this month and there's no one in sight to replace her -- at least, not that I know of.  Our Parish needs to update it's profile, discern changing needs, that sort of thing, before it will be ready to consider applicants for the post.

I continue to wait of news about the two exhibit entries I've put out...

And the weather is turning at last...longer days but very windy; snow is unpredictable, as is ice, on the roads.

Topping that is my online studying which is challenging my late-developing Artist's Brain to stretch and move in very different directions.

I feel like I've been hired to take charge of a 'herd' of cats!

There are some finishes and near-finishes to be pleased about.  The little dress I made for Baby Adina (who turns 1 year today) is in the mail.  Alas...I've discovered that while I thought about taking a photo of it -- I actually didn't.  :-(

The cowl I'm making for a shop sample is more than 1/2 done and will be finished tomorrow at The Shop.

Gina's Harry Potter House Socks are proceeding apace -- I'm well down the leg of the second sock of the pair...and

I've just sent off another $163 and change -- divided equally -- to the JDRF and Diabetes Canada (formerly the Canadian Diabetes Association) from sales of Mark on the Body (see the link in the side-bar for an online preview if you like.)  That brings the total so far to very close to $620 -- for which I am truly thankful!

And...there are some up-coming exhibit opportunities...such as the invitation from a quilt guild in Camrose to do a talk and trunk show at their meeting in mid-April, and a possibility of reprising that talk for the LQS in Stettler in June...

I got the "Windows" piece sewn together and tried it on with EB over at the Academy of Quilting -- with four different rotations.  Can you guess which one she liked best?  ;-) 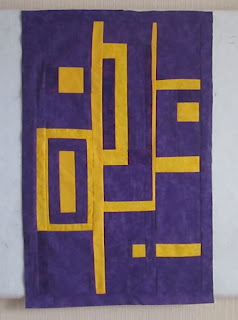 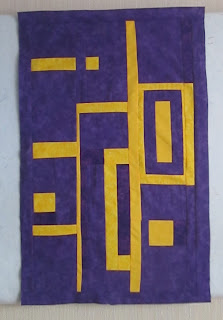 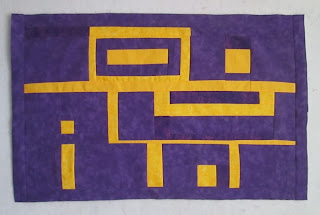 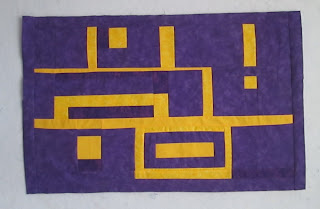 And...I've been working away in Lyric's "Abstract-a-licious" class, turning those thumbnails into colour and then into a motif I could translate to fabric.

First, my favourite motif (the one on the far left HERE), in colour -- two complimentary colours plus 'white', but done with differing values in coloured marker and crayon: 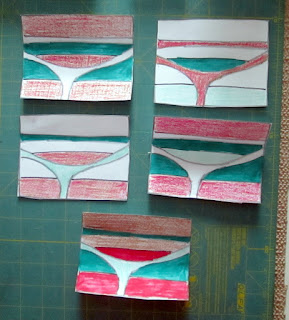 My favourite of these is the top left one -- here's a close-up: 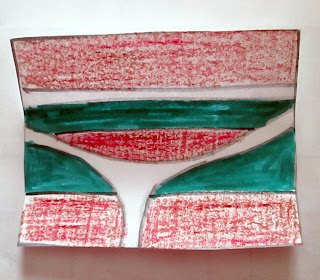 Lyric liked the one on the very bottom, but it was too close to "Christmas colours" for me!

Today I began to work on this as a piece in fabric -- quite a good size, really...aiming for about 16" x 20" finished.  First, I pieced the background (with the sample on paper inset): 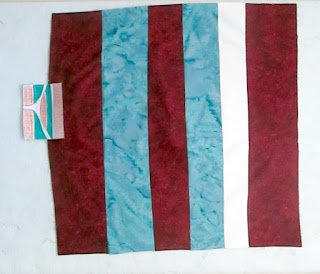 Then I took aim at the white, curvy overlay.  I decided that rather than fuse it, I would needle-turn it...but first I had to draw it out.  I cut a piece of white Kona cotton about the same size as the back ground fabric, and laid it over top of said background on the design wall.  Then...I literally took a mechanical pencil and drew the shape, matching the beginnings and endings of each curve with the stripes of the background, just as it was in the sample...but adding a bit extra fabric for turning under.

Then I tried it on in two different orientations...

Believe it or not, I'm kinda favouring the second one...

While you ponder that, and get back to me, I'm linking up with WIP Wednesday on the Needle and Thread Network, and preparing to drive into town for the Ash Wednesday Service.  Maybe that will help me herd some of those cats!

Re: "Windows" I like the 1st orientation--something solid and stable about it with that box on the lower left side, I think--as well as the 4th. in the 4th orientation, it looks like there's an exclamation point, which catches the eye.

Yes, the first for me too.

For no good reason that I can explain I like the third rotation on the windows piece. It reminds me of a printed circuit board, which shows my inherent nerdiness.

I like the second of your Window pieces, and the second one of your white curves (the reverse one).
I know what you mean about that unsettled feeling, I'm suffering from it a bit too, but unlike you I haven't got round to working out why I feel that way. I have an inkling that I'm just waiting for spring!! Anyway I hope you find a solution (and maybe you'll let me know what it is if you do).
Happy stitching. X

You are dping really well. I like the thitd one. I would have needle turned as well. Good stuff.

I've always heard its a good abstract composition when it can be enjoyed in more than one orientation. That said, I like more than on but my favorite is #3.