Sometimes You Can Walk on Water

On New Year's Day, my daughter posted another stupendous photograph on her blog.  I was immediately smitten.  I could see it in fabric.  I asked for -- and received -- her assent to use the photo, even when entering the piece into a show.

Well, the Ailsa Craig Quilt Festival in Ontario this year is focusing on Canada -- because of our 150th Anniversary of Confederation (and 150+ as an entity, if you go back far enough with our First Nations founders)...


Goodness!  I have nothing on hand that's large enough; I've only twice made any art piece that large (or larger) and those pieces are in private hands (not mine).

And there's this wonderful photo:

Monday I awoke in the wee hours with it on my mind.  I'd have to dye the sky; did I have a large enough piece of white fabric?

I found a very large piece of heavy cotton -- rather like duck -- that Gina had given me some time ago.  I think it was a blind from IKEA in another life.  I cut it in half, put it to soak in a soda ash solution and went back to bed.

When I got up I put it into a low-water immersion dye bucket with "Sky Blue" dye solution (Dharma Trading, MX dye) and left it till the evening.  Rinsed, washed with Synthropol and machine dried, it looked pretty good.

Tuesday I worked at the shop.

I woke this morning knowing it wasn't quite the right blue.  I'd have to over-dye it with some turquoise...so back it went into a new soda ash soak and then the dye pot for a few hours. 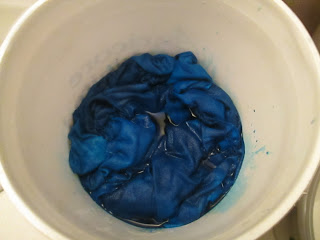 While it soaked, I worked on plans for my next donation to the now-annual Spotlight Silent Auction at the up-coming SAQA Conference in Lincoln, NE at the end of April.  I'm not going but I can still contribute.  I decided to make a mini of the piece I'm entering into Ailsa Craig...so I prepped the background and chose thread with which to quilt the sky: 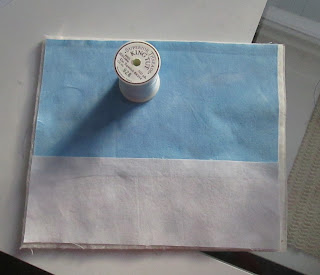 I also did a bunch of paperwork and took a walk to the Post Office...Not long after lunch, I decided to take the fabric out of the dye pot, rinse, wash and dry it...and then...mount it on the design wall. 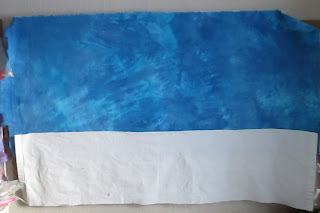 Miracle of miracles, I found some thread in the right colour for the sky, and will do a practice run on some of the fabric that I'll trim off one side.  I'm a bit concerned because it's heavier than quilting cotton.  I might keep it simple and use my walking foot for wavy lines and large swirls.

I also knew I'd have to enlarge the figure and the island/shoreline in the background.  This took some work with my light box and my scanner/copier, which blessedly enlarges up to 400% -- and I used every bit of that!  After several attempts, I got the entire figure together, and the island/trees...for this mock-up:

Of course, the figure and the island/shore won't be white... Just in case you were wondering...!  ;-)

Even if it's not accepted into the show, I'm thinking that if I can get the quilting right, it's going to be a wonderful piece!

So...that's my Work In Progress this week, which I'm linking up to WIP Wednesday over at The Needle and Thread Network.  Time to take a break and do some knitting!

What a beautiful picture. Your sky came out wonderful. Looking forward to the whole piece.

I am excited to see how this one all comes together. There is something special about those pieces that our Muse shows to us whole. Have fun in its creation.

Love this progression story, Marg... and your commitment. Your daughter must be loving that she can contribute to your joy in stitch and creativity! I am!
bethany

It's a wonderful photo and, even if not accepted, a piece that will be worth doing. I can't wait to see how you finish it.

Wonderful photo and discription of how a project can take over your thoughts. Can't wait for Canada Sea to Sea to Sea.

I agree its going to be a wonderful piece. Its so cool that you are using Gina's photo as inspiration. Can't wait to see the finished piece. BTW I love how the sky fabric turned out.