Time for a Breather!

The first few hours were spent attaching the 'snow' to the 'sky' -- for real! -- and preparing the entire thing for quilting.  I decided to pin it as I was concerned that spray baste (my basting "process" of choice) would be a challenge with this heavy fabric.

I chose a batik for the backing -- largely because it was one I'd bought to emulate "snow" and never used.  It occurred to me too, though, that the dense weave of a batik could support the heavy cotton of the top better than an 'ordinary' cotton.

Then came testing re: the quilting.  I wanted to do free-motion, especially for the sky.  I tried it out for a couple of hours...with no luck whatsoever.

Well...the colour of thread I had on hand was found on a spool of Superior's "New Brytes" (a line designed in association with Caryl Bryer Fallert Gentry) that I'd received as part of one of the company's "Try Me" specials.  It's a 30-weight polyester.

I wanted to do free-motion in the sky, a bit more densely than I usually do, following some of the dye patterns.

I cleaned the bobbin case and filled a bobbin with white "Bottom Line" (also from Superior Thread). 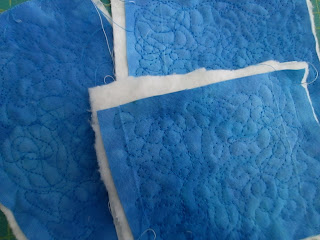 But on the back, the story was quite different: 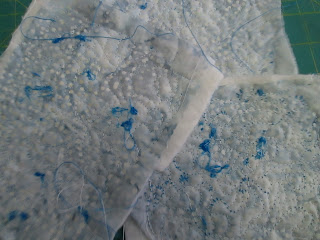 I put in another new needle, thinking there might have been a 'burr' in the first one.  No difference.

I went on to the Superior website and found that this thread needed a heavier weight in the  bobbin (Bottom Line is very fine).  I switched to the only thing I had on hand in the right colour: "Masterpiece", which is a cotton thread but of the recommended weight.  Some improvement, but not long-lasting.  I continued to end up with this:

And did I mention that even though the machine 'sounded' fine for the first wee bit while doing this, there would come the moment when it seemed to "choke"?

I gave up.  I think the problem lies not with the needle, thread, fabric or tension settings but with the internal workings of the machine when it tries to do free-motion.  And I have no time to drive an hour to Red Deer on snowy roads of questionable condition to take it in for a "look-see".  (Miss Pfaff doesn't do FMQ well, and I have no motivation to test her in this, so don't suggest it, okay?  😉

I went to Plan B:  I put the feed dogs up, put on my walking foot, kept the "Masterpiece" in the bobbin and the "Brytes" on the top and quilted wavy lines in the sky... 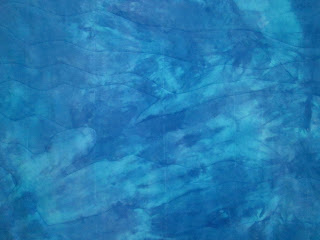 And in the snow.  For the snow, I switched to King Tut in a lovely pale blue variegated thread because those of you who live where there's snow know that it's not all white (grin)...

Then I created the shoreline...the distance and the "island".  I fused it in place and decided -- ENOUGH! for today.   Tomorrow...Sabbath...calls for rest.  Worship.  Peace.  Quiet.  Knitting.  Hand stitch.

The thread-painting of the trees/shore and the figure will have to wait till Monday. 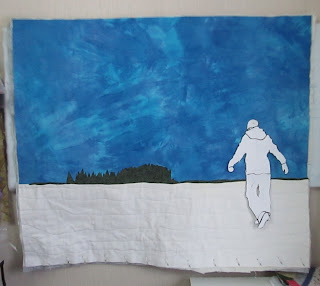 What are you up to this weekend?  I'm linking in to Nina Marie's Off the Wall Friday, and checking out what my colleagues are doing...

Email ThisBlogThis!Share to TwitterShare to FacebookShare to Pinterest
Labels: free motion quilting, Off the Wall Friday, Sometimes you can walk, Superior Threads

Sorry you're experiencing FM quilting problems. It's so frustrating, I have 3 different machines and all have their quirks but all work great for free motion quilting. Hopefully you'll figure it out!

So sorry, Margaret. Machines can definitely be finicky. I just took one of mine in for service since it didn't like doing a simple straight edge line with a spun silk broadcloth and a 100% cotton that I am sure it used to sew up fine.
Hope your work on Monday goes more smoothly.

oh, boy! That's no fun. For sure you need a breather!

So sorry for your frustration. Maybe it needed a rest? The lines your quilted are effective so perhaps that was what was meant to be? Yes, snow is not white. Saw some last weekend but its long gone.

I had to raise the upper tension on my machine for FMQ - and I had to raise it nearly all the way. I've never had to do that before.... but it worked.

I've run into similar issues with one of my machines. It can be so frustrating, especially when you're in the zone to get some FMQ done. The piece is coming along beautifully.