As I write, rain is teeming down, and there is thunder -- which is distinctly odd for an October morning in Central Alberta.  In the Dog Days of summer, perhaps -- but on an early morning in the autumn?

With my Jewish friends and family celebrating their New Year, and Canadian Thanksgiving only a week away...I am thankful for them (friends and family, that is), for my cozy wee house on the rolling prairie, for the "Goats on the Roof" coffee that is brewing in the kitchen...and for a bit of time to pause for reflection and a blog post!

Around the sewdio, installation prep continues for Mark on the Body, which goes up in a little over 2 weeks.  I finally took some time last week to read the trade paper version of the book I've written about it (there's a box of 'em in my kitchen)...and sure enough...two typos stared out at me.

I've been been dipping into a library book recommended by my friend and colleague, Judy Warner: Steal Like an Artist by Austin Kleon.  I say 'dipping' because it's not the kind of book you need to read from front to back; you can simply find a section that intrigues you and drop in there.

This morning I opened it to #8: "Be Nice (The World is a Small Town)".  I grew up in a small town, I live in a smaller town...and as a female brought up in the fifties in a church-going household, "Be nice" was a cardinal rule. 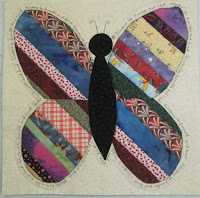 Being nice requires a certain humility.  (There I go again; back to Tim McGraw's "Always Stay Humble and Kind".)

Nowadays, having devalued 'niceness' for the past forty-or-so years, with women being criticized for being "too nice" or "not nice enough" (right, Mrs. Clinton?), and a certain fellow being admired (!) for being distinctly not "nice", to the point where some of us are trying to resurrect "nice" in a desperate move to keep said fellow out of public office...

It was refreshing to read these words in Kleon's book:


The golden rule is even more golden in our hyper-connected world...The best way to vanquish your enemies...? Ignore them.  The best way to make friends...? Say nice things about them.

Now he was talking about the Internet, but I'd say this is reasonable advice in the real world too.

He goes on to say that in our creative journey, more than ever before we will need:
There you go.  I just had 100 books printed -- and several bought online -- with glaring spelling errors in them.  But, like "design features" or "Amish moments" in quilting, clearly those typos are there to keep me  "humble and kind".  And so...time to swallow my pride and move on!

Two pieces of better news -- for which I needed those humbling typos -- also arrived this week.

Yesterday, the latest "Reveal" for 15 x 15 was posted.  The theme this time is "Botanicals", and you can see it HERE.


Once again I experimented with InkTense (R) pencils and machine-stitched hand-written script; I remain uncertain about the quality of the results but know that over time, with practice, I'll produce better.  I toyed with stitching the script in black or writing it in fabric pen, but then decided I just wanted it to blend in with the rest of the foreground -- the bright canola field -- so left it at that.

I also quilted this piece far more densely than I usually do, which was a test for my fussy-pants Husqvarna.  Even after its annual tune-up, it refuses to enjoy stitching free-motion spirals...

In other news, Denise Milne, the owner of the Bonavista Fine Art Gallery in Sylvan Lake, whose taken a large number of my pieces into her beautiful space and hung them with paintings, has also posted my very own "Artist's Page" on the Gallery's website!  And...she sent me these photos of my work now on display: 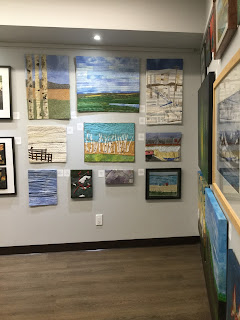 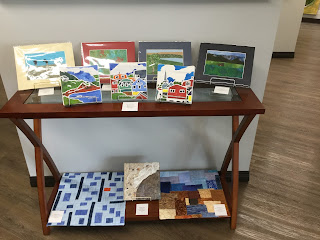 As for the battle between Mrs. C. and Mr. T...if all the "stupid stuff", the sturm und drang, threatens to make your blood pressure rise, best take Kleon's wife's advice: "Quit picking fights and go make something."

I'm off to do just that -- but before I go, I'll link in to Nina Marie's Off the Wall Friday .  She too has pretty good advice this week: seize the day; life's too short to sit around watching green bananas ripen!  Catcha later, eh?
Posted by Margaret at 9:32 am

Email ThisBlogThis!Share to TwitterShare to FacebookShare to Pinterest
Labels: Bonavista Art Gallery, Humble and Kind, humility, Off the Wall Friday, Steal Like an Artist, Tim McGraw

A week away! How did that happen. Must be typo!!! Good for you, Margaret. Nothing ventured. Nothing gained! And you are gaining lots!!! I may have to steal from you! ;^)

Your page on the Bonivista Fine Art Gallery site looks wonderful...Congrats!!! I admire your ability to just keep moving forward and reaching your goals.