Out of the Blue

If you read my last post, you might remember that I was hankering to start something new -- probably related to the next challenge posed by my 15 x 15 Group.

That's not quite what happened.

Oh, I got an idea, alright, but not for that piece.

For the last long while (since June, at least), I've been meditating on the song by Tim McGraw, "Humble and Kind".

Since the RNC and the DNC (Republican National Convention and Democratic National Convention respectively) in the U.S. -- to which I paid more attention than is probably healthy for a Canadian -- I've wanted to do something -- anything -- to keep our borders open, our long, historical friendship safe, to get rid of the vermin in the GOP -- but none of that is really within my power or abilities.

I thought about posting a prayer a day, but in the end that's a bit "preachy"...at least, for a Canadian...

Then last night I got a picture of an art quilt -- dimensions, pattern, layout, etc.  This has happened to me before.  Anyway, it was based on the idea of staying humble and kind...a reminder to my American friends and family, and a warning to anyone (wherever) seeking any position of (perceived) power on this earth...

So first thing this morning I went into the sewdio and began.

I wanted lots of colour, so I created a 13 1/2" square string-pieced block: 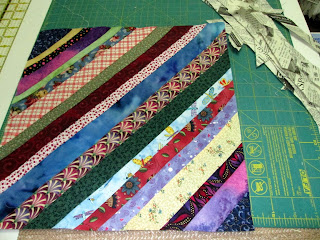 I applied Wonder Under fusible web to the back, and drew the shapes of butterfly wings...and then cut them out: 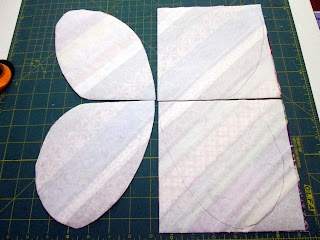 Here they are, ready to apply to the background: 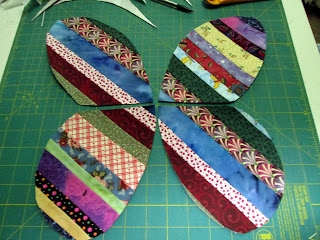 Once fused to the background, I backed the piece with freezer paper to stabilize it and wrote this phrase over and over around the butterfly: "Always be humble and kind."  I quilted around that in thread to match the background, and then quilted in the ditch of the strips on the wings using Superior Thread Monopoly "invisible" thread: 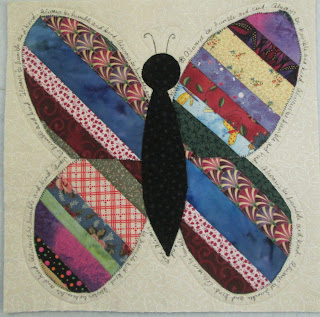 I decided it needed more quilting, though, so stitched around the outside edges and then echo quilted around the butterfly: 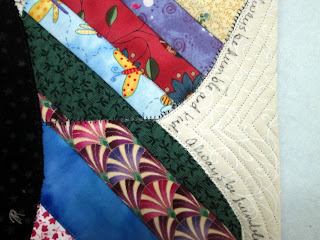 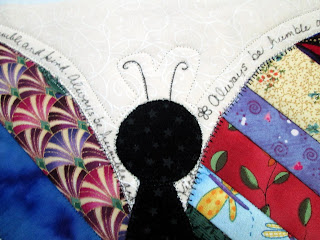 This evening I applied a facing to the piece, and so can basically call it 'finished':


It uses so many traditional quilting techniques that I'm not sure it would sell in the SAQA Benefit Auction...and it's too late for this year's auction anyway...but it's what had to be quilted.  I don't think I've ever done an entire piece like this -- from inception to completion -- in one day.  Go figure.

It will end up where it's supposed to end up, I guess.  Meanwhile, this remains my daily reminder and my prayer for my American colleagues, family and friends...and especially for all seeking positions in the next U.S. election:


God be with you, every one.

Linking this up to the Canadian group, WIP Wednesday over at The Needle and Thread Network...and heading off to bed!

It's wonderful and meaningful.