I've been a bit slow off the mark with the EB Master Class this month.  You guessed it: the topic is "Line".  When EB announced it, I knew exactly which of my finished pieces I wanted to use as a starting point...but then stalled at how to work on it without copying myself!

The work was based on this photo:

Here's the piece I made:

And here's how I began to manipulate it for each of three possible design ideas:

First, I turned the photo of the piece into a 'contour drawing' with my photo editing program: 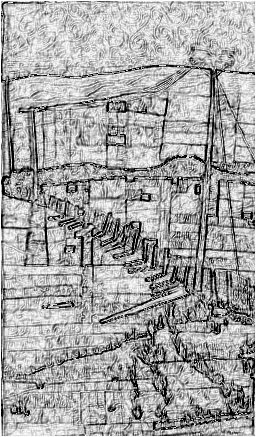 I traced this onto a piece of 8 1/2 x 11 tracing paper -- just the main lines I could see -- using a Sharpie (R) marker.  I copied this tracing paper image onto plain paper, and enlarged it slightly.  From the enlarged drawing I isolated a section and enlarged that:

Second, I found a detail photo of the original piece: 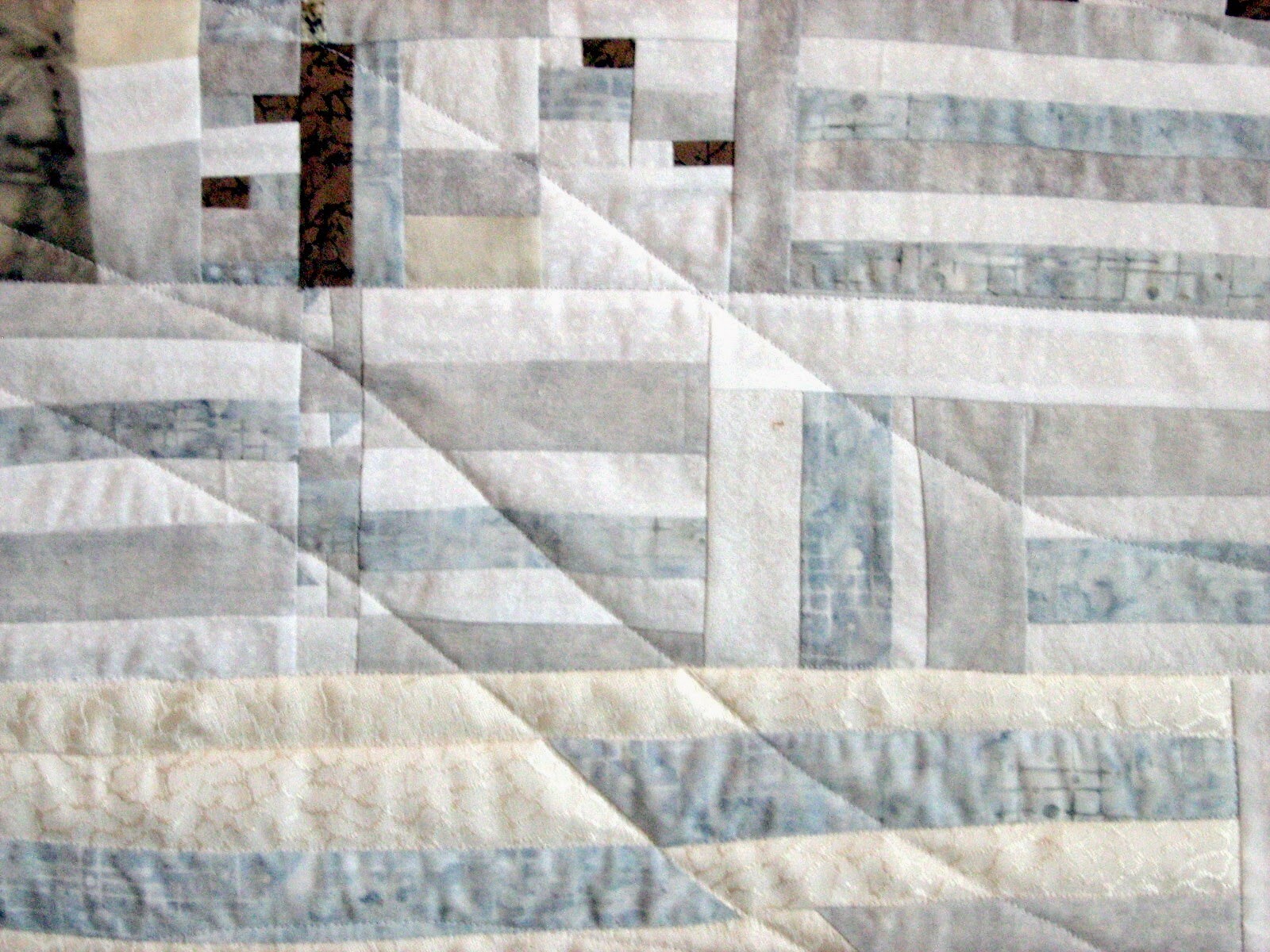 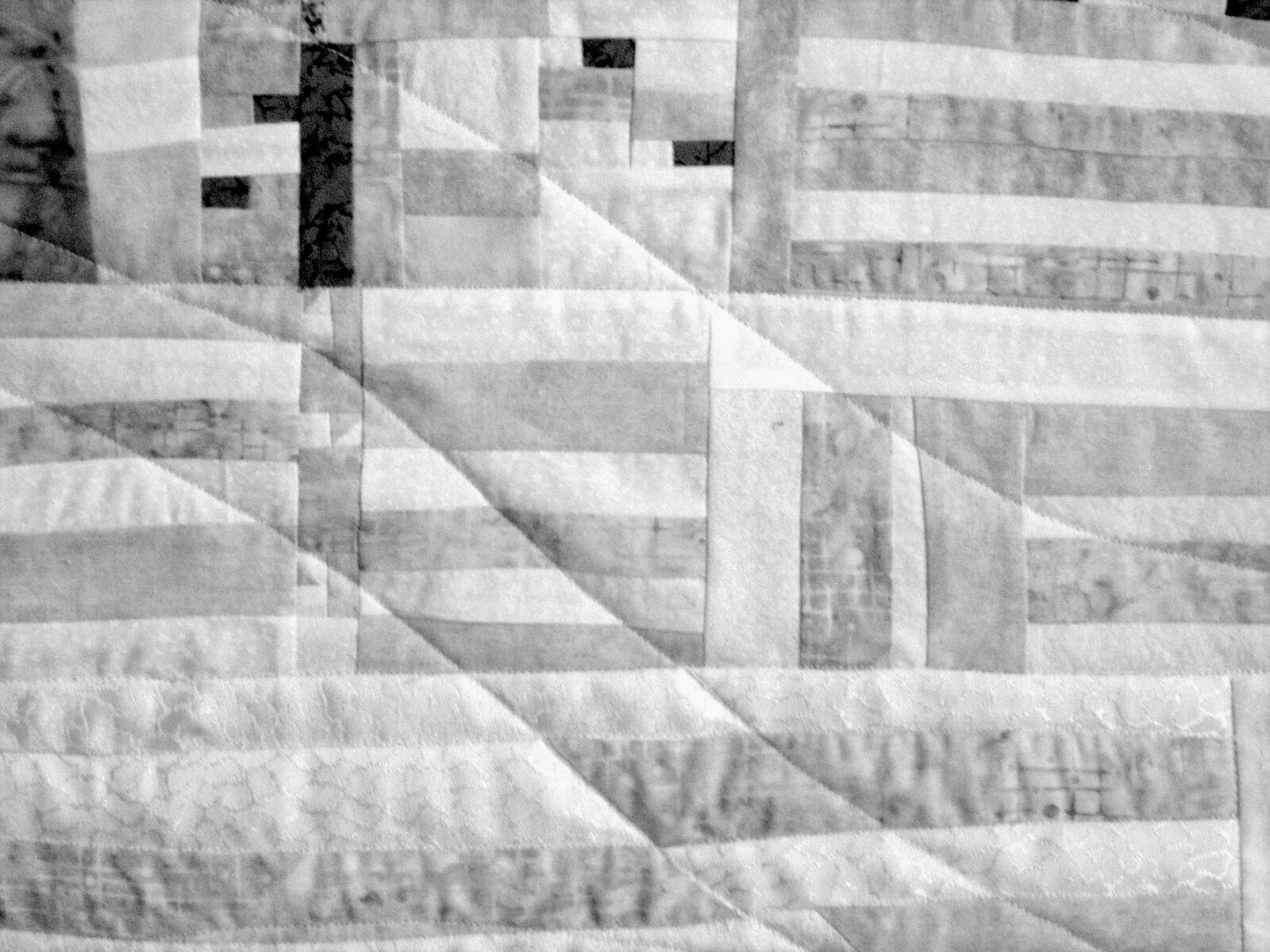 From there I converted it into a "contour drawing", isolated a section of that and enlarged it:

I think all three have potential for recreation in fabric and thread, to differing degrees.  I've sent the three 'Ideas' off to EB and await her feedback.

On other fronts, I've been hand-stitching a piece intended for the Spotlight Silent Auction fund-raiser at the SAQA conference in Portland (I have to have it sent off within 10 days), and finished the March block for the "Zen" Block-of-the Month.  The latter was once again an experience that was not particularly relaxing...the flimsy background fabric (provided with the pattern) argued with the less flimsy dark and medium prints, and only a good spritz with "Best Press" made the block lie nicely when it was finished.

On the knitting front, my entry for the March challenge in the "Socks From Stash" Ravelry group is going well...I am nearing the toe on the first sock...and the wedding prayer shawl is proceeding apace: by the end of today I'll have finished 7.5 of 25 pattern repeats (each is 24 rows), keeping me on track for the end of May...

Now I think I'll link this up with Nina Marie's Friday post (because I still can!) and take a nap...!
Posted by Margaret at 1:29 pm

Glad to see you are getting back to full speed, Margaret. Enjoy! I like your exploring attitude in coming up with a line design.

I like all 3 the ideas, but no. 1 is my favorite.
Love your silent auction piece as well.
You're working so hard!

You are always so productive! It is so good to see you back to full speed! I like your ideas.

A real transformation from the original and all 3 ideas would work. Love the auction piece and look forward to seeing it in person!

Most interesting modifications of the original. It will not look like copying yourself at all. (Line was my favorite of the EB classes.)Looking forward to seeing your product.