Get a Move On!

The topic for February's EBMC is "Movement"...

We began by visiting several websites to see examples that EB provided of artists creating movement in their pieces.  An example?  Hokusai's famous painting, The Great Wave.

As this piece is now in the public domain, it has been used to inspire other artists...such as my C&G tutor, Linda Kemshall, who combined it -- in paint and stitch -- with a traditional quilting pattern -- "Storm at Sea" to create something wonderful that she titled "The Big Wave" (scroll down).

In the examples (including the one above), I found that the idea of movement was clearest to me when curved lines -- whether in fabric or in stitch -- were involved.  Another quilter who incorporates movement in her pieces and does so beautifully with both shading and stitch is Maria Elkins.


When EB mentioned wind-blown hair in her class notes, I immediately remembered Ms. Elkins' piece featured on the cover of  SAQA's publication, People & Portraits.  You can see the piece in the header for Ms. Elkins' website; it's well worth taking a closer look to see her stitching of the hair.

Pam RuBert's "Tango with a Technopus" is another example of an artist's using the shape of the fabric -- curves and swirls -- to express movement.

Following the research, of course, came the sketchbook work...TREMBLE!  I have never consciously attempted to express movement in my work.  Still....there are the birds that visit my property...and my feeder... I've never been successful photographing them.  They move too darned fast!  And I'm a point-and-click photographer.  Even if my camera could capture them, the instructions put me to sleep.  I'd never figure it out!

I turned to the internet for images, and found this one from backyardbirdshop.com:

The feeder resembles mine -- and the birds resemble the chickadees that show up regularly.

Using this as an inspiration, I tried my hand at sketching: 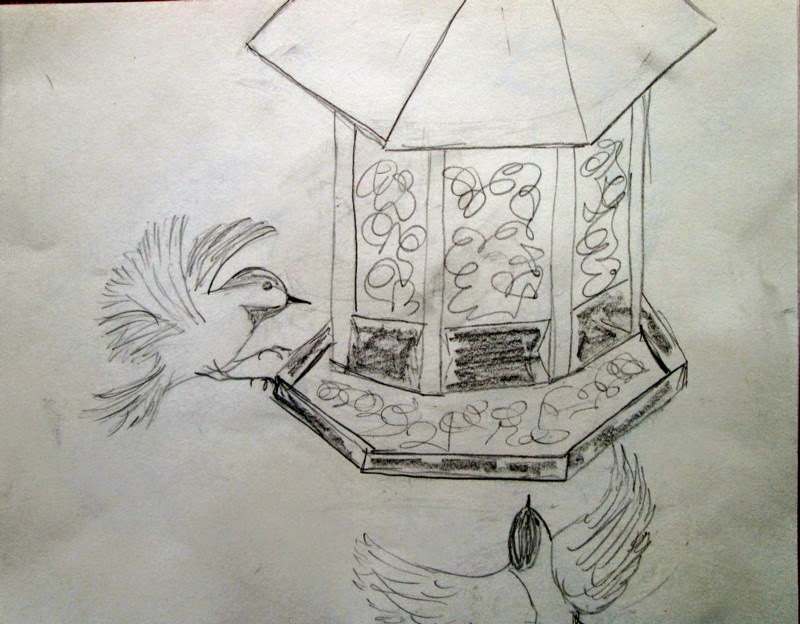 First, I ran out of room for a third bird, which made it seem 'unbalanced'.  Second, it struck me as rather formal and stilted.  Darn.

Solution?  Go out for a jog (this was yesterday afternoon, when we weren't having a snow storm.)  Now, Julia Cameron of The Artist's Way fame, espouses walks, which I find are helpful...but somehow, I seem to resolve even more things in my mind when I am jogging (I'm no longer fast enough to call it 'running').

Sure enough: while I was out there trucking along the highway and off through the snowy side-streets, it occurred to me that I didn't have to get so caught up in rendering a precise (precious?) image of birds-at-feeder.  What I was aiming at was the MOTION involved.  When I got back to the house I came up with this: 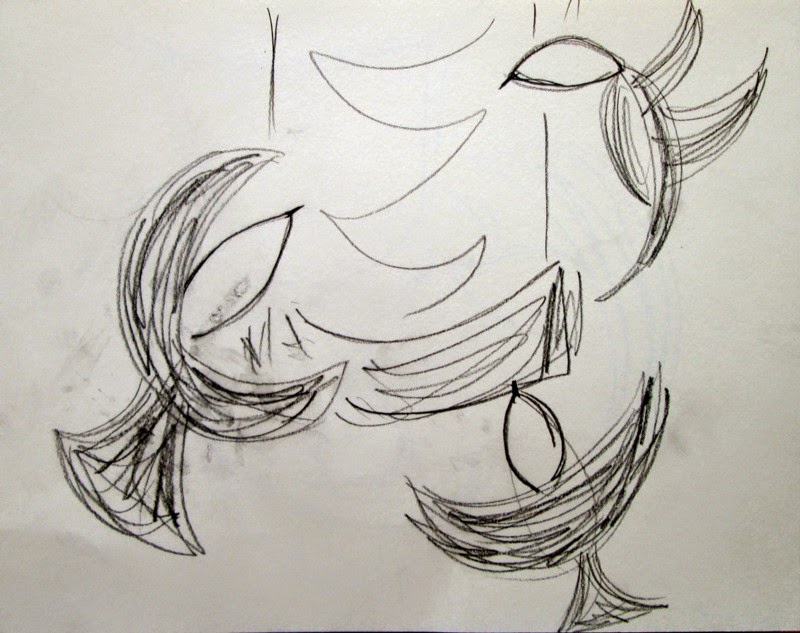 I've submitted to EB the progression you see here; we'll see what she has to say.

Meanwhile, as I'm waiting, I'm working on some more hand-quilting.  I have only borders -- 1 wide side border, all the narrow borders, and the wide outer border -- to do...and then I can bind this piece and give it to J&E, my wonderful neighbours, as their belated Christmas 2014 gift.  They are SO good to me -- you have no idea!

And this afternoon, home early from The Shop because of the weather, I assembled the February block in this year's use-it-up Block of the Month, "Zen".  Four squares-in-a-square, it was a surprisingly UN-Zen-like experience.  A bit of 'reverse sewing' and then -- Oh-what-the-heck! kicked in...but I do like the fabrics I chose to go with the background: 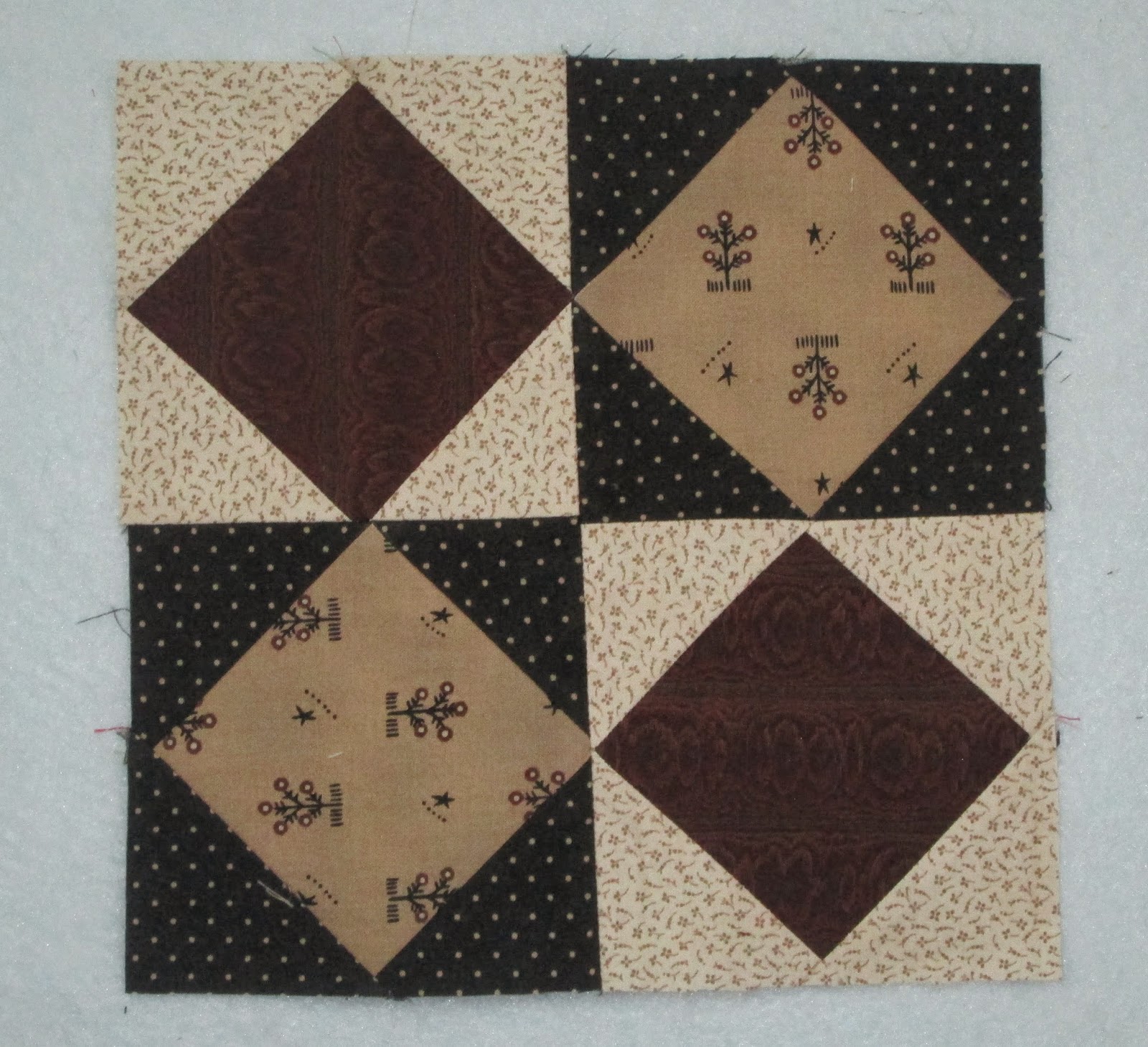 Curves. Motion. I am drawn to that. oops! a Pun! lol But I do like your idea and simplifying it is where I'm heading in my own thoughts on what I want to do. :)

Ooo-love the second sketch! Lots of motion and interest!

Margaret, I love your sketching. I like both drawings but number 2 definitely focuses on movement. Really curious to hear what feedback you receive.

I really like your second sketch! I think it has more energy and illustrates movement better than the more precise version. I am eager to see what EB says.