This week I missed posting to WIP Wednesday over at NTN because...well, I had WIPs on Wednesday but no time to post.

Did I mention I'm working at The Shop two days a week right now?  Have been since after Thanksgiving.  It's Prime Yarn-craft Weather and customers have been flocking to the store for yarn with which to knit and crochet gifts for Christmas and whatever other holidays they celebrate -- on top of newly-arrived babies and grand-babies, etc.

In quiet moments there I've been able to work on my own knitting...but there haven't been that many quiet moments!

The days are long -- I leave here around 8 a.m. (yes, it's still rather dark then) and don't get home till close to 7 p.m. (yes, it's dark again then)...which makes for a fulfilling but lo-o-ong day.  By the time I've sorted myself out and read/responded to correspondence and fed the cat (and sometimes, me)...it's time for bed!

To keep Wednesdays and Fridays from feeling like 'catch-up' days, I'm trying to spend more (structured) time in the studio.  By Wednesday evening this week, here's what was going on: 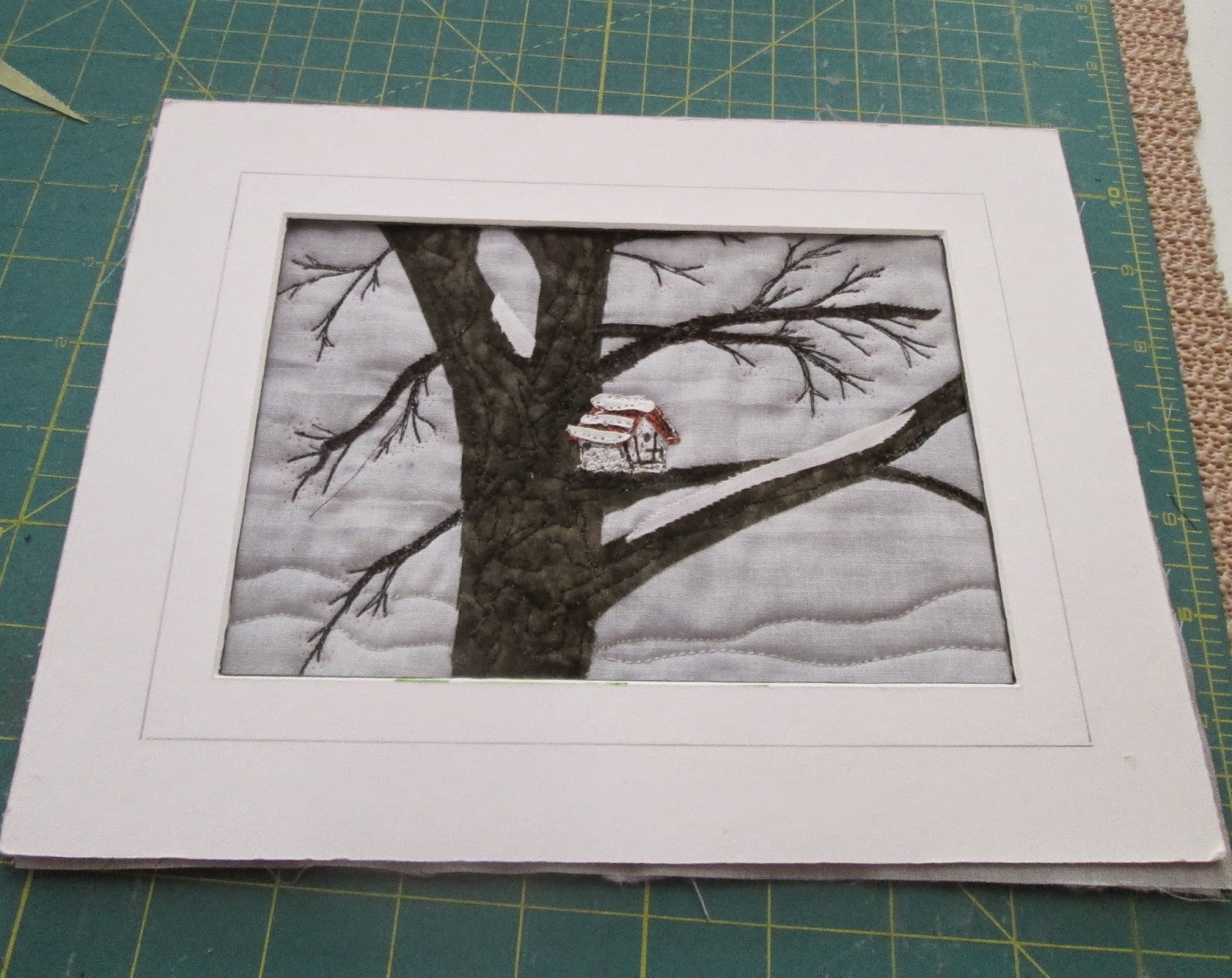 Having decided the branches looked right, I began to add tiny beads to represent the small "apples" that grow on this particular tree (it's in my back yard).  (Yes they are the same beads that are featured in "Winter Dinette".) 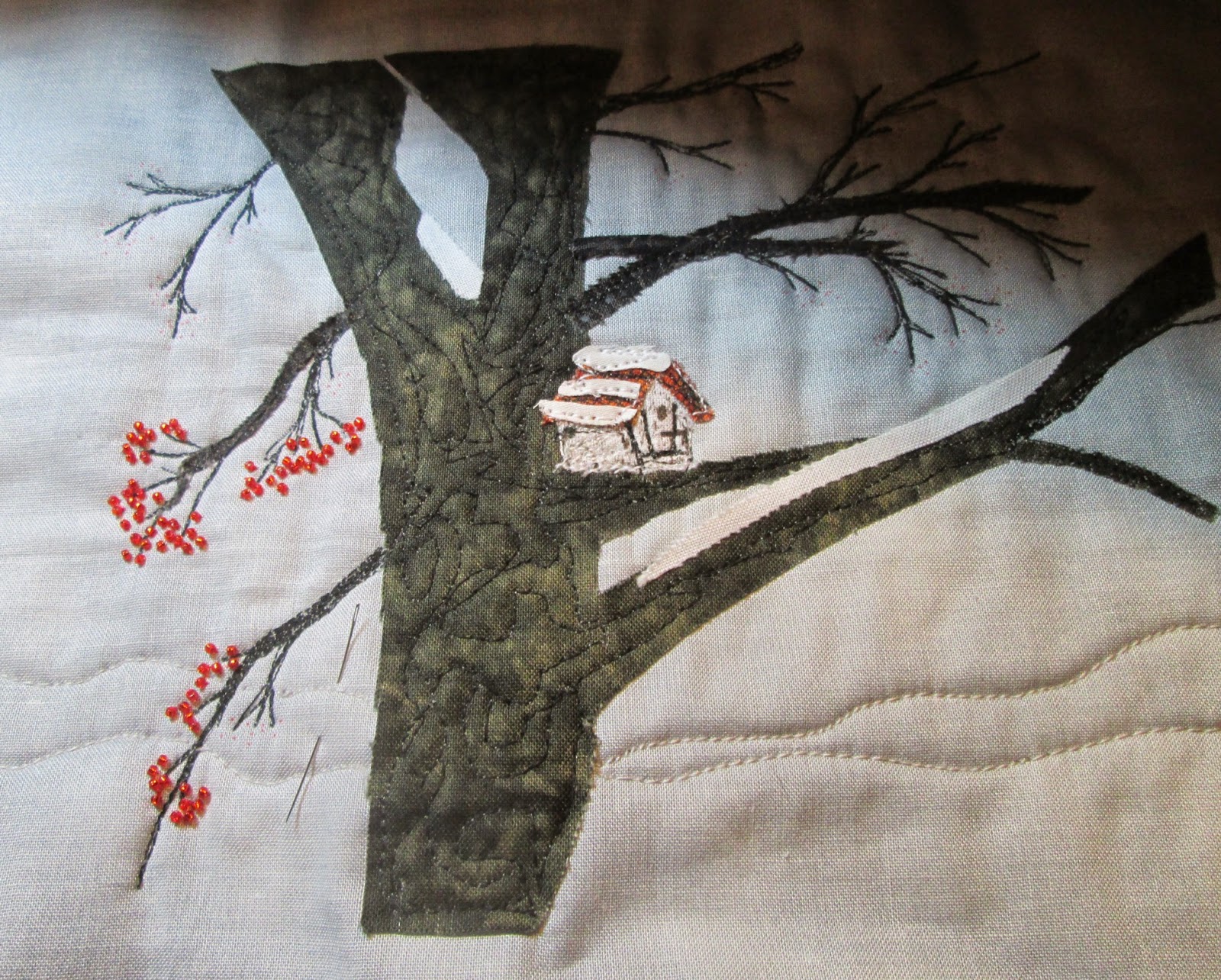 The shadow is caused by the position of the piece on my worktable (a keyboard shelf at my desk; I was watching a PBS program on computer while adding the beads).  :-)

Today I will finish adding the beads, trim the piece, put some stay-stitching around the edges and apply the mat.

The piece is based on a photo from another corner of my favourite field: 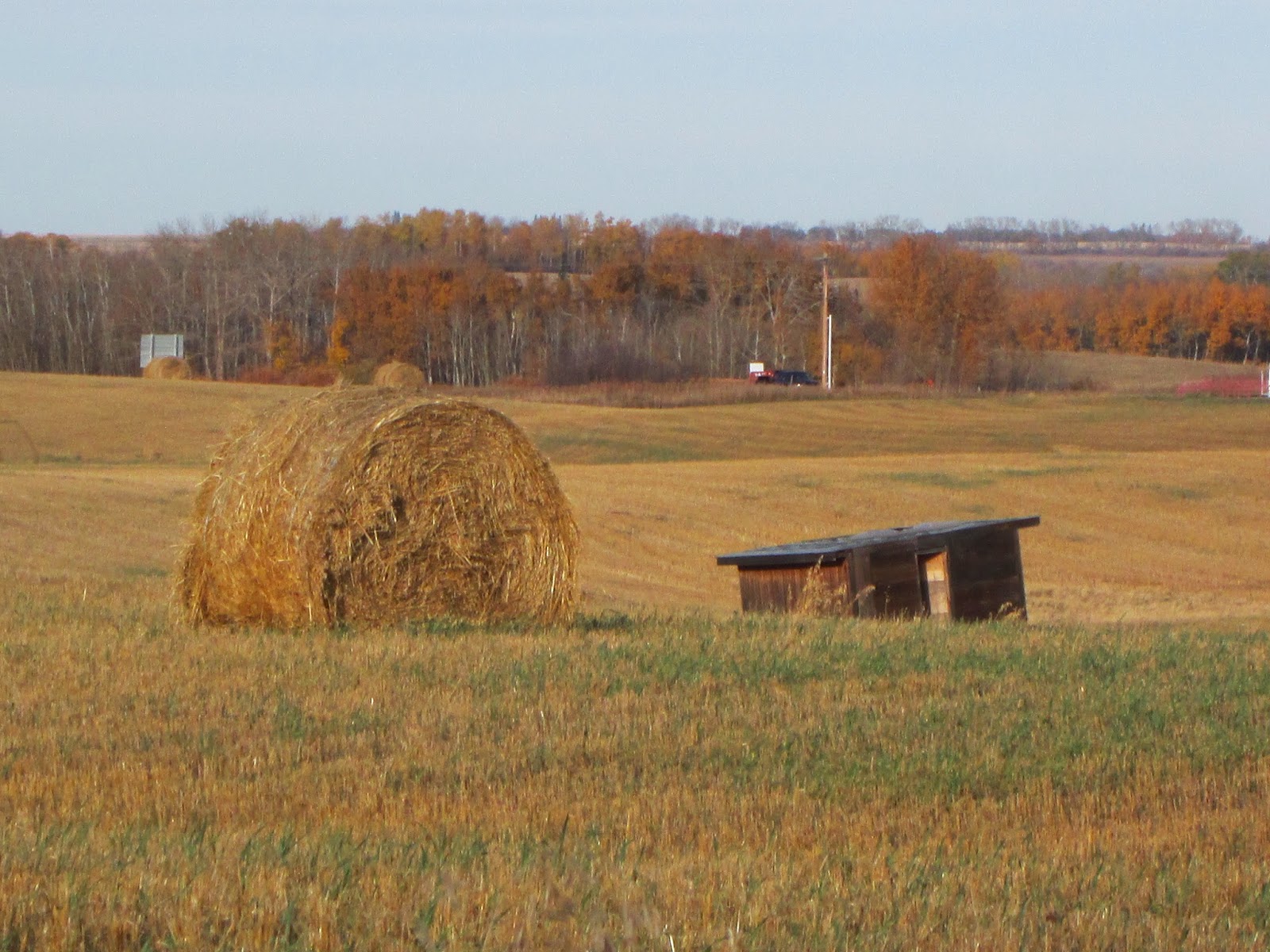 Until earlier this week, there were hay bales all over that field.  (Don't be confused; the bale is not larger than the building!  That's just the angle at which I took that photo, which I was taking not so much for the building but for the colours of the trees and grasses.)

That said, the presence of the bales has given me an idea for some of the stitching on the 'field' in the foreground of the piece.  :-)

Being reminded of the quilting design was a lesson I re-learned Monday and again Wednesday as I watched my former tutor, Linda Kemshall, on an episode of DMTV entitled "Art as Inspiration".  I watched it three times, I think, as I prepared for my next 15 x 15 piece on the theme, "Roads".  As usual, I have several ideas buzzing around in my head.  The DMTV episode helped me by reminding me of the steps I learned in my C&G -- inspirational photos/research; sketchbook notes and perhaps a drawing or two to get the colours and impressions in mind...etc.

Adhering to that lightly structured process is very freeing, really, because it slows me down, requires me to really look at my sources of inspiration, focus on the colours, lines and forms that appeal to me, which I can then extract for my quilt design.  It has a calming effect, serving to "unscramble" the ideas and thoughts crowding my brain.

The sorting-out thus far is both in my sketchbook and on my wall...

And the process continues...

I'm now linking to Nina Marie's Off the Wall Friday.  The plan: stitch those beads to "Gone South II" while I sip a fresh cuppa coffee and read what others are up to.

Looks like EB is using a section of her Abstract Art for Quilt-makers class with the current Master Class Students.  Why don't you visit too...and see what's going on?  Happy Friday, everyone!

Email ThisBlogThis!Share to TwitterShare to FacebookShare to Pinterest
Labels: DMTV, Linda Kemshall, Off the Wall Friday, The Crafty Lady, WIPs

You have been working hard, , Margaret.,love the little deserted bird house.,are you going to make a hay roll with those threads? It is looking very promising.

Your piece based on the hay field is looking every evocative. I love the colours in the photo too.

Thanks for reminding me that I should also get out my old sketchbooks and revisit some of the steps to help me to reagin my focus.

Dark early and late kinda slows one down for sure. White stuff floating down over here and I'm looking forward to some slower paced activities. Mats are very useful. I gotta check out your link as I think my camera is gonna play a more important part in my own work. Have a good week, Margaret!