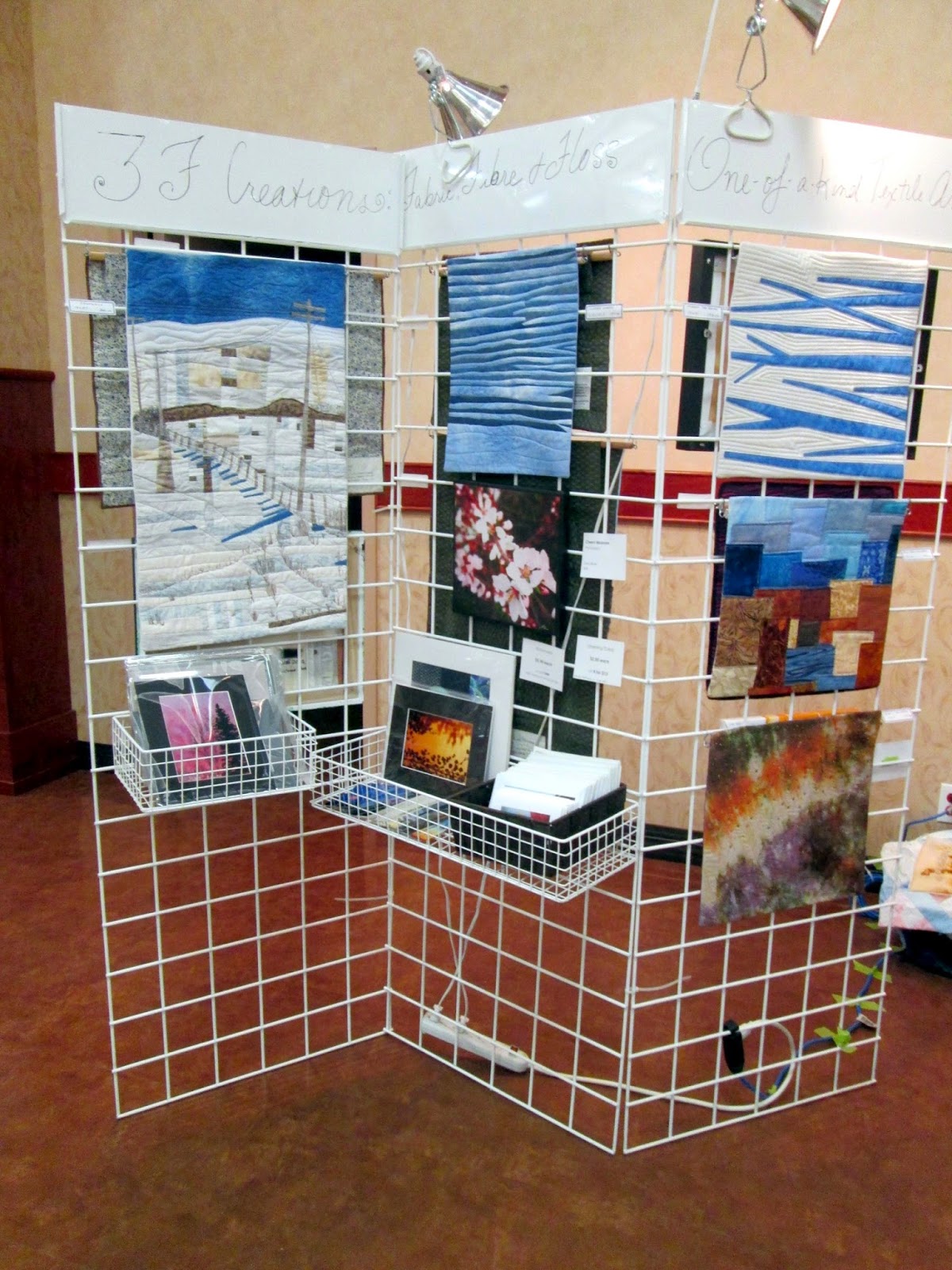 Adrenalin was running high in the lunch room yesterday as 60+ artists gathered for a wonderful repast just before the Fifteenth Annual Encore! Lacombe Art Show and Sale opened its doors.  We'd been bustling in and out since Thursday afternoon, setting up our back-drops, tables, walls and works.  Anticipation was in the air.  As we left for the exhibit hall one wished another, "Have a great show!"

The first afternoon was -- as usual -- full of browsers.  The Red Hatters visited in full regalia; there were numerous very senior citizens (I'm guessing in their late seventies and upwards) -- and an abundance of young parents with kids in strollers. 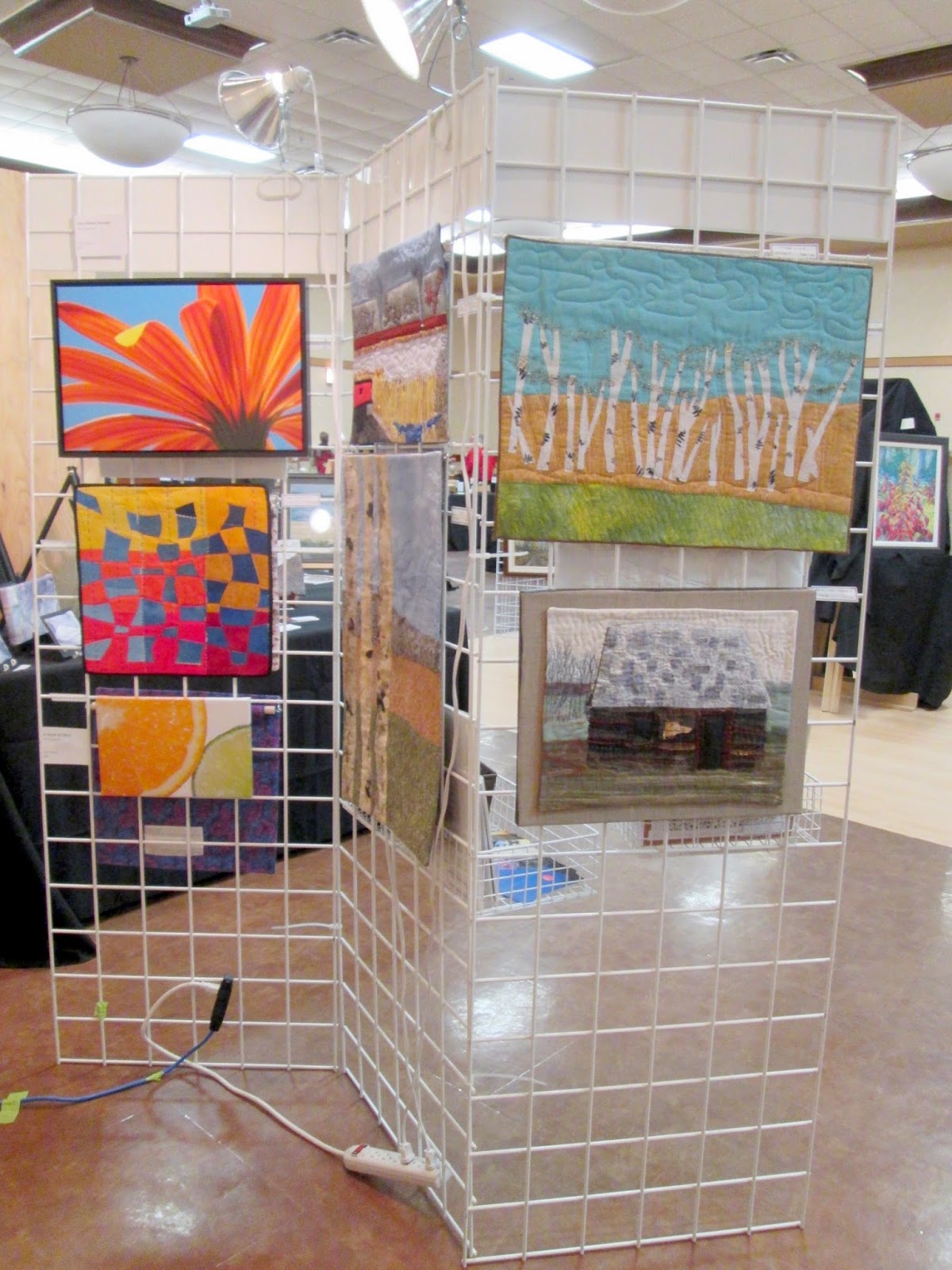 Once again I'm the only textile artist in the place.  This year I'm situated between a potter (same gal as last year) and a painter -- a new fellow who paints carefully executed figures and detailed still life in oils.  My daughter, Gina, couldn't be with me this year as she was away all week on business and won't arrive home till late this evening (I believe)...but I had permission to intersperse some of her pieces in with mine as we did last year.  I was challenged to place pieces in a complementary way based on size, colour and theme; I think it makes for a very effective presentation, but it's definitely a challenge!  :-)

Another viewer picked up my business card -- and I could tell by his furrowed brow that he was thinking.  It delighted me when I was able to confirm for him that yes, I was the same "Margaret Blank" who had a piece in the "Meet the Best of the West" SAQA Western Canada show that he saw at the Kiwanis Gallery in Red Deer earlier this year.

I had several post-cards about the current Western Threads collaborative exhibit to give away, and by the end of the afternoon they were all gone.  Luckily, I also have my own post-cards on which visitors can make note of that show.  Several did so; I'm hoping they'll get up to the Royal Alberta Museum in Edmonton to see it before it closes in early August. 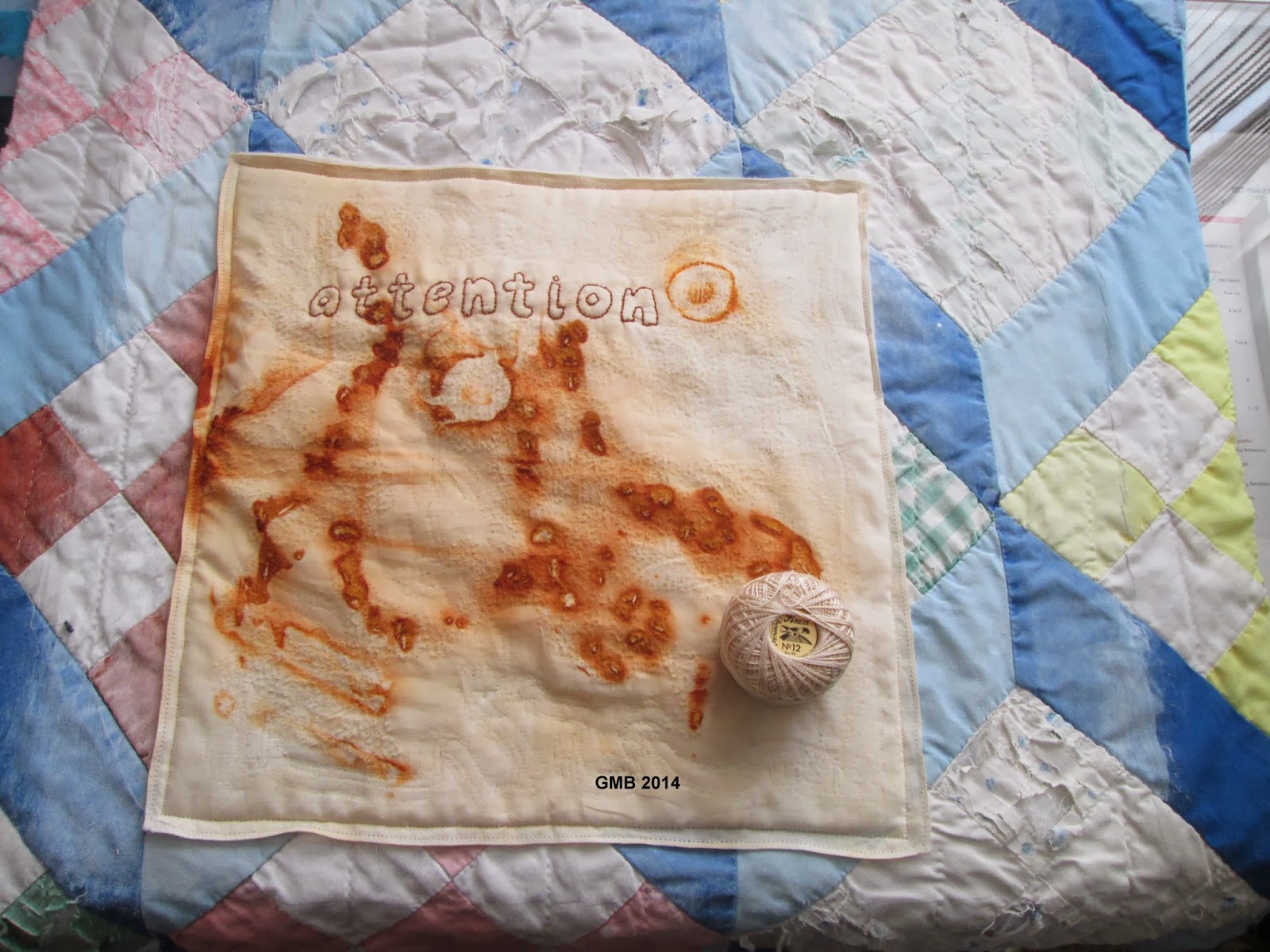 The rest of the afternoon was quiet as to sales.  I sat and stitched on a "statement" piece I'd let lie dormant for the last couple of months.  It's part of a triptych with the working title, "Deteriorating Civility".  ( I managed to get the stitching finished in the early evening and laid it out on the display table with a note, "Work In Progress".  I'll be working on the second section today.)

A steady stream of viewers came by with an assortment of feedback: 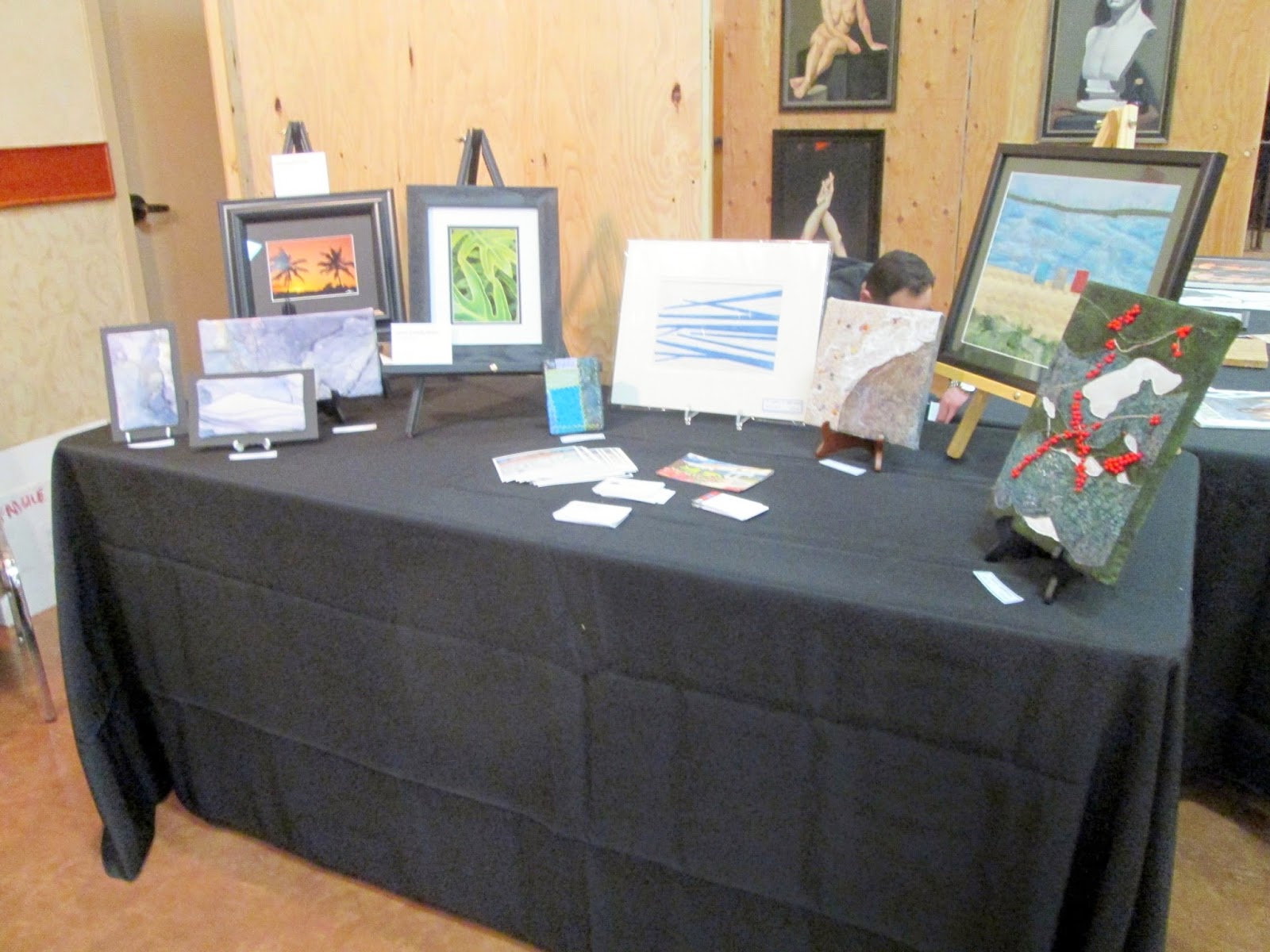 After 5 p.m. the viewers changed up somewhat.  The ticketed event for the evening was "The Art of the Motor Cycle", featuring over a dozen amazingly air-brush painted Harley Davidson 'cycles, sponsored by a local dealer.  I've never wanted to ride a motor cycle, nor do they attract me, but these machines and the artwork they sported were pretty impressive!

The testosterone level in the hall mounted, as the exhibit drew more men than I've ever seen at an art show.  The women accompanying many of them were equally interesting to observe.  Tattoos abounded on both genders, as did tee-shirts and jackets emblazoned with elaborate scrolled text proclaiming their favourite 'cycle brand.  Many of the women stood tall on spiked heels that had to be at least 6"; one wore vintage-look nylon stockings, complete with seams up the back, between her heels and short, narrow skirt.  Truly a colourful crowd.

This portion of the evening audience weren't quite sure what to think about much of the art on exhibit; many gave only a passing glance to my textiles.  Others looked genuinely confused -- a bit like deer in the headlights.

At the same time, there were in the crowd many who attended simply because it was guaranteed to be a different, fun event, and they wanted to support the Lacombe Foundation for the Arts, the beneficiary of the fund-raiser.

The young woman who was selling beer and wine tickets turned out to be none other than the person who'd bought my piece at the September 10 x 10 fund-raiser.

After her shift she came by the booth with 3 friends, and bought two of the minis, effusing about all of the work and wishing she could afford more.  I'm completely tickled to think I might have a fan -- and one my daughter's age or younger, at that!


And now for the Most Unusual Comment (so far) -- made by a woman who took a good look at all the pieces hanging on my display and, standing in front of Waiting for the Train, complete with its painted Lutradur (R) and hand-dyed silk ribbon embroidery, asked:

So...when the show is over what will you do with these?  Will you take them home and put them altogether in a quilt?


P.S.: Linking to Nina Marie's "Off the Wall Friday" -- have a great weekend!

Email ThisBlogThis!Share to TwitterShare to FacebookShare to Pinterest
Labels: Lacombe Art Exhibit 2014, miniatures, Off the Wall Friday, viewers' comments, Waiting for the Train

You had an interesting show to say the least! A bunch of interesting comments especially the last one :). But you never know who will go away and think about a piece that interested them - might be a future purchase. Good luck.

Two sales! That is a complement to you…….What is great is that you were unique and opened people's eyes to another form of art. :)

Margaret, congrats on a great show. Nice that you sold those pieces, but that is no surprise to me since they were beautiful. Loved the comments people made....good for laughs.
Chris

I'm so pleased you had such wonderful comments. My husband asked me the same thing once...why don't you take all these arty things and turn them into a real quilt. I'm currently making him a "real" quilt but some people just don't get it. If I was standing in front of your booth, I'd be wishing I had more wall space, too.

The last comment is just so funny! I am still laughing. Congratulations on the sales.

Wonderful highlights of your day. ha! Supportive as my hubby is, he kinda wishes I'd sew some of my wallhangings together, LOL