As promised -- quickly, this morning, because I have to get into the studio -- here are some other quilts to which I took a fancy at the CAQG Show this past weekend:


This colourful piece is "Baltimore Garden", made by Myrna Wagner of Red Deer.  At 46" x 64.5", it is completely machine appliquéd on her embroidery machine; she also did all the machine quilting herself.  Every block has extensive outlines in satin stitch -- I admire her skill!  Here's a detail:

Here's a detail of a piece entitled "Among the Leaves" -- also created by Myrna (I didn't get a full-length photo):

The technique used crayons -- and a Sew Be It pattern.  This one (above) is 54" x 72".  Quilting by Cheryl Whitten.  Myrna's interpretation is more pastel than the original from the website...and I love its soft approach.

I thought this one was just plain fun.  It's called "Road to Nana and Papa's" and was created by Terry Rowland of Lousana, Alberta:

At 64.5" x 96", this quilt is an out-sized "play mat" that Terry made -- and quilted herself -- for her grandchildren to play on when they visit.  It's designed for games with toy vehicles, for "I Spy" and for learning their colours.  A great combination, eh?

I come from a long line of Brits on my mother's side of the family.  Seeing a Union Jack always makes me smile, and this one is no exception.  Created by Kathy Dunn of Red Deer County, this one is 76" W x 38.5" L, and she did both piecing and quilting.  Kathy mentioned a pattern in her statement -- but not which one.

Last but not least, here's one that's a combination of piecing, colouring, embroidery, and fun fabric.  It was such an assortment that I had to take a photo: 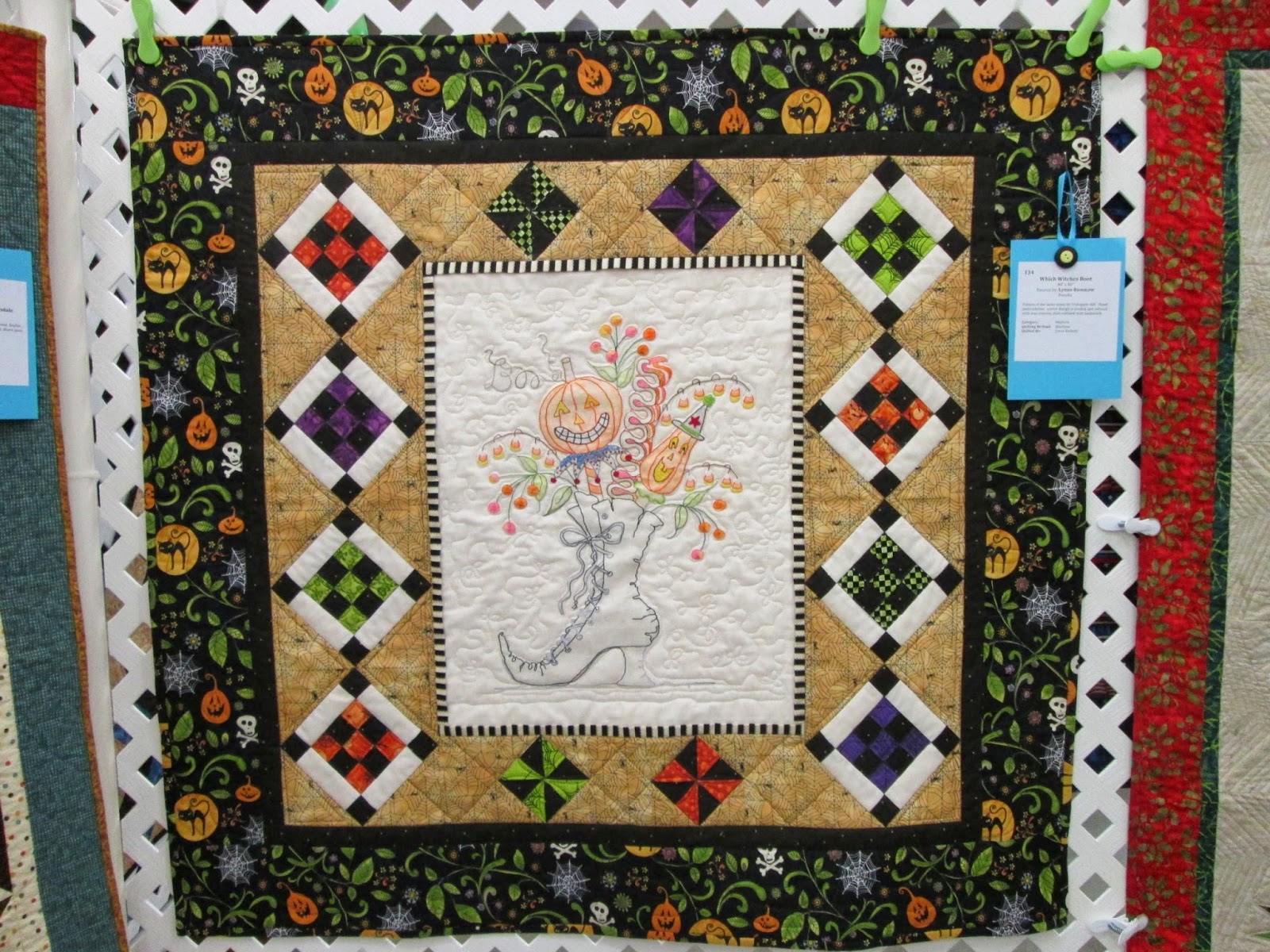 "Which Witch's Boot" is a Crabapple Hill pattern.  Here it's interpreted by Lynne Rosenow of Ponoka, Alberta; it was quilted by Joyce Barkley (Just Humming Quilting of Stettler, AB), and finishes at 40" square.

So...that's it; that's all for now, folks!  For those of you who may have missed my late-placed link yesterday, the SAQA portion of my Red Deer visit is available on the SAQA Western Canada blog.

Off to Edmonton tomorrow for the Artists' Preview of "Western Threads" at the Royal Alberta Museum on Thursday morning.  More later!
Posted by Margaret at 9:16 am

Thanks for sharing these. I don't get the chance to go to shows. Although all the quilts are outstanding, I love the Union Jack and the Road to Nana and Papa's.

some very interesting quilts that were at the show! I saw a crayon quilt a few years back and have been thinking that it might be time to test out the idea for myself! And love the 'tea leaves' quilt in the previous post...