Even the hardiest Canadians are getting rather tired of this prolonged winter.  Here in Central Alberta the snow fell November 2 and has never left.  We had some last night, as a matter of fact -- a small amount, but enough to add insult to injury.

Add to that the fact that my kitchen taps haven't functioned since Friday (frozen pipes), and I've begun to wonder if we've been transported to Narnia, and just didn't know it -- you know, where it was always Winter and never Christmas....

Blessedly, the bathroom's appliances all still work (!), as does my furnace, and my sewdio is in my home (the largest of the three bedrooms), so I've been cozily working away.

Today I assembled the third in my current Block of the Month kitted top:


Rather handsome, eh?  The pattern is in black and white, but even so, it appeared from the drawing that the red half-square triangles were intended to go around the red centre block.  However, if I were to make another, I'd think about putting the red ones in the four corners...because that plaid print is so red...it all seems a very large 'bull's eye' right in the middle!

I also put together a random green nine-patch (like the ones in the background I made earlier) and tested out two techniques for the roses I want to use to adorn the surface. 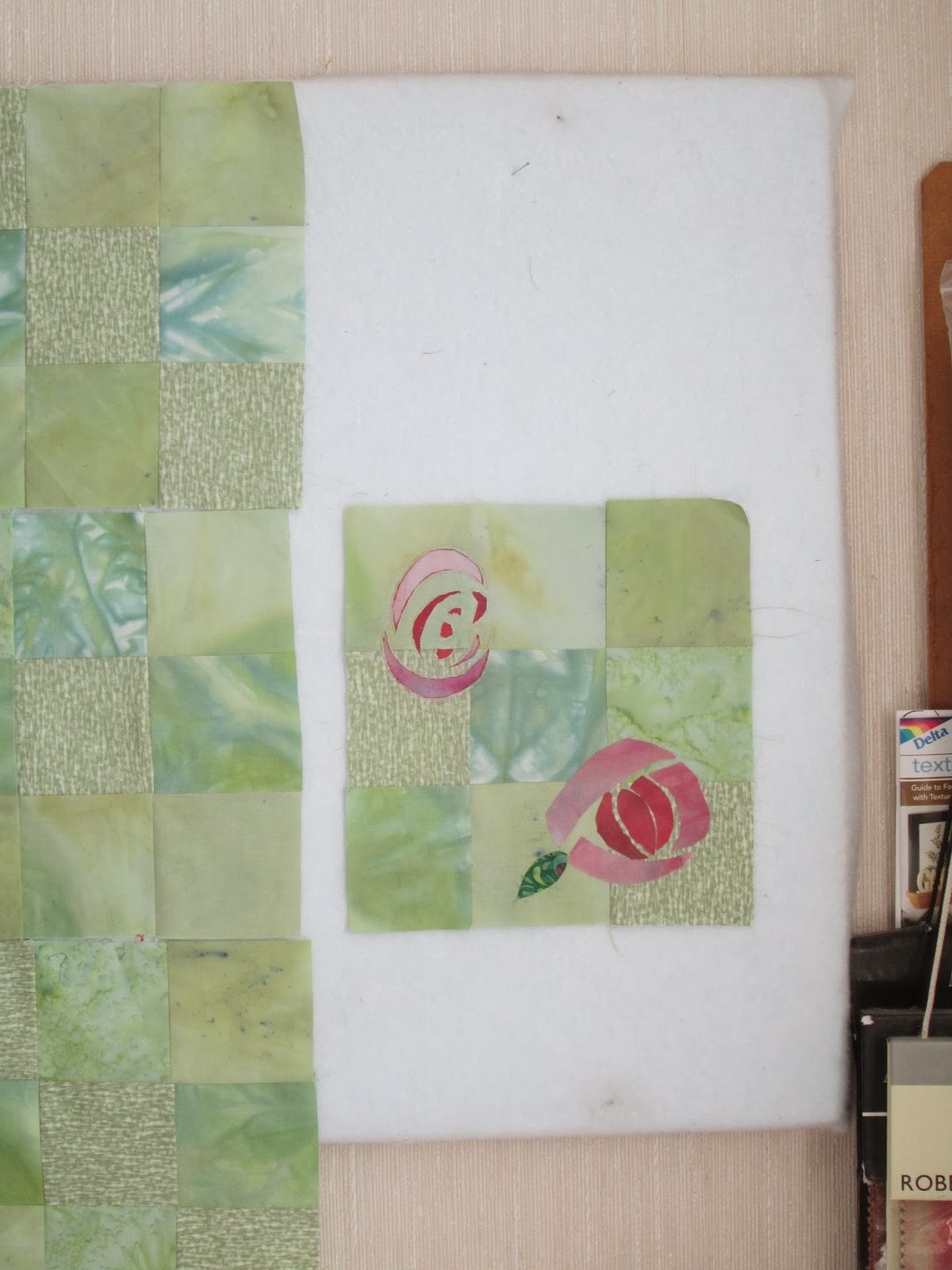 From a distance, as in the above shot, both look rather well against the green.  Closer up...can you guess my preference?  (I used the same fabrics for each sample technique.) 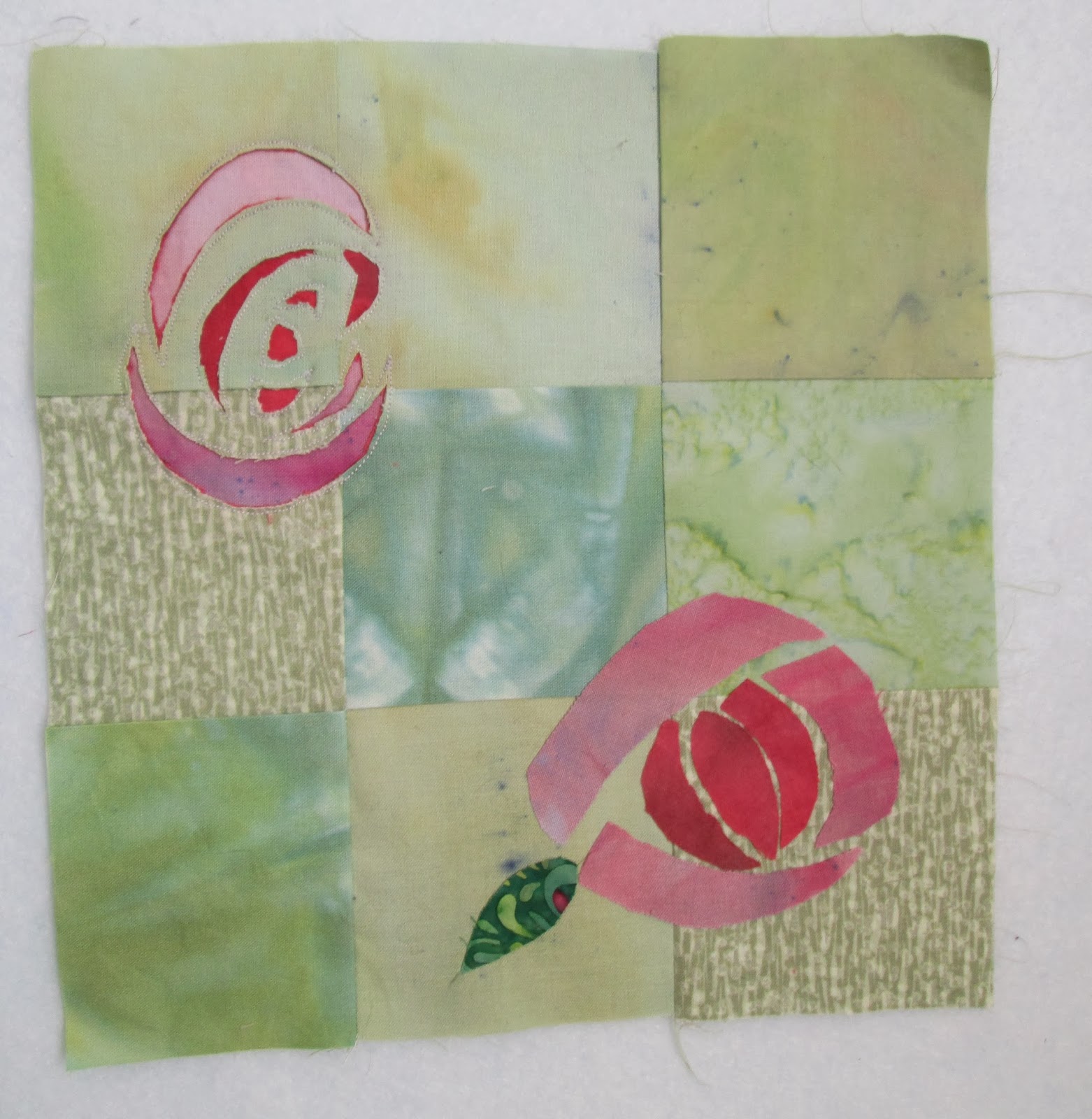 Yes...the fused applique -- for these reasons:


The cut-back would work fine if I were doing a small piece with a few rose motifs on a smooth background.  The fact that the background is a pieced grid adds seams to the mix...making it tougher to stitch and to cut away, and adding to the bulk.  The grid concept is essential to this piece though -- based on Rennie Macintosh's work -- so... there you have it!

The rest of this week is tied up with a variety of things outside the house...so it will be next week before I get to work on this piece in earnest.  Still and all, I'm thankful that some decisions have been made about how to go forward, and I appreciate your kind support and encouragement, Gentle Readers!

Have a great week and...stay warm!
Posted by Margaret at 6:57 pm

Ooooo I feel so sorry for you. All this snow!!!
You better come to live in the Caribbean.
You're right the fused applique is the best choice.

I like the look of the fused better. I think it stands out better against the soft background, giving the piece more depth. Love the fabrics in your kit. May I please steal the term "sewdio"? I'll give you credit.

Narnia happening here and on into Ontario! Pretty but starting to get a bit relentless. Fused looks great to me!

Lovely roses and you're right, the fused one is the best one.

so, we won't discuss where I am posting this from except to say, for a change, the only white I see is surf.
I like the fused appliqué as well and agree about moving out some of the red into the corners.