WIP for a Wintry Wednesday

I'm not fooled by the clear, clean blue sky and the bright sunshine; it's -25 C out there, with a wind chill to -33 C.  I've been out once already this morning -- walked downtown (about 5 blocks) for my hair appointment -- and that's it for today!

It's okay; I have plenty to do inside.  Before the WIPs, though, a "finish" of sorts: the February Block of the Month for the "Four by Four" semi-kitted pieced series I'm working on this year:

"Propeller" seems an odd title for a block in a kit with a Christmas fabric/colour scheme, but there you are.  The background came with the pattern; the rest of the fabrics I collected to go with it -- or not.  The gold was a late discovery (Saturday!) in my stash.  :-)

As for WIPs...not much in the way of photos this week.  I'm still working away on the sheepie sampler for my friend B; I've finished the gusset and am well down the foot on my daughter's sock; I've finished a hat for the charity tree -- except to sew it up at the top, sew in the ends and add buttons; and I've finished a cowl as a birthday gift for my friend C. "Mark on the Body" marches on.   None of these things have had photos taken of them -- at least, not recently.

I am, however, in the last week of Pamela Allen's class, "About Contrast".  This week we can work on whatever we like, using the principles we've studied, as long as we explain our intent with the piece in question.

Typically, I'm still playing with trees.  Here's what I wrote when I posted to the Yahoo group earlier this morning, referring back to the piece about which I posted HERE:


Worked some on my "Lesson 3/Lesson 4" piece yesterday.  As I didn't have enough of the background fabric to enlarge the piece altogether, I decided to cut the building down to size (as it were) and add more trees.  Of course, it's full of fiddly bits now so I was darned if I was going to take it apart to spray baste/fuse everything. So I pinned it.  I am going to stitch the silly thing and see what happens.

My intent with this piece?  No clue!  There is some colour contrast and some size contrast but frankly, not much of either.  You will notice that to re-size the building, I left part of it off (from the inspirational photo) and I've switched the locations of the trees around and added one that's fallen down.  This was the only way I could make the piece "fit" for me, reflect my style and the subject matter I like to work with (trees, old buildings, prairie landscape).

I don't have much imagination when it comes to creating scenes and I don't like making still life pieces (though I admire those done by others).  I get my inspiration either in photos of the natural world around my home, or by being given whole pictures (visions of a sort) that come to me holus-bolus and dictate how they are to be made.  Go figure.

So here are a few photos of the WIP.  One is a full photo, and two are detail shots. I tried to make the bare trees have some sort of dimensionality by the use of fabric that implies colour/shape.  The piece is still about 18" square but will be trimmed once it is quilted, to about 15" square, I think. 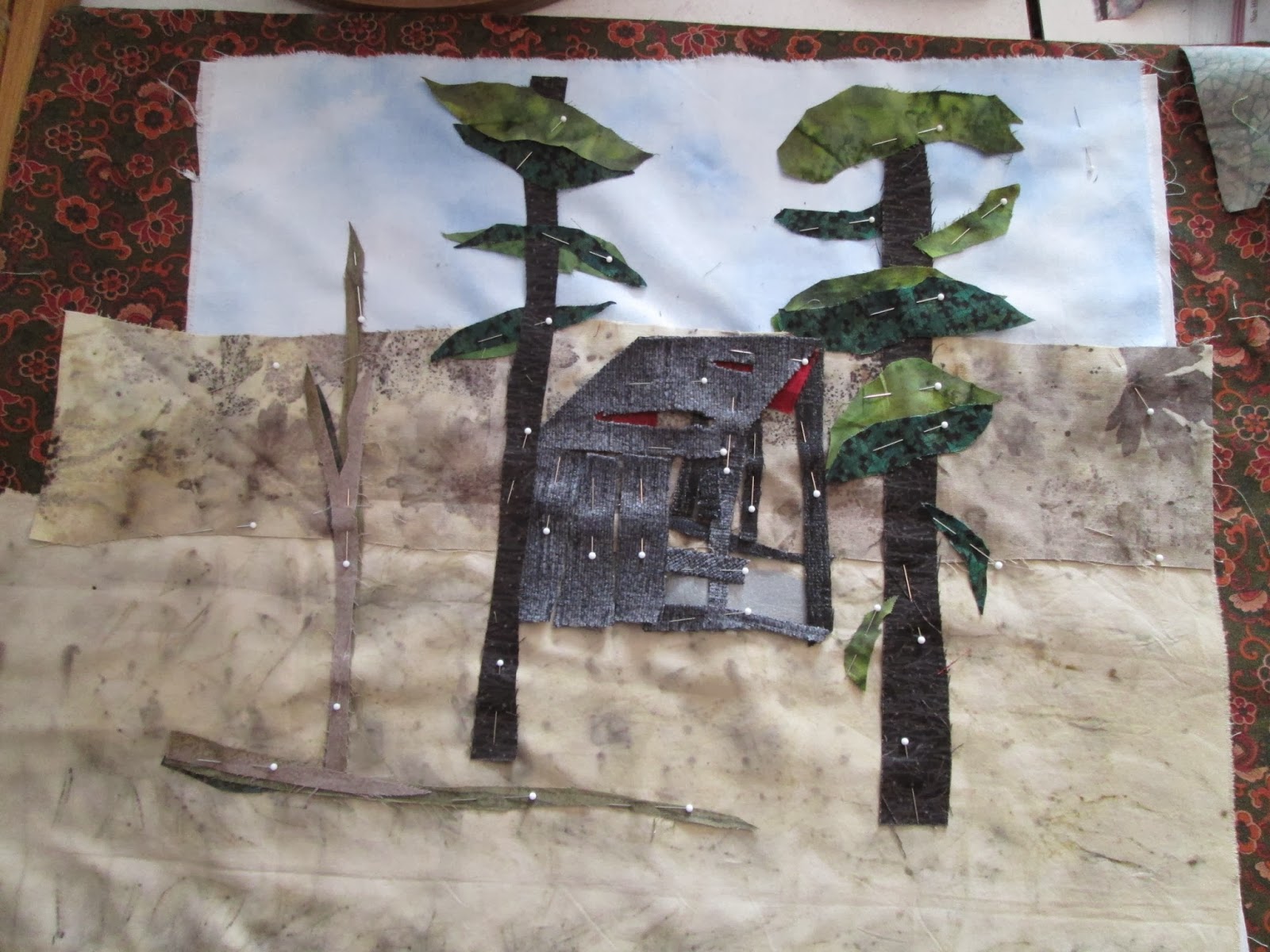 Linking in to WIP Wednesday over at The Needle and Thread Network...and then going into the sewdio to stitch things down.  That oughta keep me warm, eh?
Posted by Margaret at 12:06 pm

This has a lot more dimension but I did like the other.

Hi Margaret
Still struggling with trying to post from my iPad via Feedly. I like the bottom piece. Sounds like the class has been a real stretch.