As I reported Wednesday, I've been back in the sewdio part of each day for a few days now.  I say 'part of' as a way of explaining that my intentions (= 'most of') have not been (entirely) fulfilled.  I've been trying to increase my sewdio time but when one is a single person living in a Very Snowy Country, one finds that sewdio hours are eroded by the time spent either a) on the roof removing snow from inside and around various vents and/or b) shovelling out walkways and driveways -- even with the help of one's neighbour!

I'm pleased to present this finished piece, which was shipped off to E in Virginia yesterday, ExpressPost, with tracking and insurance, in the fond hope that Canada/US Customs/Border Patrol won't see fit to sit on it for an undue length of time, so that it will arrive by January 31 and be part of the SAQA 25th Anniversary Trunk Show:

For the curious, here's a detail shot of the moss/fungus "embellishment" (Lutradur (R), painted and heat distressed: 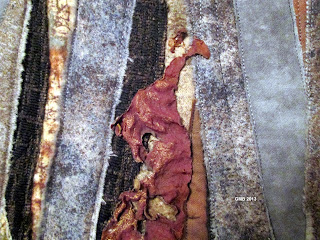 And here's the inspirational photo -- a close-up of a portion of a trunk of one of the trees in my back yard: 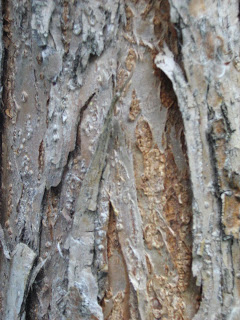 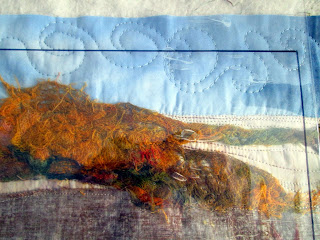 2. And one of the trees/fields...also quilted: 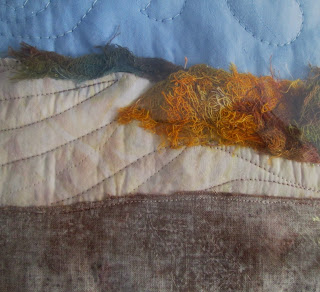 I'm SO thankful for J's machine!  So far, it hasn't failed to produce!

On the Knitting Front, while I wait for my DD to confirm size for the "Elm" socks,  I'm continuing my word on the entrelac scarf I started years ago in a class at River City Yarns.  Here's what it looked like when I abandoned it, shortly after taking the class: 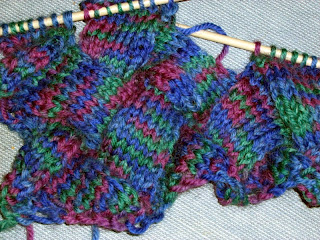 And here it is with a wee bit more progress made: 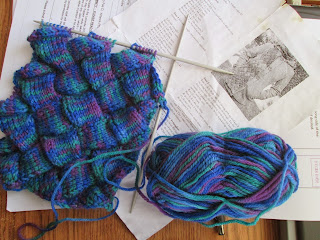 I know it doesn't look much different, but it is longer -- and the best news is that I've learned to 'read' my knitting in entrelac such that I know where I've left off and what I need to do to begin again.  That alone is worth the effort!  Pattern: free from Allison LoCicero at Freckles and Purls (see link in right side-bar.)

Having trekked up to the roof for the second time this week , to clear snow and ice around various vents, and having shovelled out both walks and driveway, tomorrow I'm setting in to work on the main motif for the "Rhythm" piece, and to do a bit of plain piecing with the January block of my 2014 BOM -- the second in the series of BOM kits in my stash.  I cut out the fabrics earlier this afternoon, so all I have left to do is assemble the pieces, square up, and photograph!

Meanwhile, I'm linking up to Nina Marie's Off the Wall Friday...and will savour the entries over the weekend.  Have a good one!

I love every bit of what you have done here! I can't wait to see your SAQA piece-I have wanted to capture the look of curly bark for some time.

Your quilted pieces are wonderful. When I stopped knitting I had seen this pattern and it almost made me restart! The snow! It was up to my knees and my dearie will have to redo all the paths again. Our roof is too steep to collect snow, thank goodness! Stay cozy!

ps- I gotta tell you your word verification is the blurriest I've encountered! ;) If at first...

I LOVE your bark piece. Even with all the snow interruptions you did a lot!

Along with your projects, and congrats on not only finishing but mailing it off on time! I like the word sewdio!
LeeAnna Paylor
lapaylor.blogspot.com

I love your pieces. They make me feel that I am really "there."

Love the tree study! Bark has always fascinated me and you captured the texture so effectively. Bravo.