I Finally Gave In

...and did a bit of snow dyeing Friday.  We've had an inordinate amount of snow this year -- most of it powdery, perfect for dyeing -- but I've been so focused on shovelling it, clearing it from the roof vents, and driving in it (when absolutely necessary) that I've had little energy left for creating with it!

Friday the temps were a bit warmer, so shovelling wasn't such a chore.  In the midst of Shovelling, Phase I (stoop, side and front walks), I made up my mind.  I took a wee break and put together two tubs.

This time I used the PFD Kona cotton and PFD Pimatex cotton I'd ordered from Dharma Trading early in December.  I took 1/2 yard of each (leaving me 1/2 yard for future playing) -- and yes, being from the U.S., these are yards, not metres -- and placed one in one tub, one in the other.  Dry.  Just like that.  I piled pristine powdery snow on top, and sprinkled Procion MX Fibre-reactive dye powder over each tub, using a metal 1/2-teaspoon measure I reserve solely for dyeing. 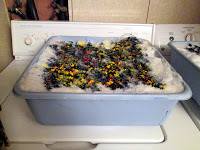 In one tub, I began with a sprinkled layer of 'Sky Blue', followed by 'Lemon Yellow' and a touch of 'Golden Yellow', as I was going for green as the outcome. 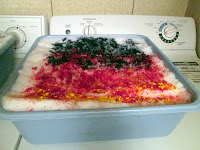 In the second tub, I was going for a 'sunset sky' effect, with golden yellow (at the "horizon") merging to orange merging to red, then purple, then blue at the top of the sky.

I was hoping to leave the tubs in my laundry area -- door closed, for fear of Pookie-cat, who's taken a liking to eating snow this winter -- for 24 hours, a la Vicki Welsh -- but alas, after only 6-7 hours the snow was completely gone and the dye liquid was pooling in the centre of each tub. (This was due in part to the fact that these tubs have a circular depression in the centre of the bottom of each.)  So...I drained each tub, then using the tubs, soaked each batch of fabric in hot water and Synthrapol for 10 minutes, drained, rinsed till clear, then dried in the drier.

Alas, the results for the green pieces didn't photograph well; I'll try to remember to point out the fabric to you if and when I use it.  :-)  However, I am satisfied with the quasi-sunset.  Although the pooling of the dye meant that I didn't have a sky in gradients of colour, I do have some very nice red-orange-pink fabric to insert into a sky or two... 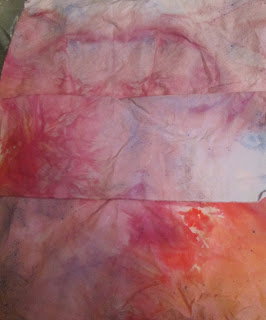 Yesterday and today I've spent in my sewdio...but that's for another post.  See ya later!

when did you use the soda ash?

Wil, I didn't. (Gasp!) :-) Usually I pre-soak in soda ash, and put the damp fabric on the bottom of the basin, then snow, then dye (powder or liquid). However this time I decided to see what Dharma means by "PFD" -- both pieces were labelled that -- and didn't use any soda ash at all. I have some of each fabric left and will likely try it again with soda ash pre-soak, to compare. :-)

PFD just means no chemicals. The fabric doesn't have any soda ash. I am surprised (and happy for you) that the dye didn't all rinse out. Lovely sunset. I really need to try this out this winter. We are not lacking in snow. It snows nearly every day.

The lack of soda ash is the reason that you ended up with light colours. Surprisingly the soda ash is not compulsory, but using it definately gives clearer colors. I discovered this in a class with Jan Myers Newbury