Work on "Posh Poppies" continues apace.  Now that I'm well into this project, I've decided to focus on it until it's finished, fearing that if I put it away I'll procrastinate about finishing it.

Last week I had one poppy finished.  Monday of this week, I finished the other two large blossoms, though I might just re-do part of the second one as I'm not entirely satisfied.  Here they are, lying on the background fabric and looking better in the photo than they do up close.  ;-)


Monday I also finished the buds -- there are three of these -- and yesterday I worked my way through the leaves -- eight long ones plus three for the buds.  As I progressed, I laid everything out on top of the pattern in the manner in which they are to be assembled in the final piece: 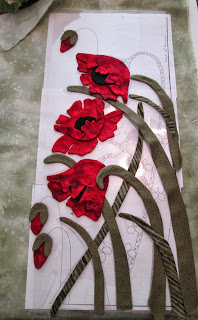 I took the photo later in the day so the green of the background and foliage seems to be showing up as grey -- it's not, really, of course!

Perhaps you can see something shiny underneath the petals and leaves.  That's a transparent sheet left over from a laminating machine.  My daughter's office has a laminator and goes through a great quantity of thus stuff.  So far, they've been hanging on to it but haven't found a use for it.  I brought an armload home with me on Sunday and used it to make the templates for the leaves in this piece, as well as for a surface on which to position the pattern pieces.   These pieces aren't being fused -- they're being stitched down.

Today I'm tackling the stems for the poppies, using my trust 1/4" bias tape maker...and as is only fitting, linking in to The Needle and Thread Network for WIP Wednesday.  Let's see what everyone else is up to, shall we?
Posted by Margaret at 11:59 am

Great project and another use for laminator sheets. Cheers

This is coming along nicely, Margaret.