This evening I attended the Preview of the "10 x 10: The Unknown Artist" fundraiser for the Lacombe Endowment for the Arts.  If you're a follower of this blog, you'll have seen my posts about the creation of my piece on stretched canvas, "Tree Study II": 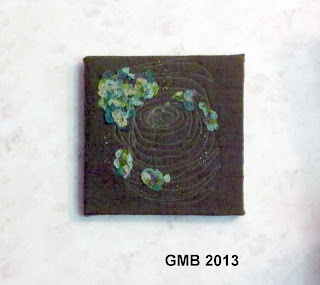 The doors opened at 6:00 p.m.; I got there about 6:10 to find my friend C waiting in anticipation.  "Have you seen it? Have you seen it?" she practically shouted at me.  It turns out that this is what she meant: 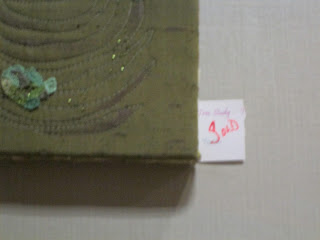 Apparently it was the second piece sold -- less than 10 minutes after the doors opened!!  Whoa!  A fast $200 raised for the Endowment fund!  I'm still reeling from the surprise.  :-)

By the time I left at 7:40 p.m. (the event was closing at 8 p.m.), over a dozen pieces (almost 25% of the exhibit) had sold.  The rest, including my daughter's piece, "Spilling Towards" will be in the Silent Auction which begins tomorrow and runs through September 29 at 4 p.m.

The good news is that reserve bids are $100, and her piece, as well as the others left after the Preview, have a chance to sell for much higher than the special fixed Preview price ($200).  This is the first such event the Endowment Fund has held, and from where I sit, it's off to a great start.

If you're in the area....stop by the Memorial Centre lobby and place a bid!

How exciting. congratulations. It is lovely!

Congratulations. Your piece is lovely. No wonder it sold right away.

Congrats from me too. Hope Gina's piece sells also!

It is a beautiful piece. Congratulations.

Congratulations to you, Margaret! Very well deserved too.