This week my focus has been on finishing the gifts for friends and family 'Back East' where I'm going for a visit.

First, there is knitting.  I showed you D's socks in my last post; they're now washed, folded with their yarn label and ready to wrap.  I also showed you A's 'Seyfert Cowl', ready for bind-off.  Now that's done and it's washed and looking very pretty: 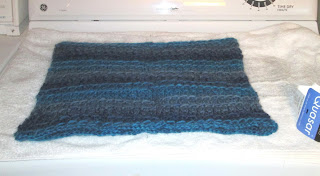 Next, the quilting -- specifically, the Hunter's Star I've been working on for my friend P's Big Birthday.   I've been having fun with markers for that project, as I reported earlier.  When the marks made with the Tailorform Purple Vanishing Marker began to disappear within minutes of application, I looked around for alternatives.  I bought a Clover White "Iron Off" marker, which advertised that as the marks dried, they showed more clearly, but found that a) it's fine tip was so fine I had to work really hard to know whether or not marks were actually being made; and b) it took so long to dry and show up on the navy cotton test fabric that I lost patience.

At the Sylvan Lake Quilt Show I discussed the popular FriXion pens with one of the vendors and other quilters in the vicinity, with mixed reviews.  I decided not to chance them.

Saturday I was in Stettler and dropped in to Homespun Seasons, a LQS...and bought Nancy Zieman's air-erasable marking pen in pink (it's also made by Clover).  It makes a clearer mark than the purple pen, and it lasted (fractionally) longer.  It's staying power was good enough for me to get my motifs quilted, particularly on the tone-on-tone cotton in the quilt.  However, I had to re-mark or guess where the markings were on the print fabric I'd used, which had some silver metallic as part of its design.  It seemed to repel the marker most of the time.

Eventually, I got the top completely marked and quilted -- as in this detail: 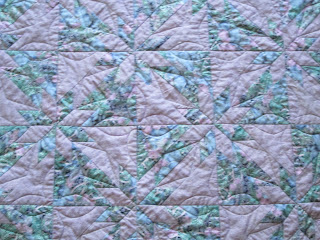 Then I began the binding.  Now, I don't usually mitre* my bindings at the corners -- and I've never done a double binding, even on a bed quilt.  I put the latter down to pure parsimony -- not wanting to 'waste' fabric on a double-thick binding -- but the former (mitring)...that technique's what Alex Anderson recently referred to as an 'alligator' in her article, "Dancing with the Alligators" in the June 2013 issue of The Quilt Life magazine.  (*And yes, I'm spelling 'mitre' the Canadian way. :-) )

Mitred corners are one of my "alligators" and for reasons known only to my subconscious, I decided this throw quilt needed them.  Blessedly, the magazine from which I took the pattern for the quilt has great instructions for this technique -- and even better illustrations: something I'd not found in previous attempts.

First, I cut the wide binding strips (2 1/2 inches) and seamed them together.  The strips were laid down at right angles, right sides together.  Then I drew a light pencil line so I could stitch along that angle, like so: 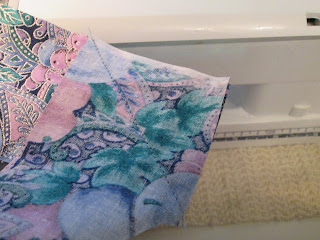 After stitching each seam, I trimmed the seam to 1/4" and pressed it open.

Once all the strips were joined in one long line (it took 5, each 42" wide, to go around this throw, with a bit left over), I folded over about 1" worth on one end and pressed it.  Then I folded the strip in half length-wised and pressed that, creating my double-thick binding.  Beginning at the middle of one side of the throw (top-side up), I stitched the binding down using my walking foot and a 1/4" seam.

At each corner I stopped at 1/4" from the edge. This has always been my challenge -- to stop and start at the right spot.  First, I marked a dot at this point using my trusty new pink vanishing marker!  Sewing up to it but not beyond ("Take your time, girl!"), I back-stitched, cut the threads and removed the piece from under the presser foot.  Then I folded back the binding like so: 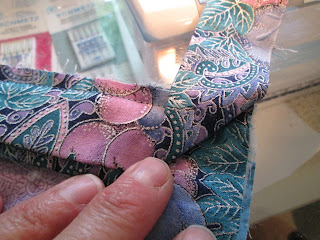 This is where the instructions used to get tricky.  I finger-pressed the angle you see there, held my breath, and, holding that fold in place with a finger, folded the binding strip back down along the next side.  Beginning at the top, I stitched it in place: 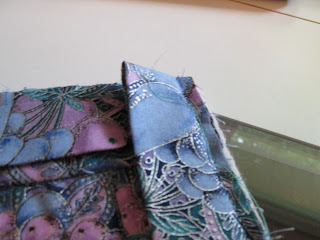 I did the same thing at each corner all the way around.  When I got to the ends, I tucked one inside the other and sewed the balance of the seam.  Look closely.  Can you see the joint? 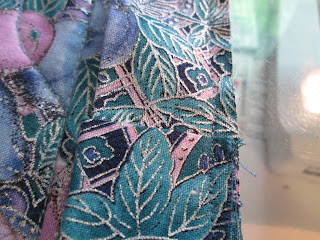 The last step was to fold the binding over to the back and pin it down for stitching.  I was amazed at how great those corners looked! 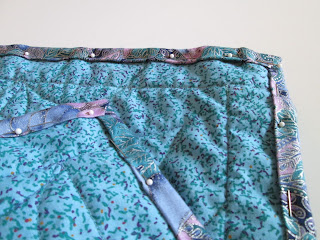 I'm sure that some of you, Gentle Readers, can mitre corners in your sleep, but for me, it's been a Big Deal -- an "alligator".  :-)  I will probably have to read the instructions step-by-step every time I do this.  One thing I know for sure, though: I will do so with confidence in future -- not with fear and trembling!

And the WIP for Wednesday?  Hand-stitch that binding down!

Catch you on The Needle and Thread Network, eh?

Yes, mitred corners are tricky when you've not done any but it's like everything else, practice makes perfect. I usually use a pin in the corner to hold the fabric and sometimes I use the edge of my machine foot which is 3/8" or thereabouts. I will still at times cut 4 separate strips for the binding instead of using a mitred corner. Nice to hear I wasn't the only one that didn't double fabric for binding.

The minute you say 'piece of cake' and don't check that last mitre is the appointment with the alligator! LOL I do double fold because it is just so nice to stitch down that folded edge. I think it also makes a nice 'fat' binding. And I AM trying to use up the stash!!!

I was once like you and feared that mitre corner on the binding but now that I have done it so many times I do it without much thought ,it is the final part of meeting the two ends that I still get confused about at times.

Have a great trip to La Belle Province. Hope all goes well. Hugs.

Well done! This is the method I have always used on my quits. It was difficult at first, but is worth the effort. Like Sheila, meeting the two ends confused me more than the miters!

Dragon slayed! Well done, those corners look great. I myself have been investigating bindings sewn on completely by machine. Gasp. Not by hand? Is that allowed? Apparently, it is. And it is much faster. If I'm to be making more quilts, I need to slay that dragon.

Thanks for the latest report about the marking pens. I haven't use this pink pen,yet. It is always good to have a variety of them for all type of fabrics.
I'm sure they will like all your presents which has been made with *love*.

glad you figured out the mitered binding, now to get the system of joining that binding with a seam at the end... tricky but again with practice you can do it!