It may seem from this post that there's a great deal going on, but it's all been sewdio work, of one sort or another.

Monday I worked on P's birthday quilt, gradually filling my design wall.  I really like how it's shaping up.  With a couple of borders, it'll be throw-sized -- and P's the kind of gal who likes to curl up on her couch with her cat, so that'll be just fine. 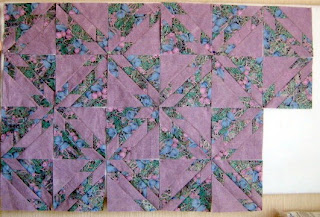 Yesterday I started a wee gift for my room-mate-to-be at the SAQA Conference, and today I finished it up. I used a couple of pieces of sun-dyed fabric from last summer's session.  The outer cover is some sort of semi-sheer of indeterminate origin (!) and the flaps inside are some sort of synthetic slippery stuff, also of unknown material.  The lining is a commercial cotton.  Or maybe a poly-cotton.  (I dyed the first two, but not the lining fabric; it was already that colour.)  All of the fabrics were given me a few years back...

The bookmark is some Treenway Silk ribbon from the Judith Montano Series in the "Cedar" colour-way; it's stitched in place and embellished with a bead or two.  Green, of course!


Speaking of silk ribbon, my order from Dharma Trading arrived yesterday, so today I took my first plunge into acid dyeing and made these, using my modest collection of Jacquard Acid Dyes. 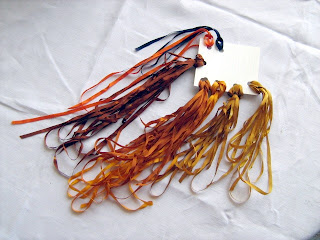 It was easier than I thought, but the mixing will take some experimenting.  The instructions on the website and the jar, and in my "Teach Yourself Visually Dyeing" book all assume you're going to produce massive quantities of dyed material.  I went quite small with my measurements -- or so I thought -- but ended up having to both dilute my dye bath and shorten the time the ribbon soaked in it, in order to get a paler product.  I have dye bath left over, however -- in two colours (brown and purple-navy), so will play with combinations of them plus water till I get what I want.


I was aiming for something I could use for dry grasses/cat-tails along the pond in "Waiting for the Train".  On the upper left corner of the card you'll see a small bright orange piece and right next to it, a dark purply-navy.
The first is pure Golden Yellow -- clearly very concentrated!!  The second was created from Golden Yellow, Sky Blue and a touch of Scarlet.  Both were good starting points.

I began with a tiny bit of ribbon and boiling water, dye and vinegar in a glass jar (recommended by a dear friend who used to run her own dye-works).  Then I dug out my dye pot, put all the Golden Yellow mixture into it and began to play.  I added a cup of the purple-navy mixture, and then measured in several cups of hot water, and added some more vinegar.  That produced the deep brown, and the slightly paler red-brown you see on the left side of the card.  Adding more water/vinegar and shortening the time in the bath produced three pieces that are closer to what I'm aiming for -- the last 3 on the card moving from left to right.

All, of course, will be used somewhere or other.  Tomorrow, I may brew up another batch, using the two original colours as my foundation, diluting and adjusting from there.  This is just too much fun to fuss over!

As for "Wonder"...the beading hasn't started yet...but this evening, most likely.

In the Knitting Department, remember the sleeveless turtleneck?  I'm doing the ribbing around the second armhole.  Almost there!

P.S. Linking up with WIP Wednesday over at The Needle and Thread Network.  Wanna join me?
Posted by Margaret at 4:47 pm

You do look busy, Margaret. All I have been doing is playing with an 18 month old!

Luv that journal and the ribbons are delicious. Keep the pot simmering. lol

Lots of projects on the front burners! I love the purple quilt and yes, you do look busy. I hope that your roommate doesn't come on your blog and see her beautiful gift; so pretty and useful! I love how you are "brewing" up dyes! Taking notes here!