I set out each morning with a list -- in my head -- of things I want to do that day.  Sometimes I write the list in one long, run-on sentence in my Morning Pages, but more often than not, it's merely in my head.  I'd like to think this reflects some ability to be flexible (never my strong suit; just ask my kids!), but in reality, I like to proceed from point A to point B and so on down the line without much to interfere with "my" plans (yes, that's God you hear laughing). 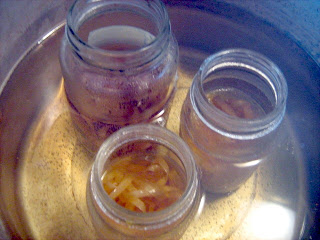 This approach differs from yesterday's in this: yesterday I put the dye bath directly into the pot.  Today, I took up the instructions from my morning e-mail, courtesy of Dharma Trading, to "Play Silk Rainbow With Dharma Acid Dyes".  Now, the dyes I've been using are from Jacquard, but I bought them through Dharma...so there you go!

Because I was dyeing small skeins of silk ribbon (wound off the spool onto my niddy-noddy and secured with scraps of 100% wool), I used the smallest jars I had on hand -- baby food jars I've used for mixing MX dyes in the past.  All had been washed free of the MX, so were ready to use for this project.

Per the instructions, I filled each jar a bit more than half-way with hot water.  I put a skein of ribbon in each. For the dye, I turned to the un-exhausted brown dye bath I had left from yesterday, and put a teaspoon in each.  In the largest jar, I added a few drops of the deep purple/navy dye bath left over.  In one of the smaller jars, I put a second teaspoon of the brown.

What about the dye bath?!  Blessedly, it had to simmer for only 20 minutes, have vinegar added to each jar (I decided to put 1 tsp. in each) and simmer another 20 before being allowed to cool.

I carted Diesel off to the vet at the appointed time.  In the interim, it appeared he'd self-drained the wound, so he was thoroughly checked over, given an antibiotic by injection, and I brought him home -- with a bottle of oral antibiotic to be given 3 times a day till finished (about 5 days).

As soon as I got him home, he ate and went out for a few hours.  Now that he's returned and had his supper, he's getting his own back.  Clearly there's no way I can sew up the second side seam of this sweater tonight: 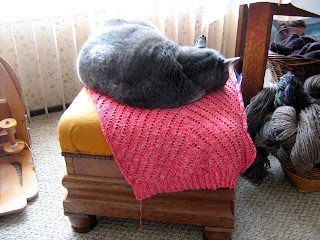 Last evening, instead of beading, I finished another row on the Atlantic Sampler, and now it looks like this (well, the bottom half of it, anyway): 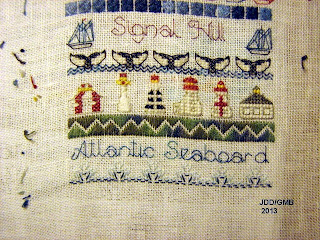 Only 3 rows to go...and the deadline (gift date) is just over a month away.

Here's how they turned out (middle right side): 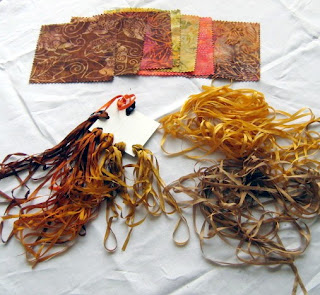 Wait!  What's that fabric? (I can hear you asking...)  Well...remember the goodies I gave away during my three-week Blog-anniversary celebration in February?  Pat was a winner of one of the surprise mid-week treats -- and she returned the favour by sending me a packet that included several batik charm squares that (purely coincidentally!) match my new ribbons!

Also in the package that arrived from her today were these yummy fabrics -- "fruit-flavoured" batiks and some landscape fabric and one that's just plain sewing goodness.  And the lovely gift card she painted and created herself! 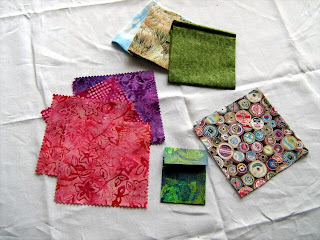 Aren't I spoiled?!  Thanks Pat!

Now where did I put that to-do list?
Posted by Margaret at 5:34 pm

Glad to see Diesel is resting comfortably! Do show the ribbons when you are done. How do you manage so many wonderful projects in one day, my friend?