SOLD! And a Surprise of Sorts...

I came back a wee bit lighter from my short trip to Calgary -- literally and figuratively.  :-)  I went down for the dentist (just routine) and returned with less plaque on my teeth.  I took with me nine miniatures to show friends there, and returned with eight.  Yep!  This one sold on Wednesday evening: 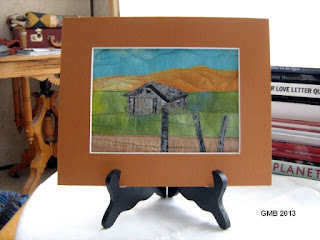 It now lives with some long-time and very dear friends of mine, D&S, and I'm thrilled -- except that now I need to hustle and make another (plus at least 3 more) for the Lacombe show, a little over a month away.  That means I also need to order more cut matts! (As MS would say, "And that's a Good Thing.")

While in Calgary I met up with several friends.  Two of them joined me for the Collaborative Quilting presentation at The Art Gallery of Calgary on Thursday evening.  Artists Linda Hawke and Cat Schick spoke about their ten-week residency at the Calgary Women's Centre.  The presentation included 2 completed quilts (there will be 8 in the end) and a short video which included interviews with some of the women who participated.  It dove-tailed nicely with the current exhibit in the gallery, which focuses on violence against women.  Some of the quilters with whom Ms. Hawke and Ms. Schick worked had come from or were still in violent domestic relationships. The artists had been given 8 quilt tops left over from a charity quilting project.  They decided to invite women at the Centre to participate in an art quilting project, using these tops as backgrounds for a variety of surface design elements, including photo transfer and hand embroidery.  The theme was sleep and dreams (while asleep or day-dreams), and the women were encouraged to express their dreams as part of the quilts' embellishment.  Once finished, the tops were quilted -- largely by hand -- in frames in the main foyer of the downtown public library, and the public who stopped by could add to the quilting.

What took the artists by surprise were the images embroidered by these women, most of whom had experienced poverty and often violence and/or abuse of some sort.  Tough times, to be sure -- and the dreams of which they spoke included running, escaping, visions of demons -- BUT the images they embroidered onto the quilt tops were anything but edgy, dark or angry.  No.  These women embroidered what the artists labelled "cliche" images: butterflies, a 'Home Sweet Home" complete with garden, and cuddly baby animals, like bunnies and lambs.  In one instance, the artists admitted to being so taken aback that they altered the piece!  Surrounding a lace-bordered embroidery of "Home Sweet Home", one of the artists cut out wee fabric houses, leaving holes in the quilt top, and appliqued them elsewhere on the same top -- ostensibly to make the piece more 'artistic' (her admission).

My companions and I were stunned.  We could understand why a woman with a tough life history might choose to illustrate "Home Sweet Home" as her dream -- even if her real night dreams were of demons -- but the artist couldn't see it.

On reflection the next morning in my journal, I had to admit, too, that in the past I, too, have been guilty of such arrogant presumption.  Et tu?

How hard it is to walk in another's moccasins!

the eye of the beholder! very thought provoking.

Thank you Margaret for posting this: i thought it was just me that had that impression of condescension from the presenter.