It all began with this photo:

I love this old church, but have yet to see the inside of it, as it's been under restoration for almost as long as I've lived here.  It's no longer a functioning church; it was given over to Mirror  by the Diocese of Calgary some years ago as a historical building.  The hope is that when it's fully restored it will be a point of interest for tourists and perhaps serve as an unconsecrated wedding chapel.  The asbestos insulation has been replaced, and the rotting foundational logs replaced (under that lovely white facade, it's a 118-year-old log building!).  What remains to be done is the shoring-up of bowing walls, the replacement of the siding, and the restoration of the chimney -- including the re-creation of some of the old bricks which have broken.

I took this photo not long after I moved here -- sometime in the late autumn or early winter of 2008-2009, and decided it might make a good miniature.

Fussy, fussy.  I used my own hand-dyed fabric for the sky, and then traced bits and pieces of the building onto fusible web (in reverse, of course, to get them to come out the right way 'round)...and then trace the tree (in reverse) and did the same.  It took me a little over 2 hours yesterday to come up with this: 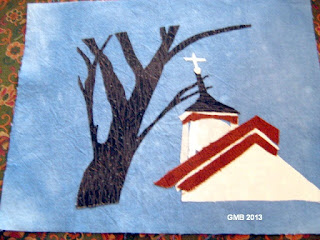 The 'sawed-off' edges are the edge of the original photo and also where the matt will begin!

Today I added some thread painting and quilting: 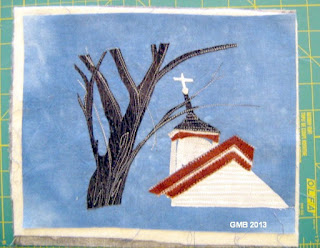 I was undecided, until I put my "Ls" around it...and it works reasonably well.  There's still a bit more quilting to do -- though I am not adding all the random branches attached to that tree!  (Artistic license!)

This miniature has taken me far longer than the others, but if it doesn't sell at the show, maybe I'll just frame it and keep it!  :-)

I really like the texture on your tree Margaret. Wish I could see it more closely. Is it done in little pieces, stitched?