I Nearly Blew It

My mother never met a cliche she didn't like.  :-)  Every once in awhile she had occasion to observe, "The road to Hell is paved with good intentions."

For me, today, TRTH was very nearly paved with good InkTensions!

It began very innocently.  I worked on "Sentinels, putting in the power lines and fence wire, and most of the prairie grasses poking through the snow.  Then, checking in with the original photograph, I noticed the shadows: 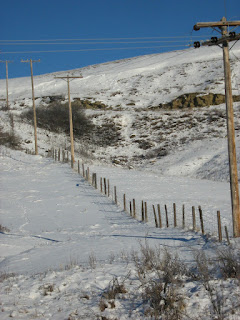 See?  There are shadows cast by the front pole and the fence posts.  If you look closely, you'll notice they're...um...blue.  Not quite as blue as the sky, but definitely blue.  Hmmm.

How to include them?

I said to myself, I said, "Self, why not quilt the shapes in the snow and colour them in ever-so-lightly with your blue InkTense pencil?"

I tried a wee bit on a scrap of the white fabric left from the snow piecing.  I wet it after colouring, and knew I'd have to do it very lightly and gently.

It wasn't horrible, really -- it just didn't go with the stark lines in my piece -- all rough edges and angles, and there were these soft, slightly runny shadows.

What to do?  Some of 'em had started to dry -- meaning they would be there permanently!

I washed it -- soaked it, really, in a tub of hot water with Synthrapol...to see if it would fade the stuff.  It did, but not enough to make me happy.

I figured, what do I have to lose?  I'm going to have to cover up those "shadows".  So I threw it in the drier and had a think.

While I thought, I cut out some more green 3 1/2" squares and made some more four-patches for Easy Street (somehow, I was short on these and didn't have enough to make the last 3 blocks).

When that was done, I scoured the stack of fabric I'd used for "Sentinels" in the first place, and decided "Okay; if it's going to be a primitive interpretation, then why not have shadows as blue as the sky?"  I found some of the sky fabric, and fused Steam-a-Seam 2 onto it.  Then I proceed to cut out shadow shapes and stick them onto the piece.  So far they're only stuck there; I haven't done the final pressing to secure them. And there are shadowy shapes below the grasses next to the fence on the far right that I don't quite know how to include, so they're not there (yet).   However, I did take this photo: 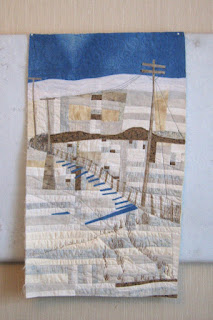 And y'know?  I rather like it.  As Peggy wrote today on her "Playing with Texture" blog, there's value in a photograph.  Even standing back from the piece in my sewing room, I wasn't sure.  But the photo gives me hope.  There's still a bit more prairie grass to stitch in, so I won't do the final straightening-up and binding till that's done, but it's just about finished.

Lesson learned: sometimes a sample isn't really a sample; it's just an excuse for one.  Never let your hurry to do something get in the way of a proper trial!

And to think I nearly blew it.

P.S. Linking this up to The Needle and Thread Network for WIP Wednesday...
Posted by Margaret at 5:16 pm

yes. I do like the blue. I am also learning the value of photos and taking time to let ideas percolate. Very nice!

Looks very good from here, you are one talented lady!

Well I think it is wonderful. I so admire how you managed to get this scene such a wonderful replica of the photo.

I am really liking this piece-well composed and I like the "new" shadows.

It is AWESOME! My daughter told a whole group of artists one day, "you know... shadows in winter are blue". They just are. Most people assume and fail to see things for what they are. I love this Margaret!!

I think the "shadow" blue is great too. If it were any paler I think it would just blend in with the gray of the snow. Good job!

What I really like is that the added blue creates movement for my eye between it and the sky. One of my design teachers always said to have a color in 3 areas. Don't know if blue fits in any where else and if that would contribute even more balance. Just a thought. Proud of you for continuing to experiment till it felt right!

'It's not a mistake, but an artistic opportunity'
-Unknown

What a creative solution to an upsetting problem. I am amazed that you did not throw up your hands.